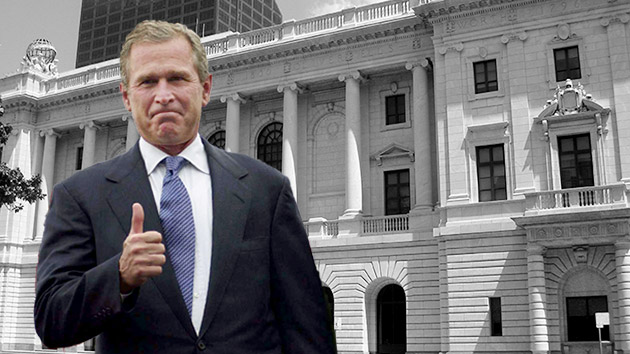 When George W. Bush departed the White House, he left behind a giant deficit and expanded government spending for Medicare drug benefits that caused conservatives to grumble. But he did make a mark that right-wingers can cheer—by shaping the federal courts for years, perhaps decades.

As Bush has retreated to painting, federal judges he placed on the bench have been implementing a conservative vision in some of the most contentious areas of federal law. The best example of this is a string of recent decisions on hot-button issues from the 5th Circuit Court of Appeals, which the ABA Journal has dubbed “the nation’s most divisive, controversial and conservative appeals court.”

The 5th Circuit handles appeals from federal courts in Texas, Louisiana, and Mississippi, and it has become increasingly powerful as the Supreme Court has been hearing fewer and fewer cases. This month, the court—which has six George W. Bush appointees out of 15 judges—infuriated civil rights and pro-choice groups with two decisions overturning lower court rulings in Texas.

In one case, the 5th Circuit cleared the way for a new Texas voter ID law to take effect just days before early voting begins, even though a lower court judge had found, after a long trial, that the law amounted to a poll tax and unconstitutional suppression of voting, particularly by minorities. (The Supreme Court upheld the circuit court’s ruling on Saturday.) In the other case, the court ruled that Texas could implement a new restrictive abortion law that would effectively shutter many of the state’s remaining abortion clinics. (The Supreme Court has temporarily blocked this abortion law.)

The 5th Circuit has been consistently hostile toward abortion rights. Prior to this recent decision, it had already okayed most of Texas’ new restrictive law that has led to the closing of 28 clinics. The law requires abortion providers to seek admitting privileges to nearby hospitals and forces clinics to spend millions of dollars to upgrade their facilities to meet the standards of an outpatient surgical center.

The appellate court did strike down an identical law in Mississippi in July, but only because it would have caused the closing of the state’s sole abortion clinic, effectively banning a constitutionally protected procedure in the state. Mississippi had argued that women could still obtain abortions in Tennessee. In the Texas case, the 5th Circuit found that under the contested law, even though women would have to trek hundreds of miles to terminate a pregnancy, they would still be inside Texas, making the restrictions acceptable.

Last year, the 5th Circuit ruled that Scott Panetti, a profoundly mentally ill Texas man who represented himself at trial wearing a purple cowboy suit and referred to himself as “Sarge,” was sane enough for execution. (Earlier this month, the Supreme Court upheld the death sentence for Panetti.) This court has never found anyone too mentally ill for execution.

After nearly six years of the Obama presidency, only 4 of the 13 federal appellate courts now have a majority of GOP appointees, and the 5th Circuit is one of them. Twenty-three judges currently sit on the 5th Circuit, including eight senior judges who are semiretired but can and do still hear cases. Fifteen of those are GOP nominees. And of the 15 full-time judges, 10 are Republican appointees, including George W. Bush’s 6. Ronald Reagan picked four of the full-time judges. As for the five active Democratic appointees, Barack Obama selected three, and Bill Clinton nominated two. There are two vacancies on the court.

Several of the 5th Circuit’s loudest voices are luminaries of the right-wing legal movement and are regular speakers at conferences hosted by the Federalist Society, the conservative legal affairs outfit. They have been prominent in the recent hot-button cases. Among them is Bush appointee Priscilla Owen, a former Texas Supreme Court justice. Owen made a name for herself on the Texas high court by opposing requests from minor girls to obtain abortions without their parents’ permission.

Last year, Owen voted to execute Panetti, the mentally ill man from Texas. She has also been a key player in earlier 5th Circuit decisions approving restrictive Texas abortion laws. In 2013, Planned Parenthood filed suit to block the Texas law that required abortion providers to obtain admitting privileges at a nearby hospital. A lower-court judge ruled part of that law unconstitutional, finding that its only purpose was to drive abortion providers out of business. He blocked that provision from taking effect. Owen wrote the opinion for a 5th Circuit panel of three judges that overturned that ruling and allowed the law to take effect. This decision resulted in the almost immediate closing of 14 of the state’s 36 abortion clinics.

In 2010, the court threw out a lawsuit filed by a high school cheerleader who’d been kicked off the squad for refusing to cheer for a basketball player she said had raped her.

In 2010, Owen was part of a three-judge panel that threw out a lawsuit filed by a high school cheerleader who had been kicked off the squad for refusing to cheer for a basketball player she said had raped her. (The athlete ultimately pleaded guilty to a misdemeanor assault charge.) These judges ordered the cheerleader’s family to pay the school district $45,000 for filing a frivolous lawsuit.

Joining Owen in the infamous cheerleader decision was another high-profile George W. Bush appointee, Edith Brown Clement. She is one of the judges who recently signed off on Texas’ controversial voter ID law, and she’s been a vociferous defender of BP in litigation over damages from the Deepwater Horizon oil spill.

In 2012, to avoid a trial, BP signed a settlement agreement with lawyers representing people and businesses injured by the spill. In the agreement, BP promised to compensate the victims. But after the claims started rolling in and created a much higher tab than BP expected, the company tried to convince the 5th Circuit to let it out of the settlement agreement. The court’s judges have been unsympathetic to the arguments—except Clement, who in May, wrote a dissent that Bloomberg Businessweek described as sending a “distress signal to the Supreme Court,” in an effort to get the high court to step in on BP’s behalf.

Last year Clement and another Bush appointee on this court, Catharina Haynes, dominated a three-judge panel that upheld a Louisiana statute that allows a woman who has an abortion to sue the provider at any point in the following 10 years, even if she signed a risk waiver. The law also prevents abortion doctors from accessing a state-run fund that helps cover malpractice verdicts and settlements. Abortion providers had argued that the law was illegal because it treated them differently than other doctors and placed an undue burden on the right to an abortion by making it difficult for doctors to practice in the state. A lower-court judge agreed, but Clement and Haynes overturned that decision.

Prior to the George W. Bush years, the 5th Circuit was already famous as a home for judges with reputations as conservative ideologues. This includes Edith Jones. A Reagan appointee, Jones in 2006, made the Texas Observer‘s list of worst judges in the state for, among other rulings, her decision upholding the execution of a man whose lawyer had slept through his trial. Jones hasn’t been part of any of this month’s controversial decisions, but in 2012, she was on a three-judge panel that upheld another Texas abortion law—a mandatory sonogram law that forced doctors to give women seeking an abortion medically unnecessary information designed to persuade women to change their minds.

Jones was frequently considered on George W. Bush’s short list as a potential Supreme Court nominee, but critics suggested that she’d never get confirmed after members of Congress learned about her performance on a sexual-harassment case. “After hearing testimony that a woman had endured, among other things, a co-worker pinching her breast at work, Jones retorted, ‘Well, he apologized,'” wrote the Observer.

Last week, the Judicial Council of the DC Circuit concluded an investigation into a misconduct complaint filed against Jones regarding a speech she gave at a Federalist Society event in 2012 at the University of Pennsylvania law school. In her comments, Jones allegedly made a host of inflammatory and racist statements, including remarks about pending cases.

According to affidavits filed with the complaint, Jones said that the death penalty provided a “positive service” to defendants because they are “likely to make peace with God only in the moment before imminent execution.” She also allegedly suggested that “African Americans and Hispanics are predisposed to crime,” are “prone to commit acts of violence,” and become involved in more violent and “heinous” crimes than people of other ethnic backgrounds. The judicial council ended its inquiry without issuing any firm finding because, it said, it could not find a recording of Jones’ remarks.

The 5th Circuit hasn’t always been a conservative bulwark. In the 1950s, it played a pivotal role in integrating the South after the Supreme Court’s landmark decision in Brown v. Board of Education. But in the past half century, it’s been dominated by ultraconservative GOP appointees who tend to be sympathetic toward the gas and oil corporations that frequently appear before the court. The 5th Circuit will likely remain in the hot seat, given that it fields litigation involving contentious redistricting fights in Texas, the BP oil spill, additional reproductive rights restrictions, and more death penalty cases.

Obama has done little to restore balance on this court. He floated the names of a couple of potential candidates almost a year ago, but he has not nominated anyone to fill the two vacancies, one of which is two years old. The delay is not just his fault. The vacancies are reserved for nominees from Texas, and usually such judicial appointments need some support from the home-state senators. But Texas’ two senators, Ted Cruz and John Cornyn, Republicans eager to oppose the president, have not been working with Obama to fill the two positions. Obama could nominate candidates without the backing of Cruz and Cornyn, but doing so would likely spark a partisan fight. Liberal judicial activists have criticized the president for being too deferential to Cruz and Cornyn. But whether that charge is true or not, Obama may end up not getting the chance to add any more judges to the 5th Circuit—especially if Republicans assume control of the Senate after the coming congressional elections. And Bush’s legacy will stand for years to come.