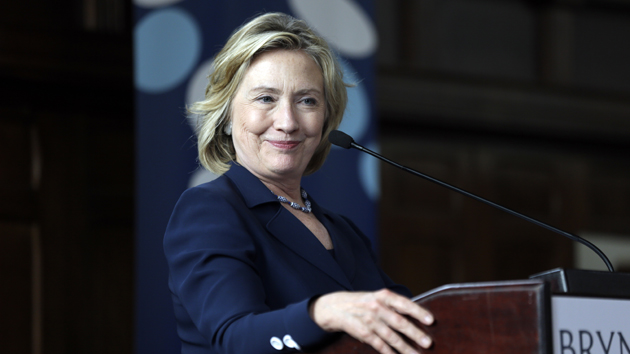 If Hillary makes it to the general election, 50 percent of 18-24 year-olds say they would support her. Just 33 percent would back a hypothetical Republican nominee. White millennials split 41-41 percent on backing Hillary in a 2016 general election, but she crushes that hypothetical Republican among minority voters: 72 percent among black voters and 63 percent from Hispanics prefer the former secretary of state.

Clinton struggled with college-aged and other young voters when she last ran for president in 2008. But as I explained in April, Ready for Hillary, the super PAC paving the way for her eventual run, has been busy this year recruiting volunteers on college campuses across the country to beef up the Clinton machine and avoid the mistakes she made last time:

The group brought in former Obama campaign youth vote coordinator Rachel Schneider to oversee outreach to voters ages 16 to 30, with a particular focus on those still in school. Schneider has spent the last few months traveling around the country to set up satellite organizations on college campuses with the goal of attracting all of the best student organizers to Clinton’s side before any other Democrat launches a presidential campaign.

“I’ve been focused on identifying students on campuses who are interested in being part of this movement from the ground floor,” Schneider says. For Democratic-leaning students interested in a career in politics it’s a no-brainer: leading a Students for Hillary group will position them as prime contenders for low-level jobs in Clinton’s actual campaign.

Ready for Hillary has continued to ramp up its college efforts since the spring, sending the Hillary Bus crisscrossing the country. Over the course of three weeks in late August and early September, the group sent the bus of staffers to about a dozen schools in the south and west, including Clemson, South Carolina State, Claflin University, the University of Arkansas, UNLV, and the University of Colorado–Boulder, to setup pro-Clinton campus groups.