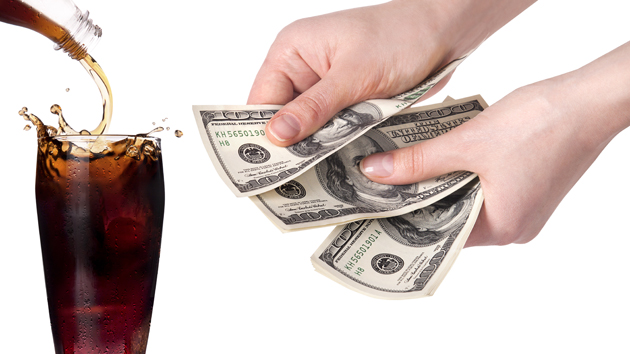 After a high-profile battle in New York, the front line in the War on Soda has moved to Northern California: next month, voters in San Francisco and Berkeley will consider whether to levy major taxes on sugary beverages.

Measure D and Proposition E sound like ordinary, small-time municipal ballot items, but in the past few months, they’ve become subjects of national attention. For Big Soda, defeating the tax in the liberal, health-conscious Bay Area would be their ultimate triumph—and kill hopes for similar taxes in other places. The American Beverage Association—lobbying arm for Pepsi and Coca-Cola—has poured Super Big Gulp–sized streams of cash into these contests: they’ve spent $7.7 million thus far fighting San Francisco’s Proposition E alone. It’s already the second most expensive ballot measure campaign in the city, and could easily break the record.

Proposition E was proposed by San Francisco Supervisor Scott Wiener and it’d place a two-cent per ounce tax on sugary beverages. (Berkeley’s Measure D proposes a one-cent tax.) It’s specific about what constitutes a taxable sugary beverage: soft drinks, energy drinks, sports drinks and juices will be subject to the tax, while milk, syrups, and alcohol will be exempt. Distributors of the drinks are meant to cover the hikes, but they’re likely to pass that cost onto retailers, so consumers will end up paying the price. So, if you’re buying a 21-ounce Coke in the city, you can expect to pay 42 cents more. If Prop E passes, San Francisco would become the first city in the country to tax soda.

Supporters say all those Cokes will generate over $30 million in revenue per year, which would be used to fund nutrition, fitness, and other public health programs in public schools and elsewhere. Beyond that, it’s projected to reduce consumption of sugary drinks by 30 percent, according to San Francisco city economist Ted Egan. All in all, Prop E seems to have addressed some of the issues that made past soda taxes hard to swallow: In nearby Richmond, a measure was sunk because it didn’t specify what drinks could be taxed, and in El Monte, Calif., their bill didn’t specify how revenue would be allocated.

Though it’s arguably one of the best-crafted soda taxes to be put to vote, the Prop E campaign has been competitive, to put it lightly. Thus far, it’s been rife with deception and nasty attacks on both sides. Buoyed by its multi-million-dollar warchest, the No on E camp has blanketed the city with ads that evoke typical anti-nanny-state rallying cries. Big Soda has funded a group called Californians for Beverage Choice, which has put up signs and sent spokesmen on TV to argue that “consumers should be able to make the choice for themselves without taxes or regulation trying to influence their behavior.”

The No on E campaign also focuses on the high cost of living in San Francisco, calling the soda tax a “regressive tax” that would disproportionately hurt low-income people. The soda lobby has been leaning on another front group, the appealingly-named Coalition for an Affordable City, to make that case. It’s put up billboards across the city featuring local shopkeepers who oppose the measure, and sponsored TV ads like this one:

The San Francisco Bay Guardian investigated, however, and found that many of the 700-plus retailers who are listed as opponents of Prop E actually favor it. The Guardian claims that the beverage lobby allegedly dispatched canvassers to get local shopkeepers to oppose the tax, without mentioning exactly what it was, or that their businesses would be included on a public list. The Guardian also alleged that the groups endorsing a no vote—they appear during the ad—were paid off in exchange. “The Young Democrats, who endorsed No on the Sugary Beverage Tax, got a whopping $20,000 for their troubles,” it said.

The Yes on E coalition, led by a group called Choose Health San Francisco, has also accused the measure’s opponents of being deliberately dishonest. In a formal complaint to the San Francisco Ethics Commission, Choose Health said the No on E committee didn’t disclose how much money it has received, and has failed to add a disclaimer that the American Beverage Association has been funding their campaign. Michelle Parker, a PTA member and supporter of E, called the soda lobby’s tactics “personally offensive.” The opposition has denied wrongdoing, and spokesman Roger Salazar countered by accusing E’s supporters of “going around, harassing our supporters and bullying them.”

For some, it might be enough to look at the millions that Big Soda has (and will) spend, and conclude that Proposition E is doomed. While it’s true the lobby has a lot of money—and some of the best consultants in the business—the measure’s supporters are hardly a ragtag bunch. Backers have raised nearly $300,000—including $50,000 from billionaire donors Lisa and John Pritzker—which is enough to mount a competitive campaign. And the political consultancy firm Erwin & Muir—which boasts a 90% success rate, according to Politico—is working for the yes camp, pro bono.*

Proposition E will need to be approved by at least two-thirds of voters to become law. Polling has found support hovering around 50%, but it could receive a bump after the San Francisco Chronicle endorsed the measure last weekend. Things could easily get nastier as Election Day nears.

Even if it fails, many are betting that its cross-bay counterpart, Measure D, will succeed in Berkeley. Former Labor Secretary Robert Reich wrote that “If a soda tax can’t pass in the most progressive city in America, it can’t pass anywhere. Big Soda knows that, which is why it’s determined to kill it here.”

The measure’s passage might not spark a nationwide movement—the ABA’s Salazar was quick to say Berkeley is “not a precedent-setter”—but it’s dangerous enough that his bosses have spent over $2 million to stop the tax there. And it’s dangerous enough to have merited national attention. If both Prop E and Measure D fail, the idea of the soda tax may go flat for years. But if one of them passes, it could very well be coming to a ballot box near you.

Correction: An earlier version of this article incorrectly identified the name of the political consultancy firm.