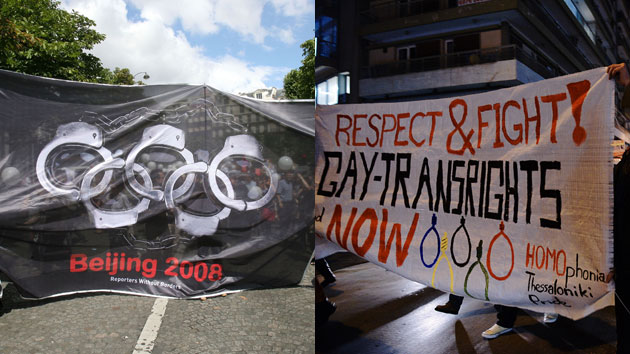 Protests of the Beijing and Sochi Olympic Games.Visual/ZUMA; Giannis Papanikos/ZUMA

Following widespread allegations of wrongdoing in both the Beijing and Sochi Olympics, human rights protections will be added to the contracts signed by future Olympic host cities. The International Olympic Committee’s president presented this change to Human Rights Watch at an October 21 meeting.

The new language will contractually require host countries to “take all necessary measures to ensure that development projects necessary for the organization of the Games comply with local, regional, and national legislation, and international agreements and protocols, applicable in the host country with regard to planning, construction, protection of the environment, health, safety, and labour laws.”

These changes make the human rights requirements for Olympic host cities more explicit than ever before, particularly with the mentions of health, environmental, and labor concerns. The new “international agreements and protocols” rule makes it clear that hosts will be required to abide by laws like the International Covenant on Civil and Political Rights, which prohibits forced labor, arbitrary arrest or detention, sentence without trial, and protects freedoms of assembly, religion, and opinion.

The International Olympic Committee will have more power to “put the scare in any host country that is not playing by the human rights rules.”

Beijing, China and Sochi, Russia floundered on some of these protections during the 2012 and 2014 Olympic Games. The international community criticized both host countries for corruption and exploitation of migrant construction workers: Sochi contractors cheated workers out of wages, required 12-hour shifts, and confiscated passports to keep laborers from leaving. In both countries, authorities regularly forced evictions and silenced media and activists. A Russian law passed in the months leading up to the Games that criminalized gay expression garnered global outrage.

Minky Worden, director of global initiatives at Human Rights Watch, says the planned wording will make it easier for the IOC to take official action if a host country breaks contract—through litigation or “the thermonuclear option,” termination. Even before such extreme consequences, she is optimistic the explicit wording will give the IOC more power to “put the scare in any host country that is not playing by the human rights rules.”

“This is a real rebuke to Russia,” she says. “The IOC wants to avoid a repeat.”

Since host cities for the next three Olympic Games have already been selected and signed contracts, host countries will be held to the new clause beginning with the 2022 Winter Olympics. Worden says this is particularly timely, as two of the finalists—Almaty, Kazakhstan and Beijing, China—have repressive governments. (The third finalist is Oslo, Norway.)

The human rights clause expands on another impending addition, previewed in a September letter from the IOC to the 2022 candidate cities. That statement promised that future host city contracts will have “an express reference…to the prohibition of any form of discrimination.”

Technically, host cities like Sochi and Beijing were already broadly obligated to steer clear of human rights violations and discrimination: The Olympic Charter calls for a respect for “human dignity” and bans discrimination “with regard to a country or a person on grounds of race, religion, politics, gender or otherwise.” But, “we’ve clearly reached a moment when the words of the Olympic Charter are not enough,” says Worden. “You have to put these guarantees in a contract and force the host country to sign it.”

Worden hopes the IOC’s action will be adopted by organizers of other mega-sporting events at risk of mishandling human rights, such as FIFA. Sharan Burrow, the general secretary of the International Trade Union Confederation, estimates in an ESPN documentary that, at current rates, 4,000 people will die in preparation of the 2022 World Cup in Qatar.