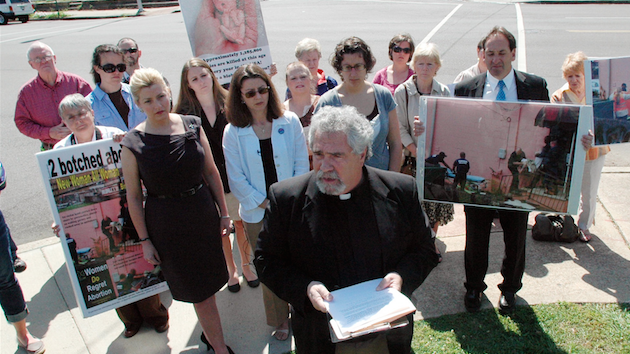 Vincent Rue, a marriage therapist best known for his discredited theories about how abortion causes mental illness, has made hundreds of thousands of dollars assembling legal teams to defend extreme anti-abortion bills. But lately, the states that hire him have been getting a raw deal.

On Monday, US District Judge Myron H. Thompson skewered Alabama for involving Rue in the defense of a law that requires abortion providers to obtain admitting privileges with a local hospital. Thompson struck down the law, which had threatened to close three of Alabama’s five abortion clinics. Notably, Thompson disregarded two arguments made by John M. Thorp, an OB-GYN at the University of North Carolina Hospital and one of Rue’s go-to expert witnesses: that complications arise from abortion more often than is reported in official statistics, and that admitting privileges are necessary to good patient care. Both claims have been key for states defending these sorts of abortion restrictions.

This is the second time this year that a federal judge has dismissed evidence brought by Rue’s favored expert witnesses. In September, a Texas judge ruling on an anti-abortion bill that would close all but six of the state’s clinics raked the state’s attorneys across the coals for bringing on Rue—and hiding his involvement.

Rue was thoroughly discredited as an abortion expert long before Alabama hired him. When he testified in two landmark abortion cases in the 1990s, judges disregarded his testimony for being personally biased and lacking expertise. Mainstream medical organizations have rejected Rue’s research on a supposed mental illness caused by abortion, “post-abortive syndrome.”

In Alabama, Rue recruited expert witnesses for the state and in one case wrote the entirety of the report the state’s witnesses submitted to the court. Rue didn’t testify. But the state paid him $82,890 for his work. It paid the two witnesses that Thompson called out in his opinion, Thorp and James C. Anderson, a Virginia emergency room physician, $40,174.75 and $76,279.20, respectively. Thorp, Rue, and Anderson did not reply to requests for comment.

Thorp based his testimony on a study he wrote for a pay-to-publish journal. (Traditional academic journals do not charge authors for printing their work.) He misplaced decimal points in his report to the court compiling abortion complication rates. When challenged about his methodology on cross-examination, Thorp told the court to “knock a point off” his estimate of complication rates.

At trial, Anderson admitted that Rue had written a report to the court that Anderson signed. Anderson also said that Rue provided most of the research for a second report Anderson wrote. Anderson further testified that he didn’t know courts had disregarded Rue’s testimony. Thompson was incredulous.

“You say you don’t know his employment or any organizations that he belongs to,” the judge asked Anderson. “Why do you trust him?”

In his Monday ruling, Thompson tried to guess at the answer: “Either [Anderson] has extremely impaired judgment; he lied to the court as to his familiarity with Rue; or he is so biased against abortion that he would endorse any opinion that supports increased regulation on abortion providers. Any of these explanations severely undermines Anderson’s credibility as an expert witness.”