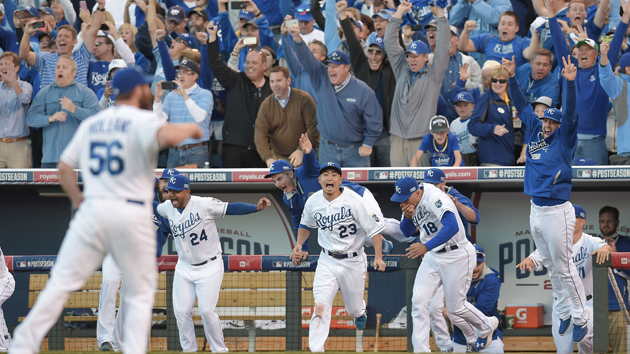 Kansas City sports fans aren’t used to celebrating. The town’s NFL team, the Chiefs, hasn’t won a playoff game since 1994. The Royals, the other major sports franchise in town, hadn’t made a playoff appearance since 1985. But local baseball fans are experiencing a rare bit of jubilation this year. Not only did the Royals sneak into the playoffs as a wild card, they won the AL pennant last week and are hosting the San Francisco Giants in game one of the World Series Tuesday night.

That’s an exciting development for any millennial-aged sports fan from Kansas City who has lived a full life without post-season baseball. It’s also welcome news for a pair of Republican politicians from Kansas, Gov. Sam Brownback and Sen. Pat Roberts, both of whom are battling their way through tight reelection bids: Research has shown that important wins by local sports teams around election season can boost an incumbent’s performance.

A 2010 study by researchers from Loyola Marymount University in Los Angeles and Stanford University’s business school looked at presidential, gubernatorial, and senate elections between 1964 and 2008, and overlaid their outcomes with results from college football games. When the local team won within two weeks of the election, the incumbent on the ballot received 1.05 to 1.47 percent more of the vote on Election Day.

But not all sports fandom is created equally, with certain victories carrying extra weight. When one of the teams that the researchers termed “locally important” won ahead of an election, they found that it could boost the incumbent’s vote share by as much as 2.42 percent—a large enough margin to swing any close contest. “We find clear evidence that the successes and failures of the local college football team before Election Day significantly influence the electoral prospects of the incumbent party,” the researchers wrote, “suggesting that voters reward and punish incumbents for changes in their well-being unrelated to government performance.”

The researchers attributed these results to an improvement in overall happiness among voters around the election, boosting a willingness to support the political status quo when they’re feeling content about other parts of their lives. The recent success of the long-struggling Royals reaching the championship round would certainly make the cut as a now important team. “These are different times in Kansas City,” declares the Boston Globe. “Passengers arriving at Kansas City International Airport on Monday were greeted with stacks of blue and white balloons with yellow crowns on top.”

Though the Royals are actually from Kansas City, Missouri, they’ve got plenty of boosters just across the border in the Sunflower State. About 20 percent of Kansas’ population resides in Johnson County, the ring of suburbs outside Kansas City and one of the pivotal electoral zones that could decide whether Brownback and Roberts get to keep their jobs next year.

Going to the World Series @Royals!

Brownback, who won by 30 points four years ago, has struggled in polls against his Democratic opponent all year as voters have turned against him over his giant tax cuts and efforts to purify the state GOP. And questions about Roberts’ residency hurt his image enough that independent Greg Orman has run about even with Roberts since the Democratic candidate dropped out of the race. Both races have tightened as Election Day approaches, so don’t be surprised if Roberts and Brownback strut around town in royal blue until November 4.