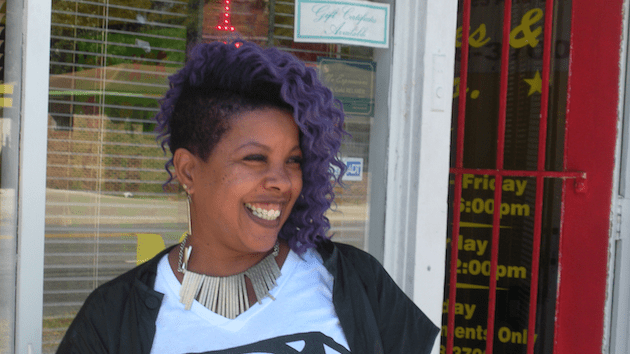 “The first question I ask my customers is: Are you registered?” Jolanda Smith says.

Smith runs a hair salon on the outskirts of Fayetteville, North Carolina. Her hair is dyed lavender and her arms are covered in heart and shooting-star tattoos. In the lead-up to the midterms, she’s lending her storefront to Democratic Sen. Kay Hagan’s reelection campaign. Smith passes out sample ballots and flyers and tells customers how to register and where their polling location is. Last Saturday morning, she was talking God and voting as she straightened a customer’s hair.

“It’s: Are you gonna vote, yes or no?” she says, sectioning off a lock and pulling it through the iron. “God gave us a choice, and the choices are always yes or no. It’s not maybe. It’s not, ‘Let me think about it,’ ’cause those are excuses…On down from choosing Christ to voting. You gonna vote? Yes or no?”

Hagan’s campaign knows that black voter turnout could decide her fate—and, by extension, determine which party controls the Senate for the final two years of President Barack Obama’s term. If African-Americans manage to turn out at presidential-year levels—if they’re at least 21 percent of the electorate—Hagan will probably win, says Tom Jensen, director of the North Carolina-based polling firm Public Policy Polling.

That’s why the Hagan campaign, and its coordinated get-out-the-vote organization Forward North Carolina—along with the NAACP, state Democrats, and get-out-the-vote outfits—launched unprecedented efforts this year to mobilize black voters.

The president reminded him to vote this year, he says: “Obama sent me a letter.”

Those efforts are paying off. On the first day of early voting last week, 76-year-old Ruben Betts was sitting on the curb in a shopping center parking lot wearing an “I just voted” sticker on his sweater. The president reminded him to vote this year, he says: “Obama sent me a letter.” As of Thursday, 24 percent of early voters in North Carolina were African-American, according to records from the state board of elections. That’s up from just 17 percent at the same point during the last midterm elections in 2010.

The Hagan field operation, which has 40 offices, 100 staffers, and 10,000 volunteers, is the largest that North Carolina has ever seen in a Senate race. By comparison, the get-out-the-vote campaign for North Carolina Secretary of State Elaine Marshall’s failed Senate bid in 2010 was almost entirely run by volunteers. “We had no money, I mean no money,” says Thomas Mills, a Democratic political consultant who helped coordinate Marshall’s field operation. “And maybe five paid staffers. The difference in what they’ve got now—it’s just not even same thing. There’s no comparison.”

Democrats have spent $1 million on ads aired on black radio stations. The Democratic Senatorial Campaign Committee partnered with the Congressional Black Caucus this month to send black lawmakers on a bus tour through North Carolina and five other battleground states. And Hagan’s campaign is collaborating extensively with black clergy across the state and roughly 150 black small business owners like Smith who are helping turn out voters this year.

Smith says the main issue that convinces her customers to go to the polls is health insurance. (North Carolina didn’t expand Medicaid, so about 500,000 poor North Carolinians are still without insurance.) Jobs top the list, too. Smith’s shop sits on Murchison Road, one of the main drags leading out of Fayetteville. The further you drive from the town center, the less money there is—the storefronts become more faded, the sidewalks get weedier, the landscape grayer. “It’s hard to get a job even if you have a degree,” she says.

Smith adds that anger over the August shooting of Michael Brown in Ferguson, Missouri, will also bring people in her community out on Tuesday. “It was more than just him,” she notes, referring to the police brutality she witnesses regularly in her community. “You have some in the system that say, ‘I’m gonna hide behind this badge and use it for injustice instead of justice’…To us it feels like it’s racist.”

“My parents voted til the day they died. I grew up in segregation. I vote every election.”

T-omnis Cox says he feels like a potential Michael Brown. A 23-year-old who works at a chicken plant in eastern North Carolina, he was hanging out in front of a corner liquor store in Goldsboro last Thursday evening. “It’s hard out here in the world,” he says. “Every day, we’re ducking from cops, we’re ducking from law.” Cox says he’s going to vote for Hagan because “Republicans don’t care about the poor.”

Hagan’s campaign has also reached out to African-American churches as a key component of its voter mobilization effort, urging pastors around the state to help with voter education and registration.

The Rev. Dumas Alexander Harshaw Jr. says his church in downtown Raleigh, First Baptist—which was founded by freed slaves—has always been political. This election cycle, the church has been helping voters register, and handing out sample ballots as well as guidelines on how and where to vote. Last Sunday, Harshaw invited Dr. Everett Ward, the president of St. Augustine’s University, a historically black college in the city, to speak to the members of First Baptist about voting.

“We’ve seen this movie before,” Ward tells the congregation, referring to the slew of policies Tillis and his fellow Republicans in the state Legislature have enacted since 2012 that disproportionately harm minorities. “It had the same title in 1895, in 1958, in 1968: ‘The South Shall Rise Again.'” A few amens rise from the pews. If North Carolina sends Tillis to Washington, Ward continues, “we will lose more opportunity for upward mobility, access to healthcare will disappear, access to higher education will disappear.”

So go vote, he says. “Throughout history…When our people faced discrimination and injustice, we answered the call.”

Not everyone needs to be convinced to exercise their civic duty. “People died so I might have the right to vote,” says Mary Bethel, who is lending her Fayetteville storefront to Hagan’s ground campaign. Last Friday afternoon, she sat at her desk among stacks of papers, envelopes, Post-its and grandchild photos in her small tax shop on Murchison Road, wearing bright red lipstick and lightly smudged glasses. “My parents voted til the day they died,” she adds. “I grew up in segregation. I vote every election.”

Tillis’ record as A leader of the unpopular state Legislature has made it easier for people like Smith and Ward to get black voters to the polls. “Kay Hagan, to me she’s wishy-washy, she’s two-faced. But Tillis is an out-out crook,” says Michael Curtis, a 65-year-old unemployed former construction worker who lives in Raleigh. Democrats haven’t done much for Curtis—he’s been out of a job since Obama was elected, and says he doesn’t have health care—but he’s still voting Hagan. Last year, Tillis voted against expanding Medicaid in North Carolina, which would have provided coverage to a half million uninsured North Carolinians. Tillis led a GOP push to cut funding for substance abuse treatment centers by 12 percent. In 2013, he and his fellow Republicans slashed unemployment benefits for 170,000 North Carolinians and eliminated the state’s Earned Income Tax Credit, while cutting taxes for rich people. And Tillis backed the harsh voter suppression law, too.

These bills and others Tillis and fellow Republicans forced through after they took control of both the legislature and the governorship in 2012 led the NAACP’s Rev. William Barber to launch the Moral Mondays movement in April 2013. For 74 straight weeks now, protesters have held demonstrations near the state capitol demanding a retreat from the state’s sharp right turn.

Now the NAACP is harnessing that anger to get voters to the polls in the most massive mobilization effort the group has ever made in a non-presidential year. Last Thursday, the first day of early voting in the state, the NAACP led 32 marches to the polls—more than in any previous midterm year. Barber’s organization is also calling all of the 286,000 African-Americans who voted in 2012 and 2008 but didn’t vote in 2010, helping register thousands of new voters, buying radio ads, and reaching out to churches. “African-Americans need to vote because we’re the ones who know the most about voter suppression,” Barber told Mother Jones.

If Hagan loses, though, it won’t be African-Americans’ fault. It will be because too many centrist Democrats voted Republican, Barber says. There are 800,000 more registered Democrats than Republicans in North Carolina, many of whom are white. “You don’t lay the blame of this election on black people.”