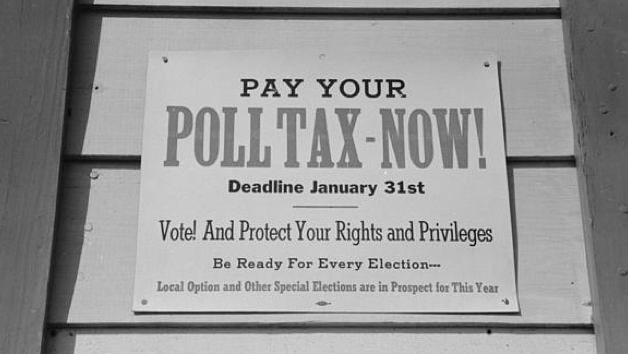 On Saturday morning, the Supreme Court ruled that Texas’ harsh voter ID law could remain in effect for the upcoming midterm elections, potentially disenfranchising some 600,000 mostly black and Latino voters. In her dissent, Justice Ruth Bader Ginsburg wrote that the law may be “purposefully discriminatory” and warned that it “likely imposes an unconstitutional poll tax and risks denying the right to vote to hundreds of thousands of eligible voters.” And Ginsburg noted that Texas’ 2011 law falls in line with the state’s long history of discriminatory voting laws. Here is a look at that history, based on expert testimony by Orville Vernon Burton, a professor of history at Clemson University, and Barry Burden, a professor of political science at the University of Wisconsin-Madison:

1865: Voter intimidation. Beginning with emancipation, African Americans in Texas were regularly denied the right to vote, through intimidation and violence, including lynching.

1902: The poll tax. The Legislature added a poll tax to Texas’ constitution in 1902, requiring voters to pay a fee to register to vote and to show their receipt of payment in order to cast a ballot. The poll tax was equivalent to most of a day’s wage for many black and Mexican workers—roughly $15.48 in today’s dollars.

1918: Texas enacts an anti-immigrant voting law. The legislation banned interpreters at the polls and forbade naturalized citizens from receiving assistance from election judges unless they had been citizens for 21 years.

1922: Texas tries a new type of all-white primary. In 1918, black voters in Texas successfully challenged a nonpartisan all-white primary system in Waco. The state Legislature got around this snag by enacting a law banning blacks from all Democratic primaries. Because the Democratic Party was dominant in the South at the time, the candidate it selected through its primary would inevitably win the general election. Anyone voting in the party’s primary had to prove “I am white and I am a Democrat.”

1927: Texas tries a third type of all-white primary. After the Supreme Court struck down Texas’ all-white Democratic primaries, the Legislature got crafty again, passing a new law that allowed political parties—instead of the state government—to determine who could vote in party primaries. The Texas Democratic Party promptly adopted a resolution that only whites could vote.

1932: Texas tries again. In 1932, the Supreme Court struck down Texas’ white primaries once more. In response, the Democratic state convention adopted a rule keeping nonwhites out of primaries. The high court initially upheld the new system.

1944: And again. The high court eventually overturned the convention-based white primary system in 1944, but party leaders could still ensure that county officials were elected by whites. A nonparty county political organization called the Jaybird Democratic Association had for decades screened candidates for nomination without allowing nonwhites to participate. The Supreme Court only invalidated the practice in 1953.

1963: Long live the poll tax! In the middle of the civil rights era, Texans rejected a constitutional amendment that would have ended the poll tax. Efforts to repeal the tax were labeled a communist plot by mainstream Texas pols and newspapers. The tax remained in place until 1966. Research shows it dampened minority turnout until 1980.

1970: Texas draws discriminatory districts. The Supreme Court ruled in 1973 that the state’s 1970 redistricting lines were intentionally discriminatory. In each redistricting cycle since then, Texas has been found by federal courts to have violated the US Constitution or the 1965 Voting Rights Act.

1971: The state attempts to keep black students from the ballot box. Once 18-year-olds got the right to vote in 1971, Texas’ Waller County became a majority black county. To stave off the wave of new African American votes, county officials fought for years to keep students at the county’s mostly black Prairie View A&M University from accessing the polls.

1981: Texas draws discriminatory districts again. After the state redistricted a decade later, the attorney general found that two of the new districts were discriminatory and violated the Voting Rights Act. (Since 1976, the Justice Department has issued 201 objections to proposed electoral changes in Texas due to the expected discriminatory effects of the measures.)

2003: And again. In a 2006 ruling, the Supreme Court found that one of Texas’ recently redrawn counties violated the VRA.

2011: Texas enacts its infamous voter ID law. The state’s voter ID law is the harshest of its kind in the country. Poll workers will accept fewer forms of identification than in any other state with a similar law. Earlier this month, a federal trial court struck down the law, ruling that it overly burdened minority voters. The Supreme Court reversed that court’s ruling this past weekend.