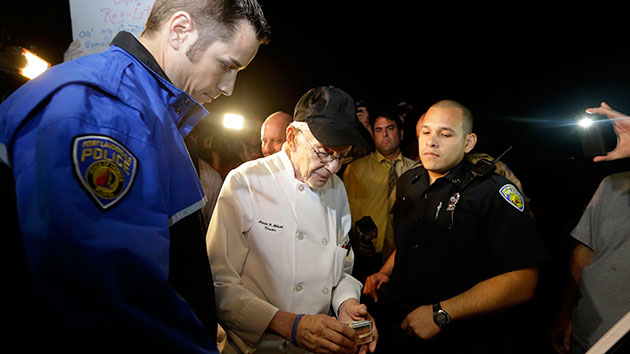 Last week, 90-year-old World War II veteran Arnold Abbott made national headlines when he got busted by cops in Fort Lauderdale, Florida twice in one week—for giving out food to homeless people. While serving a public meal on November 2, Abbott told the Sun-Sentinel, “a policeman pulled my arm and said, ‘Drop that plate right now,’ like it was a gun.” Abbott runs a nonprofit group that regularly distributes food in city parks. Because of an ordinance the city passed this October that restricts feeding the homeless in public, his charity work is now potentially illegal.

Abbott was cited again three days later in a different city park. Now the retired jewelry salesman is facing up to 60 days in jail or a $500 fine. And he’s not the only one risking jail time for generosity: 71 cities across the country have passed or tried to pass ordinances that criminalize feeding the homeless, according to Michael Stoops, director of community organizing at the National Coalition for the Homeless. 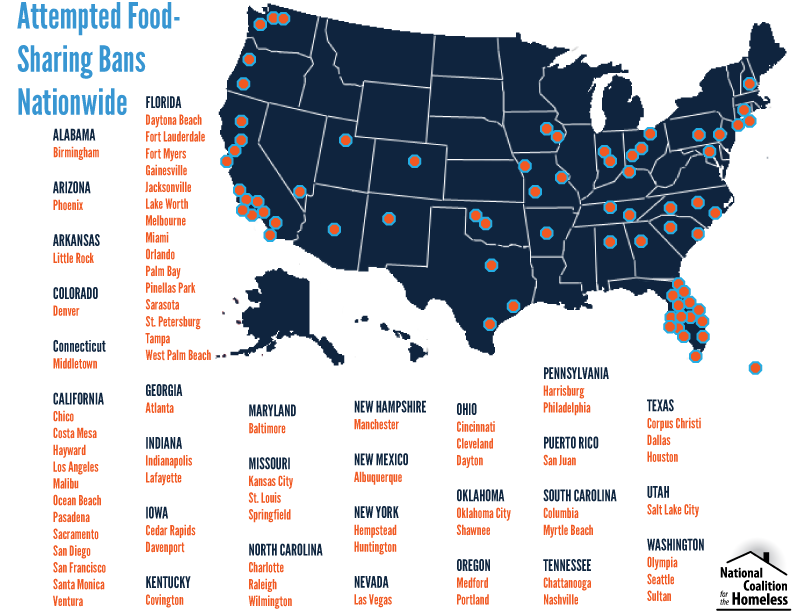 National Coalition for the Homeless

The number of cities trying to pass these so-called “feeding bans” is on the rise, says Stoops. An October report by the National Coalition for the Homeless found that since January of 2013, 22 cities have successfully passed restrictions on food-sharing, and the legislation is pending in nine other cities. (Fort Lauderdale’s measure passed a few days after the Coalition’s report published.)

Most of these measures regulate public property use, especially parks, by either requiring permits to share food on public property or banning the practice altogether. Citations for violating these laws are not uncommon. In Orlando in 2011, more than 20 activists got arrested while ladling food for about 35 people in a park, in violation of the city’s restrictions on feeding the homeless. In 2013, police threatened to arrest members of a Raleigh, North Carolina church group who regularly hand out coffee and sausage biscuits to the needy on weekend mornings. Just this May, six people in Daytona Beach, Florida were fined more than $2,000 for feeding homeless people at a park. (The fines were ultimately dropped.)

“They don’t want the homeless in the downtown areas. It interferes with business.”

A few cities have imposed food safety precautions, like requiring charities to get a food handler’s permit, or mandating that they only serve hot food prepared in approved locations or in the form of pre-packaged meals. These sorts of restrictions regularly shut out donated meals. And in many cases, they seem to be unfairly targeting the homeless: When the issue of food safety was raised during a court hearing on Myrtle Beach, South Carolina’s food-sharing law, the legal director of the state’s ACLU chapter pointed out that similar restrictions weren’t being levied against family reunions in parks, for instance, and that it had never received a single report of homeless people getting sick from the food. A Utah state representative said the same thing about Salt Lake City’s food-sharing law.

Stoops says that the uptick in food-sharing restrictions is driven in part by what cities perceive to be the rising visibility of the homeless. “They don’t want the homeless in the downtown areas. It interferes with business,” Stoops says. “Cities have grown tired of the problem, so they think by criminalizing homelessness they’ll get rid of the visible homeless populations.”

South Carolina’s ACLU chapter pointed out that it had never received a single report of homeless people getting sick from the food.

Data doesn’t back up the notion that homelessness has grown more apparent: Between 2007 and 2014, homelessness decreased by 11 percent, according to the Department of Housing and Urban Development’s point-in-time counts, considered the most scientific census of the homeless. Numbers of the unsheltered homeless, who are typically more visible, fell by 23 percent between 2007 and 2013.

Still, visibility persists as an oft-cited motivator for those who support these measures. “The food sharing itself was not necessarily the issue, but there was a host of ancillary behaviors when people gathered after the food sharing,” Kelly McAdoo, the assistant city manager of Hayward, California, told NBC after the city enacted restrictions for food-sharing on public property this past February. She said people would stay in the public park drinking, relieving themselves, and fighting; other residents “wouldn’t feel comfortable coming to these parks.”

Others say that food-sharing should be curbed because it enables homeless people to stay homeless. Stoops disagrees with that view. He notes that challenges like lack of job opportunity and mental or physical disability are what cause homelessness—not the occasional free meal.

For now, all eyes are still on Fort Lauderdale. Abbott has gotten calls from all over the world, and he confronted the city’s mayor on live TV this past Sunday. Now he’s bracing himself for more altercations with police. Last weekend, Abbott promised to return to the park where he’s served meals to the homeless for more than two decades: “We will continue as long as there is breath in my body.”