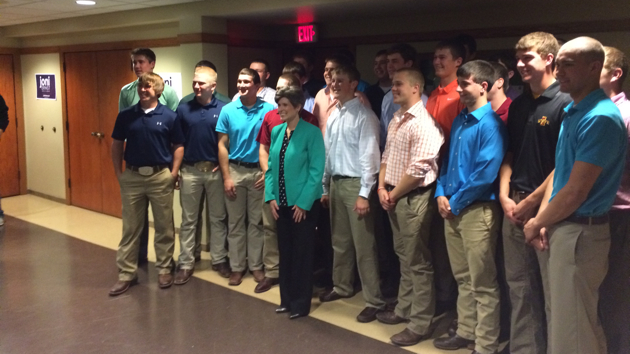 The frat brothers of Alpha Gamma Rho were on their best behavior Monday night—khakis with creases and matching polos as far as the eye could see. Joni Ernst, the Republican Senate candidate, had stopped by Iowa State University in Ames to round up a few last votes. “With all of your help, she’ll be Iowa’s next leader in the nation’s capital,” one baby-faced, blond fraternity fellow said by way of introduction, handing the microphone to Ernst, as another student put Katy Perry’s “Roar” on the speakers.

This was a Republican-heavy frat, junior Kellen Suntken and senior Tanner Stutsman, both agricultural studies majors, had told me before the event. “Just a lot of common sense,” Suntken said, when I asked why he liked Ernst. “A lot of Republican values as far as that mother/soldier background. She’s realistic and down to earth in what Iowans want, what Iowans need.”

Not all Iowans, though. As soon as Ernst got ready to talk, a group of about 15 rose from the crowd and started an Occupy Wall Street-style mic check, drowning out the candidate. “Joni Ernst does not represent Iowans,” they chanted. “[She] is a puppet of the Koch brothers.” Eventually, the frat brothers physically pushed them out. “Private property, you are no longer invited,” one of them said, as he shoved the protesters out the door. All the while, Ernst stood at the front of the room, smiling awkwardly.

“It happens,” she said once the bedlam had died down. “I’ve seen much worse, although it was overseas in Iraq.” From there, Ernst slid into her routine stump speech, a talk light on substance but heavy on how she understands foreign policy better than her opponent, Democratic Rep. Bruce Braley, because she served in the second Gulf War. With no specific talking points for college students, her only lines tailored to the setting involved a string of jokes about pulling an all-nighter on her final campaign trip across the state: “Believe me, we have a case of [Monster] on the bus.”

When I stepped outside afterward, the protesters were still there, shouting from the sidewalk, as the Alpha Gamma Rho brothers glared down from their perch by the front door. They were supporters of Ernst’s Democratic opponent, Bruce Braley, ISU student Joseph Lekowski told me, and they were participating in a project called Vote Mob, which, according to its website, tries to “go where folks are at and do wild and crazy things. VOTE MOBS [sic] do flash mobs, public art, guerilla theater, direct action, social media, bar crawls, spread memes, the whole nine.” The protesters chanted in a call and response style: “Joni Ernst does not believe in a federal minimum wage,” they started. “Joni Ernst does believe, that $7.25 is good enough for Iowa. I don’t know what Iowa Joni Ernst is living in. But it’s not the Iowa I live in. It’s not the Iowa you live in.” Then the police arrived to usher them away.