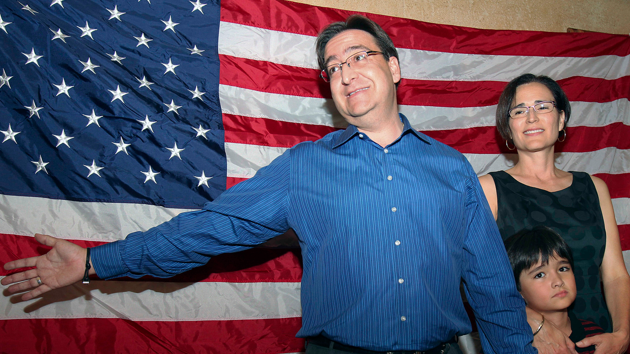 The only competitive congressional race in Texas this year pits incumbent Democratic Rep. Pete Gallego against Republican William Hurd in the massive 23rd district, which stretches across the entire southwestern part of the state. It’s also the race most likely to be affected by Texas’ strict new voter ID law. That’s bad news for Gallego.

Texas’ new voting law requires that voters provide an approved form of government-issued photo identification before casting a ballot. Minority voters, who tend to vote Democratic, are less likely to have a government-issued ID. The 23rd district is 70 percent Latino. “That has to benefit Hurd slightly and hurt Gallego slightly,” Mark Jones, chairman of the Rice University Political Science Department, told the El Paso Times in mid-October.

Gallego told the Times last month that he expected some people to be prevented from voting because of the new law: “If one voter gets turned away from the polls, that’s one voter too many.”

On election day, though, Gallego’s campaign was more upbeat. “We spent months both communicating with potential voters about the voter ID law as well as training organizers to be able to educate Texans on what they need to bring with them to the polls,” a spokesman for the campaign told Mother Jones Tuesday. “We’re hopeful that voters will be able to participate in the process and have their voices heard today.”

The race in the 23rd district is the most closely watched in the state, with a combined total of about $6 million spent so far by the campaigns.

Last month, a federal trial court struck down Texas’ voting law, ruling that it overly burdened minority voters, and as such violated the 1965 Voting Rights Act. But two days before early voting began, the Supreme Court upheld the law. More than 600,000 registered voters in Texas who lack appropriate ID could be affected by the new rules.

Republicans in the Texas legislature had first introduced the voter ID law in 2011, but the state wasn’t able to enact the measure until 2013, after the Supreme Court had struck down the part of the Voting Rights Act that required certain states, such as Texas, that have a history of discriminating against minority voters to get approval from the federal government before implementing new voting restrictions.

It’s hard to tell if the law has already kept voters from the polls. In the early voting period that ended October 31st, 1,715,731 total votes had been cast. That’s down from 1,731,589 over the same time period during the 2010 midterm elections.