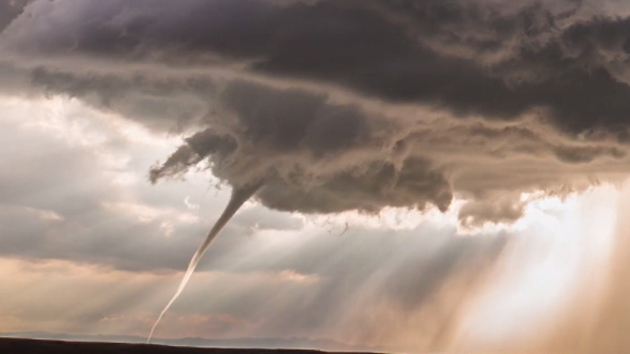 A couple of months ago I posted an amazing time-lapse video called Stormscapes, showing storms and mesocylcones, created by photographer Nicolaus Wegner. It’s really worth watching; seeing those swirling, dark clouds forming vortices over the Midwest is terrifying and mesmerizing.

Wegner contacted me recently; after a year of storm chasing he put together another video, Stormscapes2, and it’s way, way better than the first one. In fact, I’d say it’s seriously one of the most incredible weather videos I have ever seen.

Make this hi-def, full screen, and crank the volume up, because holy yikes.

From the opening sequence to the last frame, that’s magnificent. I was also really impressed by how Wegner let the music inspire the editing, and it really adds to the look and feel of the video.

The creepy oncoming storm sets the mood immediately, but then the double rainbow and crepuscular rays (shadows of clouds leaving long, dark shadows in the sky) converging on the horizon provide a brief interlude. Very brief.

Mesocyclones! Lightning! Exploding cumulonimbus clouds! Devil’s Tower! And then, at the end, one of my favorite kinds of clouds: bulbs of mammatus clouds hanging down. Those are really peculiar, and it’s not at all clear why they form. Their shape gives rise to their name, because they look like mammary glands. Seriously.

I’ve seen mammatus clouds just once, and it was unearthly. They’re harbingers of severe weather, and Wegner mentioned he got that sequence the day a series of tornadoes hit the town of Wessington Springs, South Dakota. The town was devastated, but due to the work of the National Weather Service, not a single person was killed. They predicted the conditions were ripe for tornadoes, issued a warning, and people were able to get to safety in time.

That’s amazing, but that’s science. We’ve learned so much about the weather that we can predict with pretty good accuracy where and when tornadoes can form, and get people to safety.

As I watch Stormscapes2, I’m in awe of the beauty of weather, but I’m also uplifted. We understand a lot of these phenomena very well, and the things we don’t understand, we learn. And when we learn, we make things better. We save people’s lives.