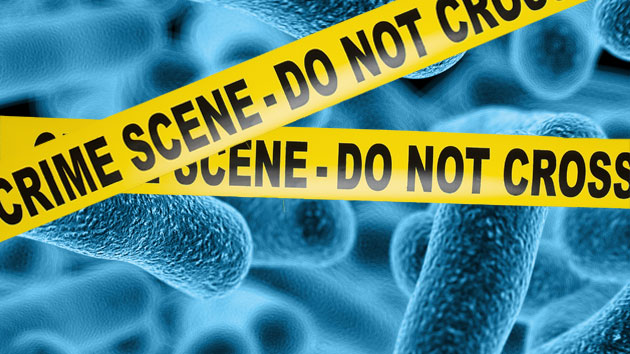 Could the trillions of bacteria living on the human body help identify and convict rapists? That’s the question raised in a fascinating new study by a team of Australian researchers.

The paper is the latest in a growing body of research on the microbiome, a term that refers to the microorganisms residing in and on our bodies. These microbes outnumber our own cells 20-to-1. And each person’s microbiome is unique. Recent research has suggested that in humans, a healthy microbiome may play an important role in everything from speeding up metabolism to fighting disease, and major companies like PepsiCo and Monsanto have funded studies examining the bacteria living in our gut. (As Mother Jones‘ Gabrielle Canon reports, though, some of the hype surrounding the microbiome might be overblown: It probably isn’t the solution to all your health problems.)

Silvana Tridico, the lead author of the new study, says her work—which appears in the journal Investigative Genetics—is the first to explore whether the microbiome on a person’s hair contains an identifiable “microbial signature” that could be useful as forensic evidence.

The researchers found that the microbes on each person’s pubic hair remained stable over time—except after sex.

Tridico, a researcher at Murdoch University who has worked as a forensic biologist for more than 30 years, believes that the bacteria residing on pubic hair may be individualized enough to identify perpetrators in sexual assault cases for which traditional DNA evidence isn’t available. According to the FBI, hair is one of the most common sources of DNA evidence recovered in criminal investigations. However, as the study notes, hairs recovered as evidence are often missing their roots, which means they lack sufficient nuclear DNA—essentially a person’s genetic blueprint—to identify the individual they came from. But even if a person’s nuclear DNA is missing from a piece of hair, other organisms’ DNA might still be present. That’s where the bacteria comes in. According to the the study, some of the hairs without roots could still “provide a microbial fingerprint to augment other results.”

Tridico and her colleagues studied three men and four women, collecting hair samples from each of them at three different points in time over a seven-month period. The researchers then analyzed the microbial DNA—that is, the genetic makeup of the bacteria—found on the hairs. They discovered that males and females had marked differences in the microbial communities living on their pubic hair. They also found that these microbial communities possessed unique characteristics that “can enable discrimination between individuals.”

What’s more, the researchers found that the microbes on each person’s pubic hair remained stable over time—except after sex.

When they analyzed samples from a cohabitating couple that had sex 18 hours earlier, they found that these people’s microbiomes had “shifted dramatically,” becoming much more similar to each other. In other words, the microbes appear to have been transferred from one partner to the other during sex. “This present study is the first to suggest cross-transference of pubic/genital microbial taxa as a result of intercourse,” the study notes.

These results are, of course, preliminary. But Tridico is optimistic that one day we’ll be able to use the science of microbial DNA in court, and she says she plans to present her results to law enforcement professionals and others at the upcoming meeting of the Australian and New Zealand Forensic Science Society. “Although further analyses need to be conducted,” write the scientists in their Investigative Genetics article, “this initial finding bodes well for future forensic applications involving sexual crimes.” As Tridico notes, the study will need to be performed on a much larger scale—the results from one couple are certainly not enough to prove that the transfer of microbes happens in a consistent and predictable manner during intercourse.

Other experts agree that more research is needed.

“I think these results are intriguing but preliminary,” said Rob Knight, a University of Colorado-Boulder scientist specializing in microbiomes, in an email. “Data from one cohabiting couple isn’t sufficient to establish forensic utility, but it does suggest that this direction is worth exploring in more detail.” He added: “I don’t think the claims about transfer of bacteria during sexual intercourse and their use for forensic purposes are sufficiently established by this study although it would not be surprising if many bacteria were transferred during this process.”

Jonathan Eisen, a biologist at UC Davis, is skeptical that the study’s findings will turn into a reliable forensic technique that could be used in real-world investigations. “For this to work, it would have to have low false positive and false negative rates,” he said in an email. “After all, we do not want to be implicating people who are innocent or clearing people who are guilty. And this to me seems to be a very difficult thing and their paper shows no evidence that this is possible at this point.”

Still, Tridico and her colleagues hope that future research will help demonstrate the utility of the microbial footprint. “We believe that with further development, bacterial profiling of hair will become a valuable addition to the forensic toolkit,” the study concludes.