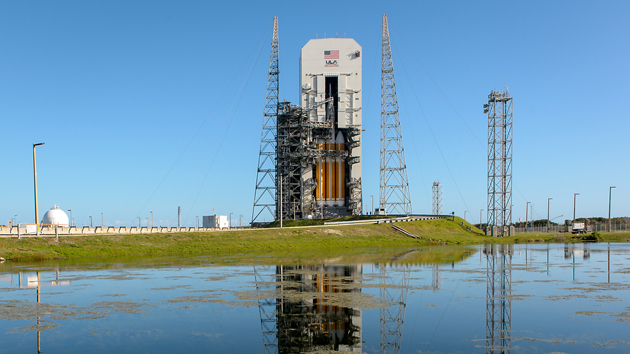 The Orion capsule waiting on the launchpad the day before ignition.NASA/Bill Ingalls

Update: NASA had to postpone the launch, which was originally scheduled for Thursday morning, because of a problem with a valve. The next opportunity to test Orion will come early Friday morning. This post has been updated to reflect the change.

It’s been 42 years since a human last traveled outside of low-earth orbit, the barely-out-of-the-atmosphere band of space that communications satellites and the International Space Station call home. But Friday morning, NASA will take a step closer towards once again sending humans to the Moon—and perhaps beyond. At 7:04 am, the agency will launch the first unmanned test run of its Orion spacecraft, sending it up from Cape Canaveral for a two-orbit spin around the planet—a trip that, if all goes well, will last for 4.5 hours before Orion lands in the Pacific Ocean. You can watch the launch live here or, at the appointed hour, in the video below:

No one will be aboard Orion for the test flight. But the spacecraft, which is designed to be used for future manned missions to asteroids and eventually the Moon and Mars, is the first NASA capsule since the Apollo program that’s designed to send humans beyond low-earth orbit. It is slated to travel 3,600 miles above the planet’s surface this week—about 16 times farther out than the International Space Station.

But it’ll be a long time before NASA begins sending humans back out towards the stars. That’s due, in part, to the state of rocket science. NASA is using a Delta IV rocket to launch Orion into the sky. But the Delta IV is an older technology that is supposed to be a placeholder until NASA finishes work on the Space Launch System, a larger rocket that will blast the Orion capsule off on long-distance missions. That new system won’t be ready until at least 2018, which means a manned mission isn’t likely until the 2020s, with a Mars mission not on the docket until the 2030s. (And given the recent frequent delays in long term NASA missions, these dates could easily get pushed back more).

The Orion was originally designed for President George W. Bush’s Constellation program, which aimed to return Americans to the moon by 2020 at the latest—a step towards a mission to Mars shortly thereafter. President Obama scrapped the Constellation program, which had been underfunded and nowhere near meeting its deadlines, shortly after taking office—sparing only the Orion capsule. Space policy has been a low priority for the  administration ever since. Obama has left designing a replacement for the Space Shuttle’s low-earth-orbit work to the private sector, and hasn’t put up much of a fight against objections from congressional Republicans that his plan to send humans to visit an asteroid is expensive and unnecessary.

Orion’s launch could be the first step toward a bold new space program—or a flashy whimper of a doomed vision. But either way, big rocket launches are always exciting to watch, so tune in here.