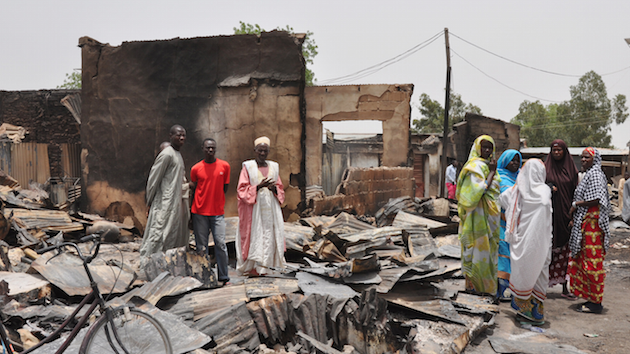 Residents stand outside burnt homes in Gambaru, Nigeria after a Boko Haram attack in May 2014.Jossy Ola/AP

Update, Thursday, January 15, 2015: New satellite imagery released by Amnesty International shows the extent of the devastation Boko Haram has visited upon northern Nigeria over the past week. Below are before and after images of the town of Doron Baga. Healthy vegetation is colored red. 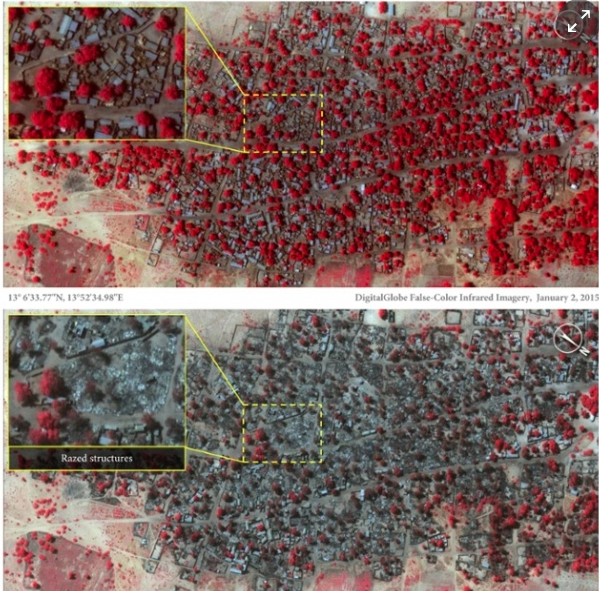 The Islamist militant group may now control up to 20 percent of the country, according to NPR. Journalists are unable to report on the killing in the north, because approaching the area would be a “death wish,” The New Yorker’s Alexis Okeowo told host Melissa Block Tuesday.

Update, Friday, January 9, 2015: On Friday morning, Amnesty International said the latest Boko Haram attack could be the “deadliest massacre” in the group’s history, if the early reports that as many as 2,000 people were killed turn out to be true.

This week, Boko Haram, the Islamist terror group based in northern Nigeria, launched a massive attack on the town of Baga, killing dozens, according to Reuters. Other initial reports put the number of dead in the hundreds or thousands. The attack is the latest in the group’s increasingly bloody campaign to establish an Islamic state in the West African country. The group attained international infamy last April after it abducted some 300 girls. More than 200 of them are still missing.

Over the course of this Tuesday and Wednesday, the militants set fire to buildings in Baga and shot indiscriminately at civilians. Nearly the entire town was torched, according to the BBC. Baga, which had roughly 10,000 residents, is now “virtually non-existent,” Musa Alhaji Bukar, a senior government official, told the British news agency.

Here’s more from the BBC:

Those who fled reported that they had been unable to bury the dead, and corpses littered the town’s streets, he said.

Boko Haram was now in control of Baga and 16 neighbouring towns after the military retreated, Mr Bukar said.

While he raised fears that some 2,000 had been killed in the raids, other reports put the number in the hundreds.

The attack follows an assault by Boko Haram on a military base in Baga on Saturday.

The AFP reported late Thursday that the terror group also decimated over a dozen towns and villages surrounding Baga:

Boko Haram launched renewed attacks around a captured town in restive northeast Nigeria this week, razing at least 16 towns and villages, a local government and a union official told AFP.

‘They burnt to the ground all the 16 towns and villages including Baga, Dorn-Baga, Mile 4, Mile 3, Kauyen Kuros and Bunduram,’ said Musa Bukar, head of the Kukawa local government in Borno state.

Boko Haram has been terrorizing Nigeria for more than five years. Over the past year, the group has killed more than 10,000 people, according to the Council on Foreign Relations.