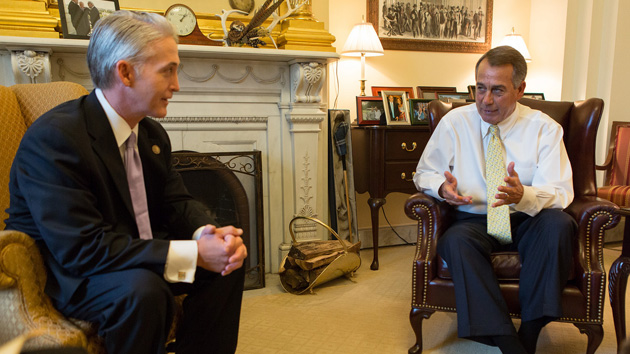 It’s back. Actually, it never left. Benghazi. That is, the GOP’s never-ending Benghazi crusade. Last year, after Rep. Trey Gowdy (R-S.C.) was tapped by House Speaker John Boehner to lead yet another Benghazi probe, he promised to helm an inquiry that would “transcend politics.” But now, eight months into this latest investigation, Democrats on the House Select Committee on Benghazi have hit Gowdy with a sharp charge: that he and his Republican investigators have conducted secret meetings with witnesses without informing their Democratic colleagues on the committee. And they say that some of these interviews have yielded information that undercuts anti-Obama Benghazi allegations promoted by conservatives. In other words, the Democrats are suggesting that Gowdy has been mounting a Benghazi cover-up of his own.

In November, Rep. Elijah Cummings, the senior Democrat on the Benghazi committee, sent Gowdy a private letter noting that though Gowdy had assured him that the committee’s work would be conducted in a bipartisan manner, the five Democratic members of the panel and their staffer had been excluded from at least five witness interviews. Moreover, Cummings said these interviews had produced testimony that failed to corroborate key allegations.

Cummings’ letter pointed out that in September conservative media outlets had promoted the supposed revelation that Hillary Clinton loyalists at the State Department had vetted documents to prevent material damaging to senior State Department officials from being handed to an independent investigation of the Benghazi tragedy. According to Cummings, Gowdy’s Republican staff interviewed the source of this allegation, a former State Department official named Raymond Maxwell, without notifying the Democrats on the committee or inviting them to be part of the interview, and Maxwell identified a person who could confirm his account. In Cummings’ telling, Gowdy’s GOP gumshoes interviewed this person, again without telling the Dems, and this supposed witness did not back up Maxwell’s story. This second witness said he was not aware of an effort to hide or destroy Benghazi-related documents. “I did not discover any of this information from you or your staff but from the witnesses themselves,” Cummings wrote Gowdy.

Cummings accused Gowdy and his staff of essentially smothering information that undermined an allegation aimed at Barack Obama and Hillary Clinton:

Although your staff stated [to the Democrats] that they learned nothing “of note,” in fact they learned that this claim was not substantiated by a key witness. If our goal is the truth and not a preconceived political narrative, these interviews should have been conducted jointly, with both Democrats and Republicans present.

In his letter to Gowdy, Cummings contended this Republican effort to keep the Dems in the dark was part of a pattern. He noted that when he shared his concerns with Gowdy, the chairman informed him that he had spoken to at least three other witnesses without the participation of Democrats and that two of them had provided information that helped debunk other allegations of Benghazi wrongdoing. As a remedy, Cummings proposed in his letter that the committee adopt rules ensuring that all members of the panel are allowed to participate in witness meetings and interviews.

“If our goal is the truth and not a preconceived political narrative, these interviews should have been conducted jointly, with both Democrats and Republicans present,” Cummings wrote.

According to a subsequent letter all five Democratic members on the Benghazi committee sent Gowdy in December, Gowdy rejected Cummings’ demand for Democratic participation in all witness interviews and meetings. In that missive, the Democrats also dissed the committee’s work, noting that it was proceeding at a snail’s pace and was plowing over much of the same territory previously examined by other congressional committees.

Last week, Cummings sent Gowdy another letter reiterating his complaints: “Democrats have repeatedly been excluded from core components of the investigation, and we have been proceeding with no rules to prevent this from occurring in the future. You have…withheld or downplayed information when it undermines the allegations we are investigating.” And Cummings provided another example: The GOP staff interviewed a witness who confirmed there was no illegal transfer of weapons from Libya to Syria (one of the many Benghazi conspiracy theories). Cummings wrote, “Instead of crediting her testimony to help put this previously investigated and debunked allegation to rest, you followed up your private, Republican-only interview of this witness by requesting a broad set of documents from the State Department on this debunked allegation. In addition, your staff has now informed us that they do not intend to use this individual as a factual witness in the Committee’s investigation.”

A spokesman for the Benghazi committee did not respond to a request for comment.

When Rep. Darrell Issa (R-Calif.) was overseeing the main Benghazi investigation in the House as chair of the House government oversight committee, his inquiry became as politicized as it could be, with Issa often acting unilaterally and frequently making claims and charges unsupported by the information the committee had gathered. Meanwhile, other House committees led by Republicans conducted and completed serious investigations—without any internal partisan discord—and discredited the wild theories of the right. But to undo the damage done by Issa and to placate the party’s conservative base, Boehner set up a special committee on Benghazi and appointed Gowdy, a more temperate fellow, to take another stab at it. Yet the newest Benghazi inquiry now appears to be heading down a similar path, as the GOP appears no closer to giving the right’s Benghazi truthers what they seek: proof that Obama or Clinton can be blamed for the horrible murders that happened that night.

UPDATE: After Republicans on the committee learned that reporters had obtained copies of the letters sent by Cummings and the Democrats to Gowdy, Gowdy on Monday evening released a statement noting he was “disappointed by the minority’s decision to release their letters.” His statement also noted:

Chairman Gowdy will talk to Benghazi sources with or without the Democrats present just as they are welcome to talk to sources with or without Republicans present…Further, that the Democrats have released correspondence that attempts to politically characterize sources’ private discussions with the committee without proper context goes to the exact heart of why the Chairman will not require sources to talk to both sides.

Chairman Gowdy has operated the Benghazi Committee in a more-than-fair and fact-based manner, going so far as to allow Democrats absent due to personal matters to participate in Committee hearings via conference call and allowing the minority to claim time not utilized by their absent Members.

The Chairman has worked over the last several months to accommodate the minority with regard to their concerns, including offering a rules package that is much more generous than current standing committee rules and that of rules adopted by previous select committees.

After Gowdy’s statement was issued, a Democratic staffer on the committee countered:

[Gowdy’s] response confirms that he has in the past and will continue to exclude Democrats from discussions with material witnesses.

Chairman Gowdy claims that our letters “politically characterize sources private discussions with the Committee without proper context.” This is incorrect. Democratic members tried to resolve these issues privately for months before we were forced to go public. None of the witnesses told us that they wanted their information to be confidential or private, and we only released the portions of their statements that were necessary to explain our concerns…..

Chairman Gowdy’s rules package does not fix the problems we have identified with excluding Democrats from witness interviews. He has also refused to permit a Committee vote on any rules unless Democrats agree to vote for his language – thereby denying Democrats a public debate and vote on the issue.

This bitter and partisan back-and-forth suggests that this committee could go the full Issa.