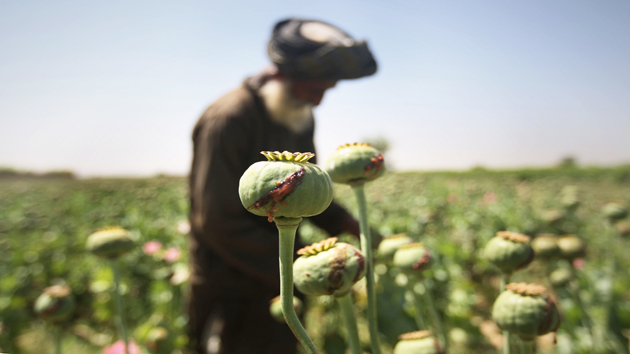 One of the many messes the United States is leaving behind as it formally withdraws from Afghanistan is that it’s more or less a narco state. Despite the United States spending nearly $8 billion to fight the Afghan narcotics trade, the country is producing more opium than ever. It’s unlikely to get better anytime soon: Last month, the Special Inspector General for Afghanistan Reconstruction reported that counternarcotics efforts in Afghanistan “are no longer a top priority.”

The roots of the problem really aren’t that complicated, says Edward Follis. “It really does come down to basic economics.” The Taliban “has decided they would exploit the economic dearth of all these people that can’t provide for themselves, and they take it from there.”

For several years, Follis headed up the Drug Enforcement Administration’s efforts in Afghanistan as the agency’s country attaché, reporting directly to the US ambassador. After chasing drug kingpins in Thailand, Mexico, and Colombia, Follis was sent to Afghanistan in 2006 and was tasked with bringing down the figures behind its narcotics trade. He spent 27 years with the agency. Today he is director of special projects for 5 Stones Intelligence, an intel and investigative firm based in Miami.

Follis recounts his experiences in his memoir (with co-author Douglas Century), The Dark Art: My Undercover Life in Global Narco-Terrorism, which was published last year. In the book, Follis recounts making drug deals with Mexican cartels, setting up phony gun deals, working deep undercover to help take down the notorious Shan United Army in Burma, and hanging out with a major Lebanese drug trafficker at Disneyland. In Afghanistan, he befriended accused Taliban financier Haji Juma Khan. While some American officials wanted to take out Khan in a drone strike, Follis claims that he convincingly argued that he should be brought in alive. Khan is now awaiting trial in New York City on charges of conspiring to distribute narcotics to support a terrorist organization.

As he looks back on his time in Afghanistan, Follis calls the Afghan government’s drug eradication efforts “a joke.” But the real issue, he says, is that for many Afghans, cultivating poppies or producing opium is by far the best way to feed their families. Opium sells for a high price and is relatively easy to store. Not that being a poppy farmer is always a good deal: Follis says drug traffickers often treat the farmers like sharecroppers, giving them seeds and equipment and then coming back to collect the product during the harvest season. “When I was in Afghanistan, I realized very quickly it was a nation of indentured servants,” he says. “While we were obsessing on parliamentary democracy, the common folk, they’re trying to put food on the table every day.”

In the mid-1980s, Afghanistan produced about 20 percent of the world’s opium. Today it produces more than 80 percent. There was a drop in production when the Taliban took over in the mid-1990s. While the Islamists allowed poppy production for a few years, in 2000, they issued a decree banning the practice, causing a drastic drop in production. Follis says reports that the Taliban was sitting on a large amount of opium on the eve of the Afghan War in 2001 are accurate: “I know that before [the United States and its allies] entered from the north into Kabul, there were 30 tons of opium placed in warehouses.”

As the United States and the new Afghan government took on the Taliban, opium production began to skyrocket. Proceeds from drug trafficking have now become a major income source for the Taliban. Follis predicts we’ll see more of these alliances between militants and organized crime; he cites ISIS as a prime example. “These transnational traffickers have started to have sex with the terrorists,” he says, “and they got an unholy marriage.”

The CIA, Follis says, “keep[s] us safe in many ways, but rule of law is different than national security priorities.”

Battling Afghanistan’s drug kingpins was a particular challenge, Follis recalls. There were serious security issues: Agents could not always travel freely or safely and informants had little or no protection. And the trade was aided and abetted at the top levels of government, he says. Former Afghan President Hamid Karzai’s late half-brother, Ahmed Wali Karzai, was rumored to be deeply involved in the heroin trade. Follis bolsters this claim: “Without equivocation, Wali was highly implicated, especially in western Afghanistan.” Further complicating things, Wali was rumored to be working with the Central Intelligence Agency.

Follis says the DEA and CIA often bumped heads in Afghanistan. “You take a DEA agent and paratroop him in anywhere in the world, in short order he’ll meet with local cops, develop information, informants, bring people to justice,” Follis says. “The people with that agency you just mentioned, their mandate is different than the DEA mandate. It’s not dichotomous, but it is different, in terms of ‘We’ll do this to advance these causes.’ They do incredible work and keep us safe in many ways, but rule of law is different than national security priorities.”

While hinting that the CIA sometimes turned a blind eye to the Afghan drug trade, Follis won’t get into specifics. In his book, he writes, “Almost everywhere in the world I worked, I had static with the CIA. We’re often working the same terrain, but with different legal and moral parameters…They exist completely in the shadows.” Follis includes this footnote about Haji Juma Khan: “In 2001, after the Coalition invasion of Afghanistan, Haji Juma Khan had been briefly detained by US authorities, but—for reasons that remain somewhat mysterious even today—he was almost immediately released.” In 2010, the New York Times reported that Khan had a close working relationship with the CIA and DEA before his eventual arrest. (The CIA declined to comment for this article.)

To Follis, any solution to Afghanistan’s opium problem must be comprehensive: Reduce drug use, especially in the United States and Europe; provide stability so Afghan farmers can survive without poppies; and dismantle the traffickers’ organizations by rooting out corrupt officials. It all comes back to economics: “If people don’t stick it in their veins, snort it, or smoke it, there wouldn’t be a market. It’s a business, and that’s what it comes down to.”

But Follis is not optimistic about Afghanistan’s future. “When we pull out completely,” he says, “you better know without equivocation that the Taliban will be marching on Kabul.”