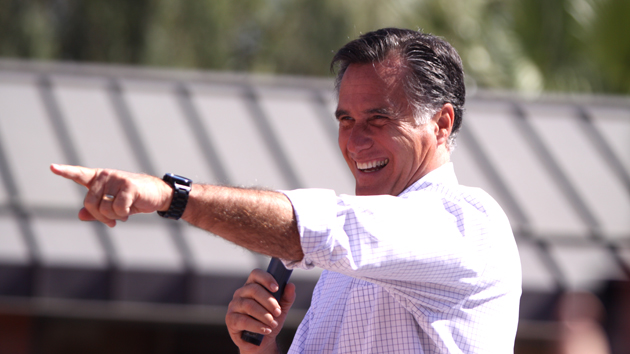 Last Friday, Mitt Romney confirmed that he’s considering running for president once more in 2016. On Monday, the Washington Post reported that Romney is quickly rebuilding his campaign network for an “almost certain” run. Here’s a look at the evolution of Romney’s statements regarding a possible third presidential run:

November 7, 2012: Romney concedes the election to President Obama. “I so wish that I had been able to fulfill your hopes to lead the country in a different direction,” he said to those gathered in his Boston headquarters.  He was reportedly so shocked by the loss that he had not prepared a concession speech.

March 3, 2013: In his first interview since losing the election, Romney says, “It kills me not to be there, not to be in the White House doing what needs to be done.” On running in 2016: “I’m not doing it again,” he declares.

March 23, 2014: On CBS’s Face the Nation, he again indicates he has no interest in another run: “We have a very strong field of leaders who could become our nominee…I wholly anticipate that I’ll be supporting one of them very vigorously.”

June 15, 2014: On Meet the Press, David Gregory asks Romney about speculation within political circles of a “Draft Romney” movement. “I’m not running and talk of the draft is kind of silly,” he says.

August 26, 2014: In a radio interview, Romney is slightly less certain about not running, suggesting there might be a shift in his thinking. “You know, circumstances can change, but I’m just not going to let my head go there,” he remarks.

September 30, 2014: The New York Times Magazine runs a profile of Romney that is heavy on 2016 talk. “We’ve got a lot of people looking at the race,” he says. “We’ll see what happens.” A lot of people? He did not specify what that meant.

October 7, 2014: With rumors flying that he would run if Jeb Bush, another establishment moderate, declines to enter the race, Romney doubles down in a Bloomberg Politics interview on his previous ain’t-gonna-do-it remarks: “I’m not running, I’m not planning on running, and I’ve got nothing new on that story.”

January 9: At a private meeting with former donors in Manhattan, Romney shows more leg. “Everybody in here can go tell your friends that I’m considering a run,” he says. And that one statement was enough to trigger a frenzy among the politerati.

In case you forgot, here’s the secretly recorded video that was the most talked-about news of Romney’s 2012 campaign: