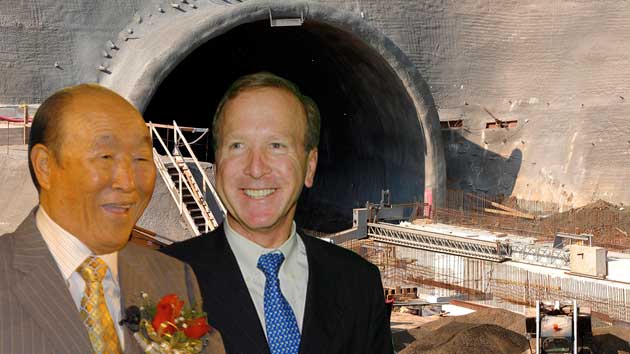 The Rev. Sun Myung Moon had a grand idea: the World Peace King Tunnel. It would be 53 miles long, cost $400 billion, and stretch underneath the Bering Sea between Alaska and Russia. It would take three years to build. When completed, it would link up with the eight-lane International Peace Highway that Moon had also proposed. That road would be bordered on both sides by one kilometer of land that would not belong to any nation. When both projects were completed, traffic could pass unimpeded from the Cape of Good Hope to New York City. And if travelers wanted to get married in the tunnel, there’d be places to do that, too.

A multinational construction project that had no funding stream or historical precedent and that was proposed by a self-described messiah who believed he had posthumously healed Adolf Hitler might strike some people as a bit ambitious. But in 2005, when Moon, the late South Korean-born conservative media mogul and founder of the Unification Church, embarked on a world tour to promote his idea, he brought along an unusual companion—Neil Bush, the younger brother of President George W. Bush and Florida Gov. Jeb Bush.

As Jeb Bush now aims to become the third member of his family to be elected president, he’ll have to navigate the legacy not just of his polarizing older brother, but also that of his younger brother, whose business exploits have dogged—if not tainted—the family for decades. In 1988, Neil Bush was embroiled in the savings and loan scandal after his business went belly-up and cost US taxpayers $1 billion.

His recent investments have dovetailed neatly with his brothers’ work. In 1999, Neil, backed by “junk bond king” Michael Milken and a Saudi prince, pushed a for-profit education tech venture called Ignite! Learning that sold “curriculum on wheels” consoles to schools. Much of the money for those purchases would come from W.’s No Child Left Behind law, which mandated a new testing regime in public schools. (Neil has said his focus on education was inspired by his own dyslexia.) When his mother, Barbara, wrote a check to assist students who had been displaced by Hurricane Katrina, she stipulated that the money be spent on her son’s curriculum on wheels, according to the Houston Chronicle. Neil also got a big hand from his friend, the Rev. Moon. The Washington Times Foundation, which was at the time operated by Moon’s Unification Church, spent $1 million to promote Ignite products in Northern Virginia.

None of Neil Bush’s business exploits were as pie-in-the-sky as Moon’s extreme transportation makeover. Moon proposed his idea in September 2005 as a means of uniting the world and confronting the demonic forces that supposedly controlled its bodies of water. “For thousands of years, Satan used the Bering Strait to separate East and West, North and South, as well as North America and Russia geographically,” he explained at the time.

The Bering Strait is frozen eight months a year; temperatures can drop to more than 80 degrees below freezing. The region is basically empty. And the US and Russia haven’t been on great terms for a few dozen decades. But Moon was undeterred. “Some may doubt such a project can be completed,” he said in a 2005 speech to the Universal Peace Federation in New York. “But where there is a will, there is always a way—especially if it is the will of God. The science and technology of the 21st century render it possible to construct a tunnel under the Bering Strait.” This wasn’t Moon’s first proposal for a world-historical engineering venture. In 1981, he’d convened a group of scientists to unveil a plan for a bridge that would connect Japan and China.

Neil Bush, an investor with no political ambitions, joined Moon on several stops on his yearlong tunnel-promoting tour. He traveled with him to Manila, where they visited with President Gloria Macapagal-Arroyo at the Malacañang Palace, and he followed along to Taipei, where he watched Moon make his pitch to an audience that included the vice president of the Republic of China. In an email to Mother Jones, Neil Bush said he did not support the tunnel plan but had traveled with Moon because he supported “efforts by faith leaders to call their flock into service to others.” Moon’s proposal never picked up much political momentum, though, and he died in 2012.

Evidently, Neil Bush remained a fan of Moon. “As controversial as Rev. Moon was in the United States, I got to know him as a man whose heart was focused on bringing together people of different faiths to bridge divides,” he told the Washington Times when Moon died. “His call on people of faith to serve others is an important legacy.”