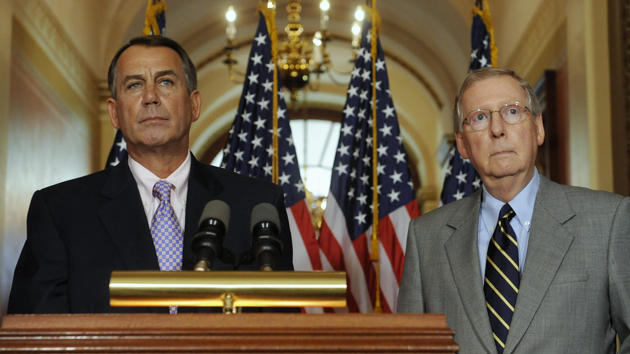 On Thursday, House Republicans will vote on an anti-Obamacare bill that could toss up to 1.5 million Americans off their employer-sponsored health plans. To make the case that this is a good idea, top GOPers are misrepresenting what the legislation would do. They claim the measure would help prevent companies from reducing worker hours in order to cut employees’ health insurance benefits. Yet the legislation would likely encourage businesses to decrease hours so the firms could avoid providing health insurance to workers. “While political leaders often stretch the truth to make their case, they usually don’t claim the opposite of the truth,” Robert Greenstein, the president of the left-leaning Center on Budget and Policy Priorities (CBPP), noted Wednesday. “That, however, is essentially what Republican congressional leaders are doing.”

The bill House Republicans introduced Wednesday would change the way the Affordable Care Act defines full-time work and, thus, who is eligible for employer-sponsored health care. Currently, the ACA requires companies with 50 or more employees to provide affordable health coverage to 95 percent of their full-time workers or pay a penalty. This measure, called the employer mandate, begins to go into effect this year. Under the 2010 health care law, full-time work is defined as 30 or more hours per week. The GOP bill would change the law’s definition of full time to 40 hours per week.

Such a move would obviously lead to the loss of employer-sponsored health insurance for many people who work between 30 and 39 hours per week. But there’s the bill would have another impact too: It would give employers a powerful incentive to cut the hours of Americans who work 40-plus hours per week to escape the obligation to provide them health insurance. And health care policy experts note that it is more likely that a firm would slice the hours of a 40-hours-per-week worker than an employee who toils 30 hours a week. (More on that below.) Changing the full-time threshold to 40 hours would put some 1.5 million Americans at risk of having their hours docked and their insurance yanked, according to a recent report by the Congressional Budget Office.

As I reported Monday, here’s why companies would be more likely to reduce workers’ hours under the GOP bill’s 40-hour threshold than under the current 30-hour per week cutoff:

The 30-hour threshold was intended to discourage companies from cutting workers’ hours. Nearly half of Americans work 40 hours a week or more—meaning that, under current law, employers would have to cut those workers’ hours by more than 25 percent to avoid buying them health insurance. But if the threshold were 40 hours, as the GOP envisions, many employers would only have to cut workweeks a tiny bit to avoid buying health insurance for their employees. “Raising the threshold to 40 hours would place more than five times as many workers at risk of having their hours reduced,” Paul van de Water, a senior fellow at the [CBPP], wrote in 2013.

A flock of prominent conservatives—including political analyst Yuval Levin and columnist Ramesh Ponnuru—have also chimed in against the 40-hour bill.

On Wednesday, President Obama vowed to veto the law if the Senate approves it. But that doesn’t mean the bill won’t become law. It’s possible that Republicans will attach the measure to a must-pass spending bill this year that would be extremely difficult for Obama to oppose.