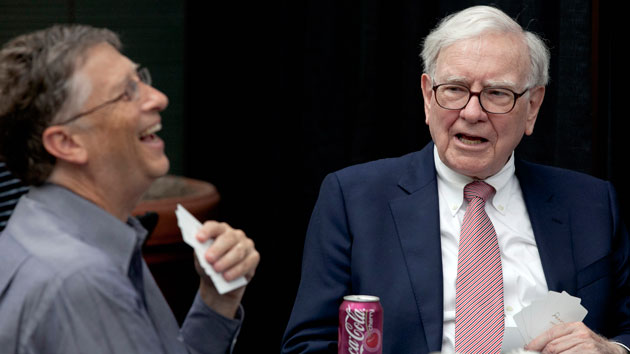 As everyone from Ted Turner to Drake has said, the hardest part of getting rich is making the first million. The rest just comes naturally.

The fact that wealth begets more wealth was illustrated once again last year by Bill Gates and Warren Buffett, currently the two richest people on Earth. According to Bloomberg, the pair finished 2014 a combined $21.1 billion richer than when the year began. (Gates‘ fortune rose $8.1 billion to a total of $86.6 billion. Buffett‘s rose $13 billion; he’s now worth $73.8 billion.)

Gates and Buffett are aware of their privilege. They have both pushed for higher taxes on the wealthy. They have also poured billions of their own money into the Bill & Melinda Gates Foundation, one of the world’s largest funders of charitable causes like infectious disease research, poverty reduction, and (more controversially) education reform.

The Gates Foundation would be a fitting destination for Gates’ and Buffett’s new wealth, but it’s not the only place they could spend last year’s earnings. Here’s a list of some of the things that money could buy:

Humanitarian assistance for the world’s war-ravaged people. Earlier this month, citing “an unprecedented level of crisis around the world,” the United Nations asked member states for $16.4 billion to help at least 57.5 million people who “have experienced unimaginable suffering” in Afghanistan, the Palestinian territories, Burma, Yemen, the Democratic Republic of the Congo, Ukraine, Syria, Sudan, South Sudan, the Central African Republic, Somalia, Burkina Faso, the Gambia, Chad, Djibouti, Mali, Mauritania, Niger, Nigeria, Senegal, and Iraq. With $21 billion, Gates and Buffett could meet that request and still have nearly enough money left over to cover the US response to Ebola.

Food for the year for 3.1 million American families. As of last month, an American family with a toddler and a small child needs at least $566.70 each month in order to eat nutritious food, according to the US Department of Agriculture. But this minimum threshold is out of reach for many families. In 2013, 17.5 million households struggled at some point to get enough food, according to the USDA. Extra help would be especially useful given that Congress cut food stamps by $8.7 billion in February.

College educations for 278,000 students. With tuition, fees, room, and board averaging $18,943 per year, attending a state school for four years is out of reach for many Americans. For students who can’t afford college—or who are paying for it by taking on massive debt—a lot of money here could go a long, long way.

The Chesapeake Bay, restored. The Chesapeake Bay is a major source of tourism and fishing revenue for Maryland and Virginia, but agricultural runoff has turned large swathes of it into a marine dead zone. State and local governments have been working to restore the bay. A recent estimate put the cost of the project at $14.4 billion over 15 years. At that price, Gates’ and Buffett’s 2014 earnings could cover the restoration cost—with enough money left over to match the combined pledges from the United States, Japan, the United Kingdom, and Germany to the United Nations’ Green Climate Fund, a pot of money intended to help poor countries deal with global warming.

The means to save the Amazon. In 2009, then-Brazilian President Luiz Inácio Lula da Silva asked the governments of the world to put $21 billion into a fund to manage protected areas of the Amazon and restore other, deforested areas. Five years later, the fund has raised less than $1 billion, mostly from the Norwegian government.

Five record-setting midterm elections. A flood of dark money made this year’s midterms the most expensive in history. With their 2014 earnings, Gates and Buffett could match all sides’ political spending more than five times over.

An aircraft carrier. The US Navy is currently replacing it’s Nimitz-class carriers—already the largest warships in the world—with something larger and more technologically advanced: the Gerald R. Ford class carriers. At just $12.9 billion apiece, Gates and Buffett could buy one and have enough money left over to procure a pair of high-tech destroyers that are nearly invisible to radar.