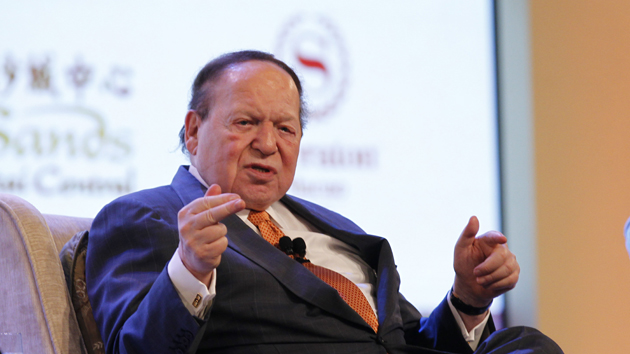 Casino magnate and conservative megadonor Sheldon Adelson has been on a full-scale crusade against internet gambling. An advocacy group he launched and helps to bankroll is currently at the vanguard of a lobbying effort to pass a federal ban on online wagering. The billionaire, who says he’ll spend “whatever it takes” to support the ban, claims he opposes internet gambling on “moral” grounds, because it preys on the most vulnerable members of society. What he doesn’t say is that for years his company, Las Vegas Sands Corp., tested the waters on getting into this business for itself.

Adelson’s pet cause got a boost in Congress earlier this month when Sen. Lindsey Graham (R-S.C.) and Rep. Jason Chaffetz (R-Utah) introduced (for the second time) the Restoration of America’s Wire Act. The bill aims to strengthen the Federal Wire Act of 1961, which prohibited phone and wire-based wagering, by applying it to internet gambling—effectively banning the practice. The Coalition to Stop Internet Gambling, an Adelson-launched group whose chairs include former New York Gov. George Pataki (R) and former San Francisco Mayor Willie Brown (D), is lobbying heavily for the bill and running ads online and in print in support of the cause. On its website, the group casts online gambling as an out-of-control phenomenon that “crosses the line of responsible gaming by bringing gambling into our living rooms and onto our smartphones” by “targeting the young, the poor, and the elderly where they live.”

In 2013, Adelson said that he was compelled by his “moral standard” to launch the coalition. “I am the largest company by far in the industry and I am willing to speak out,” he said. “I don’t see any compelling reason for the government to allow people to gamble on the internet.”

But for Adelson, there’s more at stake in this fight than his moral beliefs. His chief Las Vegas rivals, Caesars Entertainment and MGM Grand, have online gambling operations, while his Las Vegas Sands does not. But not for lack of trying. Sands Corporation, of which Adelson is president and CEO, was actively exploring online gambling from at least 2001 to 2007, when the casino mogul himself declared, “If the market sees a way into expanding in electronic gaming, we’ll be in it.”

Sands’ 2001-02 filings with the Securities and Exchanges Commission stated that “the company is actively pursuing the possibility of developing and operating an Internet gaming site and is currently exploring other business opportunities for expansion.” Its SEC filings the following year confirmed that “the Company entered into a joint venture agreement to assess the feasibility of developing and operating an Internet gaming site…the Company is committed to contribute approximately $1.0 million.” Through the joint venture, Sands would receive 50 to 80 percent of the profits, though it’s unknown how much the company expected to make.

That agreement moved forward in 2003, when a Sands subsidiary was granted a license from the government of Alderney, a tiny, windswept British island in the English Channel, whose permissive regulatory rules have made it very hospitable to online gambling. By the end of 2003, Sands had spent $1.3 million on its online gambling venture, but it ended in 2005, when the Sands subsidiary relinquished its licenses in 2005. Sands spokesman and Adelson right-hand man Andy Abboud would later dismiss the venture as a “small exploratory effort.”

However, Adelson’s company kept exploring. It reentered the online gaming market in 2006, when it partnered with US-based Cantor Gaming to “launch an online casino and poker site initially aimed at serving the United Kingdom market.” Bill Weidner, then Sands’ president and COO, said, “As the Internet gaming landscape continues to evolve this effort will put us in a strong position to evaluate and react to other potential opportunities.”

It’s unclear what became of that second effort, but since then Adelson’s company abandoned its plans to enter the online gambling world—and Adelson has become a strident foe of online gaming.

A Sands executive tells Mother Jones that “nothing ever materialized really” during the company’s exploratory efforts, and cast the online gambling push as an attempt to advance the Sands brand. He said that Adelson was not particularly involved in the effort and that his advocacy has only developed recently, as the issue has moved to the “forefront of the industry.” The executive confirmed that Sands has no plans to explore online gambling in the future.

Meanwhile, Adelson’s competitors have found that online gambling, while not a cash cow quite yet, is still relatively lucrative. So far, three states have legalized it. Online gambling accounted for $140 million in revenues in 2014. MGM’s Borgata—based in New Jersey, which has legalized most online gambling—posted online revenues of nearly $3.5 million in August 2014 alone.

Though Sands’ executives, particularly Abboud, are confident Congress will pass a ban, Adelson’s vocal advocacy has provoked the emergence of a strong anti-ban coalition, which is just as partisan as the pro-ban one. Congressional Democrats and the Democratic Governors Association have joined with conservatives and libertarians, including anti-tax activist Grover Norquist and New Jersey Gov. Chris Christie, to argue that states should decide the issue for themselves. A letter that Norquist cosigned with other conservative activists claims that passing a ban would “become yet another instance where the federal government expands its encroachment into the states’ purview.” And Caesars and MGM have launched their own anti-ban advocacy group, the Coalition for Consumer and Online Protection, to directly challenge Adelson’s Coalition to Stop Internet Gambling.

The online gambling fight is playing out just as the 2016 presidential election gets underway. For some 2016 hopefuls, fighting for Adelson on this issue now could mean crucial financial support down the road. Adelson spent close to $100 million supporting Republicans in the 2012 elections, and kept a moribund Newt Gingrich campaign afloat for months. Lindsey Graham, who’s spearheading the effort to pass the online gambling ban in the Senate, is already benefiting from Adelson’s largesse. Politico reported this week that the casino mogul signed up to co-chair a fundraiser for Graham’s Security Through Strength PAC, which is helping the senator “test the waters” for a potential presidential run. As in 2012, backing Adelson’s pet causes is already proving a winning bet for Republicans.