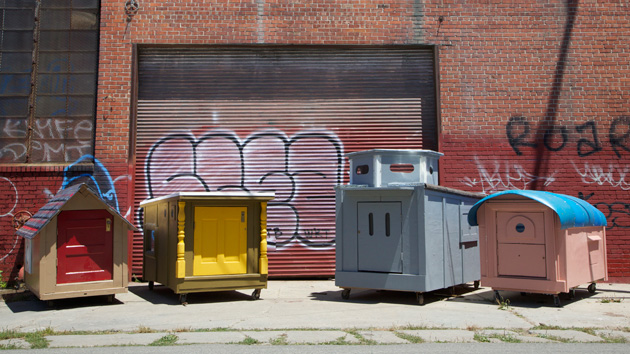 In November 2013, June lived in a makeshift encampment of tarps and cardboard, squeezed between a road and a chain link fence in West Oakland, California. “It can happen to anybody, man,” he says of life on the street. “Up today, down tomorrow. That’s the way it goes.”

Come last winter, June upgraded from his ramshackle encampment to a pink wooden house with a tan door and shiny roof. The new house, which is just long enough for him to lie down inside, cost only $30 to build.

It’s one of about 25 colorful homes artist Greg Kloehn has fashioned from the massive amounts of garbage dumped illegally in Oakland—a city where a minimum wage worker would have to put in 150-hour weeks to afford a fair market, two-bedroom apartment. He uses whatever materials he happens upon—pallets, bed boards, sheets of plastic, dryer doors. One home has an umbrella and grill propped on its miniature front porch. Wheels accommodate the “nomadic life” of people living on the street, who relocate frequently to avoid cops and city cleanup crews. As Kloehn jokes, he builds “illegal homes out of illegal garbage.”

Similar projects to put tiny roofs over people’s heads have popped up in a handful of US cities. This new approach to homelessness offers the physical protection of a traditional shelter without sacrificing the autonomy of life on the street. And it’s undoubtedly time for some new options: An estimated 578,424 Americans had no home in 2014. While twenty-eight percent of renter households live below the poverty line, the typical new apartment in 2012 was unaffordable to anyone making under $43,000. 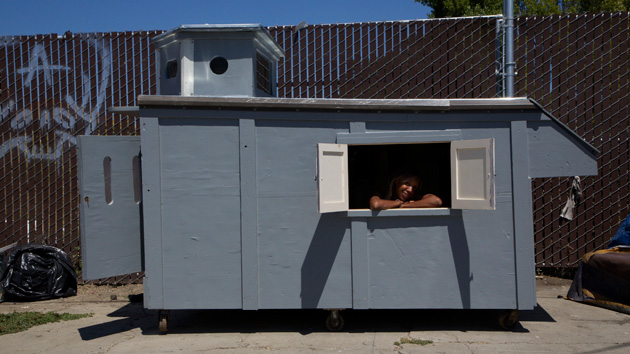 Kloehn’s tiny houses have appeared on the streets of Oakland. Brian Reynolds

Betty Ybarra, 49, moved into her tiny house in Madison, Wisconsin in December 2013. A mother and grandmother, Ybarra had been living in a tent after a “distasteful” former relationship led to homelessness. Her new mini-house, which she shares with her friend, Chris, is green with white trimming, shutters, and a window box. It was built with $5,000 and lots of volunteer labor, including hers and Chris’. At 99 square feet, it’s bigger than June’s but just five percent the size of a typical new US home.

Ybarra’s move-in marked the first step of a plan by OM Build, a subsidiary of Occupy Madison, to create living spaces for the homeless men and women who joined its economic justice protests in 2011 and 2012. OM Build’s proposal to place nine mini-houses on the site of a former auto repair shop was greenlighted by a unanimous city council vote last May, despite a petition filed by neighbors. Ybarra’s house moved permanently to the lot in November, where it stands alongside two other completed houses and shared bathroom and shower facilities.

Other optimistically named communities include Opportunity Village in Eugene, OR, filled with 29 colorful tiny homes, and Second Wind Cottages near Ithaca, NY, where six men inhabit 16×20′ cottages as a transitional step between homelessness and permanent housing. Quixote Village opened on Christmas Eve two years ago in Olympia, WA, for 30 former inhabitants of a tent city. And the planned 27-acre Community First! Village in Austin will house 200 formerly homeless men and women in tiny buildings and repurposed RVs—that’s almost 20 percent of Austin’s chronically homeless population. 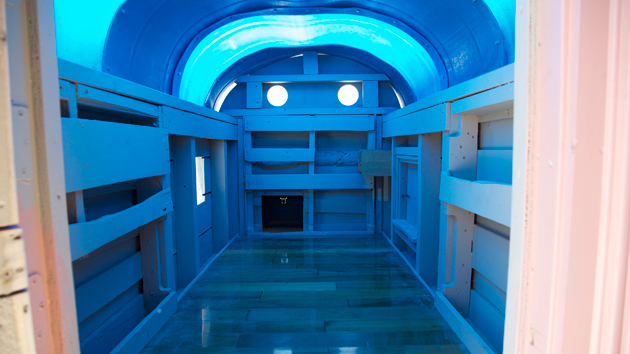 The inside of one of Kloehn’s tiny houses. Brian Reynolds

Tiny-house communities follow the “Housing First” philosophy, which the National Interagency Council on Homelessness considers “the most effective approach to ending chronic homelessness.” Housing First originated in 1992 with a NYC nonprofit called Pathways to Housing, and is based on the premise that vulnerable people can better address the root causes of their homelessness and access needed services once they escape chaotic street life for a house of their own. As the National Alliance to End Homelessness explains, “homelessness causes illnesses and makes existing mental and physical illnesses worse.”

Traditional shelters are one way to get people off the streets, but they often fill up or require clients to arrive and leave by specific times and meet other restrictions. June says without his mini-house, he would have nowhere to store his belongings while he leaves town to work. One 52-year-old woman told the US Law Center on Homelessness and Poverty she prefers her tent to a shelter where “I have to be told what time to go to bed, what I can watch on TV, when I can eat, what time to go to the bathroom. Are you kidding me? I’d rather feel normal.”

There’s an even more immediate problem these small houses could help solve. Many homeless people face jail time and fines as US cities increasingly prohibit acts like panhandling and sleeping outside. “It’s essentially illegal to be homeless in Madison,” says OM Build Board Member Bruce Wallbaum. “You can get a ticket for sleeping anywhere in the city.” At least 33 municipalities banned the distribution of free food between January 2013 and April 2014. It’s gotten so bad, the UN Human Rights Committee condemned US homelessness criminalization last March, saying it “raises concerns of discrimination and cruel, inhuman, or degrading treatment.” 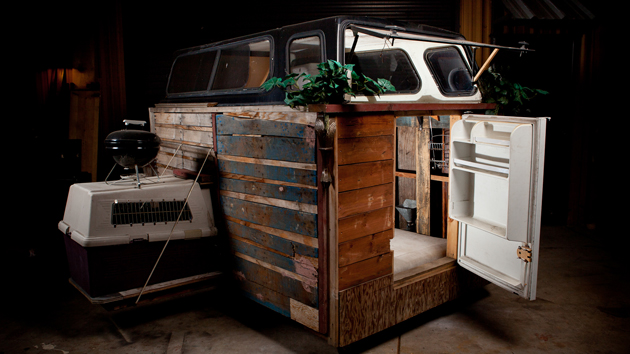 Housing-first approaches benefit more than just those receiving homes. As the Central Florida Commission on Homelessness calculated, each person left chronically homeless costs their community $31,000 annually in ER visits, jail time, and other side effects of life on the street. Many of these costs could be eliminated with a $10,000 per-person investment in housing and services. Tiny housing could make this option even cheaper.

But homeless advocates say it’s too soon to tell whether tiny-house communities, many of which are still in the planning stages, could become a large scale, cost-cutting solution. The Department of Housing and Urban Development (HUD) is keeping an eye on the trend, but “we haven’t taken an official position,” says Ann Marie Oliva, Director of the Office of Special Needs Assistance Programs. “We don’t want to stifle innovation at all,” she says, but her department is wary of the new challenges tiny houses could present.

For instance, Kloehn crafts and gives away shelters without a legal place for inhabitants to station them. During my visit, a city crew begins dismantling a sprawling cardboard encampment down the road. Kloehn convinces them to hold off while he finds and warns its owner, a man named George who is slated to receive a mini-home that day. But less than an hour after their friendly exchange, he spots the same crew loading up an unattended (but occupied) house Kloehn had built and given away months earlier.

“It kind of pisses me off!” he says after rescuing the home. “It’s like, you see us down here, you talked with us!” He pauses, considering. “I mean, maybe they’re just doing their rounds. He just wants his pictures so he can go show his supervisors, ‘Hey look, the area’s clean!'”

The city is undoubtedly under pressure to keep the streets cleared. “This is getting out of control with the homeless,” reads one of many complaints about Kloehn on the Oakland Public Works website. “…What is crazy that a Nieghbor [sic] is building these houses for them.” Another user suggests the commenter “Call OPD EVERY DAY until they run them out of there. This is criminal activity.” 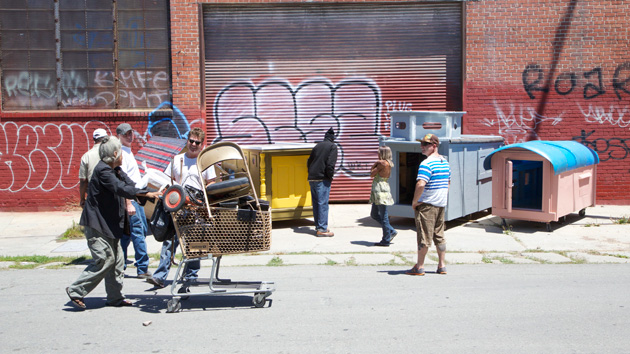 When I describe the mini-houses to Kristine Shaff, Oakland Public Works Public Information Officer, she says, “Whether they’re lovely, artistic, craftsman-built, and unique…and whether they’re allowed by law to exist so people can stay the night in them, are two different things.” It’s common knowledge, she adds, that camping on city streets, parks, and plazas is banned.

Kloehn acknowledges it would be better “if someone just had an old abandoned lot—even the city—and they could park all the homes there. And then on that, you put a couple port-a-potties and a place to take a shower,” like the plan in Madison. But he never intended to solve homelessness—he just saw people living in leaky, immobile, unprotected shelters and wanted to provide something a bit more substantial.

“If you go to Starbucks and you see a homeless person walk in, a lot of times they kick them out before they even get in. Even if they’ve got money to buy a coffee!”

“They are so illegal and shunned,” says Kloehn of his homeless neighbors. “They just want to have a little bit of dignity. If you go to Starbucks and you see a homeless person walk in, a lot of times they kick them out before they even get in. Even if they’ve got money to buy a coffee!”

“Lack of housing—and housing affordability—really is the driver in homelessness,” says National Alliance to End Homelessness’ CEO Nan Roman. “Since the solution is housing, any innovation is important, and small housing that can be produced at lower cost is one such innovation. However, if it’s not sufficient, not properly zoned, doesn’t have infrastructure like water and roads, if it doesn’t have good quality services, if the government and ownership is not clear…those things can cause problems. The devil is in the details.”

June and Ybarra’s living quarters are tight, but both are emphatic that their mini-homes have made a difference in their lives. Unlike tents, cardboard encampments, and traditional shelters, tiny houses offer security and a renewed sense of dignity. Ybarra recalls how a visiting alderman thanked her for inviting her into her new home. She says, “I can’t put it into words. She looked right at me and said that. I was very flattered.”