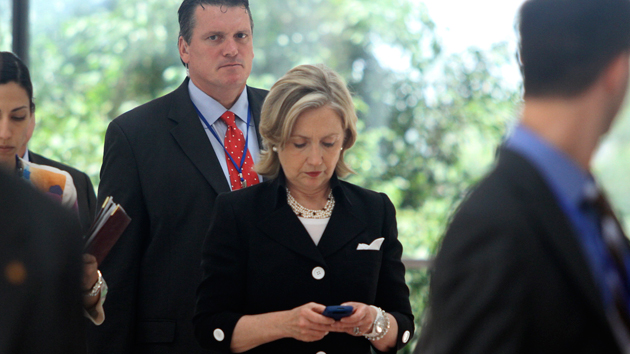 The New York Times set off a Clinton bomb when it revealed Monday night that Hillary Clinton, when she was secretary of state, used a personal email account instead of a government account for all of her official business. The newspaper reported that Clinton had turned over 55,000 pages of emails to the State Department—yet only after her aides had vetted the massive collection of emails and decided which ones to give to the agency. And it noted that the probable 2016 candidate “may have violated federal requirements that officials’ correspondence be retained as part of the agency’s record.”

Ka-boom. Another round in the Hillary wars. Her Republican antagonists pointed to this as a sign of Clinton antipathy toward transparency. The Washington Post’s Chris Cillizza quickly penned a piece headlined, “Hillary Clinton’s Private Email Address at State Reinforces Everything People Don’t Like About Her.” Clintonistas rushed to her defense. Correct the Record, a pro-Clinton outfit, zapped out talking points: She had followed State Department precedent with regard to the use of email; she knew her emails sent to State Department officials at their official accounts would be retained; she has fully cooperated with State Department requests to produce her emails; and Colin Powell used his personal email account when he was secretary of state. Some pro-Clinton observers pointed out that the federal regulation instructing government employees to “not generally use personal email accounts to conduct official agency business” was not issued until September 2013, months after Clinton had left Foggy Bottom.

But according to the National Archives and Records Administration, there was a regulation in place governing Clinton’s use of personal email for official business while she was secretary of state. And it seems she did not fully abide by this. In a statement issued today, the National Archives notes that it has “reached out to the State Department to ensure that all federal records are properly identified and managed.” And the statement says:

Since 2009, NARA’s regulations have stated that “Agencies that allow employees to send and receive official electronic mail messages using a system not operated by the agency must ensure that Federal records sent or received on such systems are preserved in the appropriate agency recordkeeping system.”

This rule is clear: If Clinton used personal email to conduct official business—which apparently did not violate any federal rules at the time—all of those emails had to be collected and preserved within the State Department’s recordkeeping system. That makes sense: The whole point of preserving official records of government business is to have this material controlled by the government, not by the individual official or employee. Yet in this case, Clinton and her aides apparently did not preserve all her emails within the system.

The State Department has had to rely upon Clinton and her aides to ensure it now has a complete record of her emails. Last October, the department asked secretaries of state going back to Madeleine Albright if any possessed material that should be within the agency’s records system. Within weeks, Clinton handed in those 55,000 pages of email. Her team cites this as an act of transparency on her part. But one need not be a conspiracy theorist to note that there’s no telling if she and her aides hung on to certain emails they did not want to share. In law enforcement parlance, the chain of custody has been tainted.

Whether or not it was permissible for Clinton to use her personal account to conduct official business as secretary of state, it was probably not a smart move for her to do so—and it also was bad staff work to allow her to evade (partly) the requirement that her emails be maintained within the State Department’s system. The rap on the Clintons, fair or not, is that they act outside the rules, that they are excessively secretive, and, in the case of Hillary Clinton, that she has not always surrounded herself with savvy staffers who can prevent problems like this one. Perhaps Clinton was not aware of the rule regarding the preservation of her emails, and maybe the record keepers at Foggy Bottom were slow at the switch. But certainly someone in her circle ought to have been on top of this.

This matter, like anything Hillary-related, immediately has become part of the ongoing life-and-death political slugfest between the Clintons and their detractors. To her critics, it is more proof she is diabolical. To her champions, it is another sign the media and her opponents will trump up anything to thwart her. But this is the sort of problem that a person who was (possibly) running for president the day she entered the State Department should have been able to avoid.