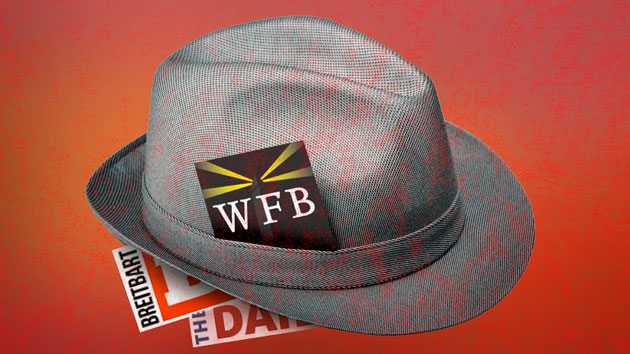 On July 21, 2013, Sen. Rand Paul reluctantly accepted the resignation of Jack Hunter, a.k.a. the “Southern Avenger.” Hunter had been one of the senator’s closest aides and had coauthored the Kentucky Republican’s 2011 book, The Tea Party Goes to Washington. But before that, a reporter revealed, he’d been a pro-secessionist shock jock who donned a Confederate-flag wrestling mask and annually toasted Abraham Lincoln’s assassin. Why, Paul was asked a few weeks later by a National Public Radio host, would he have worked with someone like Hunter? “Many of the things he wrote were stupid and I don’t agree with,” the presidential contender answered. “I do think, though, that he was unfairly treated by the media.”

The scoop that put Paul on the spot “and led him to blame the media” didn’t come from the New York Times, a Kentucky paper, or even a Democratic opposition researcher. Credit belonged to Alana Goodman, a reporter at the Washington Free Beacon, an avowedly conservative website that had launched just a year and a half earlier.

In its short history, the Free Beacon‘s tiny staff of fewer than two dozen journalists has pulled off an almost unprecedented feat: Amid a conservative movement that has often evinced something between disinterest and disdain for the work of investigative reporters, it has built genuine muckraking success.

In May 2014, reporter Lachlan Markay obtained a secret list of donors’ pledges to the progressive Democracy Alliance—something akin to getting the Koch brothers’ political ledgers. A month later, Goodman posted previously unreleased audio of Hillary Clinton candidly discussing her vigorous defense, as a young court-appointed attorney, of an accused child rapist. In October, she uncovered Arkansas Sen. Mark Pryor’s college thesis, in which he described school desegregation as a “figurative invasion.” Two weeks later, the Democrat lost his reelection race. Like the Southern Avenger expose, each of these stories was picked up by the mainstream media, a rare accomplishment for a conservative outlet. Taken together, the stories suggest that the Beacon may be poised to break out of the agitprop model of much conservative media to become a real player in hardcore news reporting.

The Beacon was initially inspired by ThinkProgress, the Center for American Progress’ blog, which fills liberals’ social-media feeds with quick-hit news and analysis. “There’s been a real gap between the left and right on reporting and the quality of the people engaged in those efforts, and we thought we could help,” says Michael Goldfarb, the Beacon‘s publisher. “Another objective was to have some fun going after people.”

Conservative outlets from Fox News to Breitbart and the Daily Caller also offer alternatives to the perceived liberal bias of the mainstream media. But they have mostly emphasized opinion and aggregation over breaking news. David Brock scored some scoops in the Clinton-era American Spectator, but right-leaning outlets’ record of hard reporting has since been spotty. While liberal sites like Talking Points Memo and the Huffington Post have been awarded the industry’s highest honors (a Polk Award and a Pulitzer Prize, respectively), their conservative competitors have been notable mostly for overhyping and clinging to stories like Benghazi, Solyndra, or the IRS’s targeting of right-wing groups, long after mainstream reporters have moved on.

And when the Beacon‘s contemporaries do try to break news, they often get it wrong: In 2012, the Daily Caller published a series of now thoroughly debunked reports that Sen. Bob Menendez, a New Jersey Democrat, had consorted with prostitutes in the Dominican Republic. And then there’s conservative blogger Charles C. Johnson, who’s demonstrated a knack for flinging dirt but not a sense of proportion. For years, Markay argues, many conservatives “thought all they needed to do was to point out bias” and satisfy a dedicated right-wing audience. The Beacon aims to pop that media bubble—to “break out of the insular conversation and report stuff that’s compelling enough that other people pick up on it.”

Part of the problem in producing smart conservative reporting, according to Goldfarb, is a lack of training grounds for right-leaning journalists. Becoming a reporter has “not been a real career path on the right,” says the former Weekly Standard writer and spokesman for Sen. John McCain’s 2008 presidential campaign. Take Rob Bluey, a mentor for many of DC’s young conservative political journalists and the editor of the Daily Signal, a news site launched by the Heritage Foundation in 2014. When he graduated from college in 2001, Bluey says, “My dream job was at the Washington Post.” But, he recalls, “I could probably count on one hand, maybe two, conservative places that had jobs for journalists. The circle was pretty tight.” He took a job with the Media Research Center, and then moved to Human Events. He next headed to Heritage, where in 2011 he hired Markay as the think tank’s first investigative reporter. A few conservatives have tried to establish reporting outlets over the decades, Bluey explains, but the institutional right has only recently started to appreciate the need to get beyond messaging. Now, he says, conservatives are playing catch-up.

The Beacon hasn’t always steered clear of stories that please the base but don’t really stand up. One article, noted The New Republic, reported that then-Treasury Secretary Timothy Geithner had called Obama’s 2013 budget “unsustainable”; he’d actually been talking about future health care costs. Another article claimed NPR had carried water for a donor by publishing a “series” of anti-nuclear articles; one of the two examples was a reposted article from Foreign Policy. And the Beacon isn’t above titillating for traffic. The site serves up regular “news” about bikini model Kate Upton along with short pieces that push conservatives’ buttons (“Daniel Halper Explains How the Clintons Are Like the Mafia”), usually without a reporter’s byline.

Nonetheless, the Beacon‘s goals have become increasingly ambitious. In August, Goldfarb and Matthew Continetti, the editor in chief, declared that the site would one day take “its rightful place alongside the New York Times and the Washington Post.” That goal may not be so reality-based—those papers together employ some 1,800 journalists—but the Beacon has already proved its reporters can write the kind of stories it takes to shake things up. Conservatives “have better opinion journalism,” Goldfarb says, “but that has not been sufficient to win the fights. You need facts, and facts are in short supply on the right.”