It’s April Fools’ Day! Or is it? It is. But how could you know? I’m just some schmuck stating a fact. On most days you could believe me—but on this day, April 1, according to tradition, anything stated as fact must be viewed with suspicion. Because it’s April Fools’, and on April Fools’ otherwise normal, sane, decent, jazzy, fun, neat, and cool people lie. For no real reason, really. Rarely are the lies funny. Mostly they’re just “haha, I tricked you into believing something that could be true but isn’t. GULLIBLE IS WRITTEN IN THE SKY, DIPSHIT.”

The internet is so awful on April Fools’. It makes me want to put a knife in my head. The information superhighway is filled with hoaxes and bullshit on a normal day! On April Fools’ Day, it’s extra unreliable. Sometimes the “pranks” aren’t even pranks. Here is the front page of Amazon today: 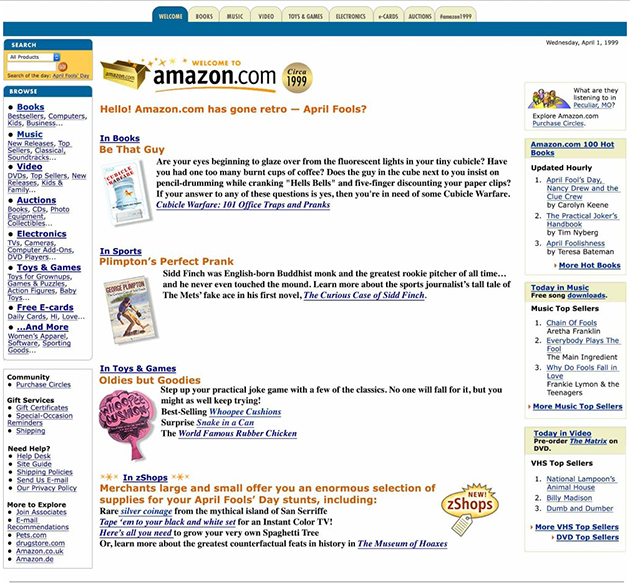 “Whoa, what happened to Amazon? This new design is crazy! It looks like it’s from like olden days or something! Oh, snap! It’s an April Fools’ Day prank! This corporate web portal just S-E-R-V-E-D me good.” Except, not really, because it says in big bright words “Amazon.com has gone retro—April Fools.” It’s explaining it’s own awful prank. It’s supposed to be what? Cute? Is that what April Fools’ Day is now? An opportunity for #brands to be #cute? It’s ironic because in reality April Fools’ is about misleading people and #brands spend every day doing that.

To be totally real, April Fools’ essentially exists to allow boring unfunny people to let loose one day a year by lying to their friends and colleagues.

Man runs into apartment. A beautiful woman with a very sad way about her is there. He says, “honey, baby doll, light of my life, I love you!” “Leave me alone,” she says. “No, honey, you don’t understand. I did it.” “Did what?” “I left her! I left my wife!” He shows her his left hand. There is no ring on his ring finger. She’s overjoyed. She jumps into his arms, wraps her legs around him, kisses him hard and long, and they fall back onto her bed and make passionate love. Then the guy gets out of bed, puts the ring back on his finger and says, “April Fools’!”

However there was once a funny April Fools’ prank. It happened once and only once and it will be told about in stories for generations to come: 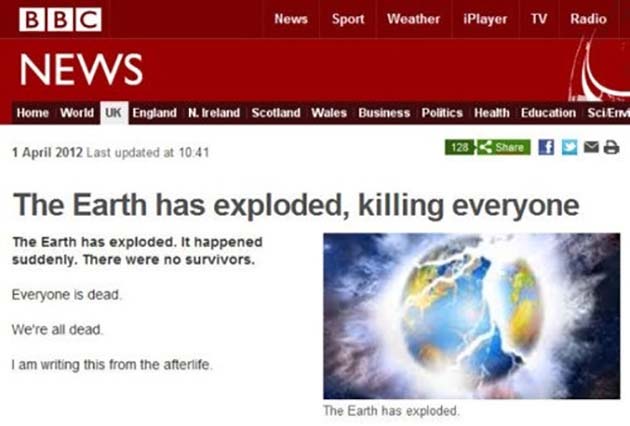 In 2012, this image made the rounds on the internet purporting to show how the BBC “won April Fools” with a great prank. (For some reason many news organizations prank their readers on April 1.) But it was not the case. It was actually a joke created by writer Greg Stekelman.

The BBC have outdone themselves with this year’s April Fools joke. http://t.co/oApV9Yjx

As he put it in a comment on this Gothamist post, “It seems ironic that an article about April Fools you didn’t take the time to check whether the article was actually from the BBC. I thought it would be fun to do an April Fools’ story that was so implausible that no one would think it was real. Oh well.”

So on April 1 let us think of Greg Stekelman, the man who told the only funny April Fools’ joke ever.