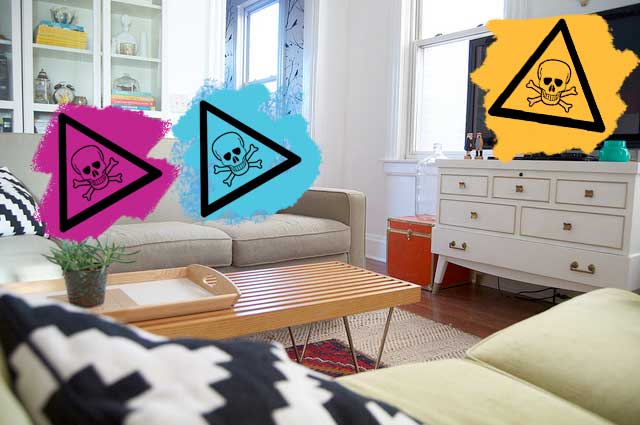 Flame retardant chemicals are in millions of products, from mattresses and couches to car seats to electronics. In 2011, Environmental Science & Technology published a study that found that 80 percent of 100 randomly tested children’s products were covered in fire-retardant chemical. But there’s a growing consensus that these chemicals don’t belong in our homes: They’ve been linked to cancer, hormone deficiencies, and neurological and developmental problems.

Research has found that manufacturers are simply replacing the old flame retardants with just-as-toxic chemicals.

Between 2009 and 2013, the chemical industry agreed to phase out a particularly harmful flame retardant known as polybrominated diphenyl ethers (PBDEs)—but further research from scientists at the Environmental Working Group and Duke University has found that manufacturers are simply replacing PBDEs with just-as-toxic, structurally similar chemicals.

Now, a diverse group of organizations—including the American Academy of Pediatrics, the International Association of Fire Fighters, and the Consumer Federation of America—is calling for the ban of any children’s products, furniture, mattresses and electronics that have traces of any of the chemicals associated with flame retardants.

“It’s time to stop moving from one harmful flame retardant to its chemical cousin,” said Arlene Blum, founder and executive director of the Green Science Policy Institute, in a statement about the petition that she and nine other organizations filed with the Consumer Product Safety Commission (CPSC).

If the ban catches on, it will come as a major blow to the chemical manufacturers, who, for decades, have been downplaying concerns about flame retardants’ toxicity. The companies’ strategies have been compared to those used by Big Tobacco: They cleverly confuse the public into believing scientific findings are a matter of opinion and up for debate.

Another problem with flame retardants: It’s not even clear that they work.

The similarities between the two industries shouldn’t come as a surprise, given their interconnected past. In an explosive 2012 investigative series, the Chicago Tribune reported that tobacco companies played a major role in the promotion of flame retardants. After a slew of apartment fires caused by lit cigarettes, the tobacco companies looked for a scapegoat and found one in furniture. Suddenly the media was focusing on flammable dangers we live around everyday—instead of the actual cause of many of these household fires: cigarettes.

The chemical companies, too, quickly realized how lucrative fire retardants could be—in 2012, the value of the market for the chemicals was estimated at $5.1 billion. Part of the reason for the companies’ success was a subtle astroturf campaign: In 2007, Albemarle Corporation, a leading flame retardant manufacturer, teamed up with two other chemical conglomerates to create Citizens for Fire Safety, an organization that advocates for increased use of flame retardants. The organization, which marketed itself as a neutral source of information for consumers, folded in 2012 after the Tribune exposed the real players involved.

Another problem with flame retardants: It’s not even clear that they work. According to the Tribune, in 2009 government scientists lit two couches on fire, one with fire retardant chemicals in its foam and one with out them. Within four minutes “both were engulfed in flames.”

“We did not find flame retardants in foam to provide any significant protection,” Dale Ray, a project manager with the Consumer Product Safety Commission and overseer of the study told the Tribune.

Despite this finding, flame retardants have stuck around—in products, and in people’s bodies. The chemicals, considered persistent organic pollutants, show up in dust particles, which we (and our food) absorb. Particularly vulnerable groups are firefighters, who are exposed to immense doses when extinguishing fires in products that are covered in the chemicals, and children, who are exposed when they play on the floor near dust and stick their hands in their mouths.

Last year, scientists from Duke University and the Environmental Working Group tested the urine of 22 mothers and 26 children. All the samples came back positive for exposure to Tris(1,3-dichloroisopropyl)phosphate (TDCIPP), one of the fire retardant chemicals that was developed to replace PBDEs. The children’s average TDCIPP concentration levels were fives times that of the mothers. TDCIPP caused the growth of tumors when tested on animals and has been labeled as carcinogenic by the state of California under Proposition 65.

“The science is in on this class of flame retardant chemicals,” said Nancie Payne, president of the Learning Disabilities Association of America, which also signed the Consumer Product Safety Commission petition. “They harm brain development, and have no business being in consumer goods.”