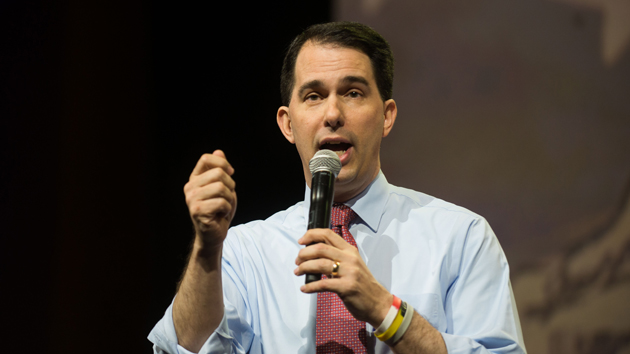 Liz Mair, the GOP operative who resigned from Wisconsin Gov. Scott Walker’s campaign-in-waiting after a day on the job, is in campaign mode again—and this time, she’s targeting her former boss. On Tuesday morning, Mair sent an email detailing Walker’s “Olympic-quality flip-flop” on the issue of immigration.

On Monday, Breitbart reported that Walker is the only declared or likely GOP candidate so far to support rolling back legal immigration to the United States, including for highly skilled workers. In her email, Mair pointed out that, historically, Walker has hardly been an immigration hardliner: In 2013, he vocally supported expanding legal immigration, and as recently as March, he said he was in favor of giving undocumented immigrants a path to citizenship. She suggested that Walker’s back-tracking could make him an easy target for strong GOP rivals.

Mair, who served on Walker’s recall campaign in 2012, resigned from the governor’s PAC in March in the wake of a kerfuffle over several tweets in which she criticized Iowa and its outsized political importance. Mair told Mother Jones she did not call out Walker in service of a client. She said she is “in the camp of people who see immigration as a benefit, who believe we should be welcoming to immigrants and make legal immigration easier, and who favor comprehensive immigration reform in some form…I’ve also long been highly critical of flip-floppery.”

Here’s an excerpt from her email:

In fulfilling my professional duties as constructed today, as opposed to on March 16, I wanted to flag the below Olympic-quality flip-flop on immigration policy to you. Apologies if this seems crass to some of you, but I would not be meeting certain responsibilities if I did not shoot this email out.

Yesterday, it was reported that Scott Walker has now adopted the immigration position of Sen. Jeff Sessions and has been taking instruction from Sessions on the issue of immigration. Notably, Sessions wants to further restrict legal immigration including high-skilled immigration, a position that is at odds with the traditional GOP anti-amnesty stance taken by virtually all presidential candidates, and which also puts him at odds with conservative policy experts and economists…this new positioning seems to represent a full 180 degree turn from where Walker has been on immigration historically, which is to say in the very pro-immigration and even pro-comprehensive reform camp…

Setting aside the substance of the policy, as the 2008 election demonstrated, it is really difficult in the age of Google to execute full policy reversals without earning a reputation as an untrustworthy, “say anything to win,” substance-and-guts-free politician. Even in 2012, when Republicans nominated Mitt Romney, his reputation for policy, er, flexibility was a significant negative for him and one that diminished enthusiasm for the candidate, probably adversely impacting his performance in that race.