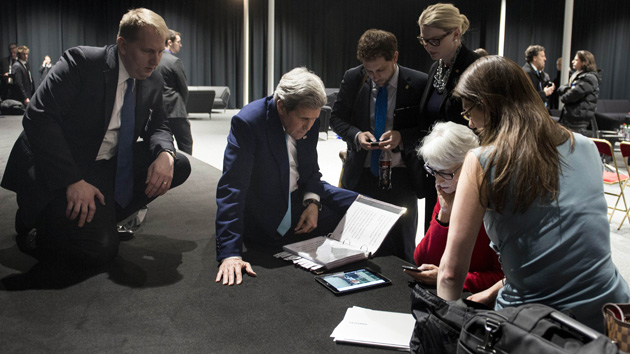 Shortly after the participants in the Iranian nuclear talks announced that a double-overtime framework had been crafted, I was on television with Rabbi Shmuley Boteach, who is something of a celebrity rabbi, a failed congressional candidate, and an arch-neoconservative hawk who has been howling about a potential deal with Iran for months. Not surprisingly, he was not pleased by the news of the day. He declared that under these parameters, Iran would give up nothing and would “maintain their entire nuclear apparatus.” Elsewhere, a more serious critic, Sen. Tom Cotton (R-Ark.), who last month had organized the letter to Iran’s leaders signed by 47 GOP senators opposed to a deal, groused that the framework was “only a list of dangerous US concessions that will put Iran on the path to nuclear weapons.”

These criticisms were rhetorical bombs, not statements of fact. Under the framework, Iran would give up two-thirds of its centrifuges used to enrich uranium and would reduce its stockpile of low-enriched uranium (which is the raw material used to develop bomb-quality highly-enriched uranium) from 10,000 kilograms to 300 kilograms. These two developments alone—and the framework has many other provisions—would diminish Tehran’s ability to produce a nuclear weapon. Its nuclear apparatus would be smaller, and under these guidelines, Iran’s pathway to nuclear weapons, while certainly not impossible, would be much more difficult. Yet because politics dominates the debate over this deal—as it does so often with important policy matters—foes of the framework could hurl fact-free charges with impunity.

It is perhaps easier to do so when the subject is a highly technical matter. Nuclear nonproliferation is a subject that depends upon science. (Do you know how many centrifuges it takes to spin enough material for a bomb?) And it is difficult for nonexperts to assess any nonproliferation agreement. But it is rather easy to decry Tehran’s leaders as evil tyrants who support terrorism, despise Israel, and cannot be trusted. Little of that sort of attack has any bearing on evaluating this framework, which may or may not lead to a concrete accord. Trust is not at issue, for example. What counts is whether the technical means of inspection agreed upon are deemed sufficient to monitor the nuclear program, materials, supply chain, and facilities that remain. Yet who can tell?

Well, there are nonproliferation experts. A fair number, in fact. These are scientists and policy mavens who are trained to study and answer the questions posed by this framework. They are not infallible. They may disagree among themselves. But if there ever were a policy debate that should be shaped by scientific expertise, this is it. The politicians, pundits, and, yes, rabbis (or, at least, one rabbi) ought to give due deference to the guys and gals who know this stuff. So I’ve collected a few initial takes from arms control policy experts who are mostly keen on the possible deal, and here they are:

Anthony Cordesman, the Arleigh A. Burke Chair in Strategy at the Center for Strategic and International Studies, a former national security aide to Sen. John McCain, and a former director of intelligence assessment in the Office of the Secretary of Defense: “[T]he proposed parameters and framework in the Proposed Joint Comprehensive Plan of Action has the potential to meet every test in creating a valid agreement over time…It can block both an Iranian nuclear threat and a nuclear arms race in the region, and it is a powerful beginning to creating a full agreement, and creating the prospect for broader stability in other areas. Verification will take at least several years, but some form of trust may come with time. This proposal should not be a subject for partisan wrangling or outside political exploitation. It should be the subject of objective analysis of the agreement, our intelligence and future capabilities to detect Iran’s actions, the International Atomic Energy Agency’s (IAEA) capabilities to verify, and enforcement provisions if Iran should cheat. No perfect agreement was ever possible and it is hard to believe a better option was negotiable. In fact, it may be a real victory for all sides: A better future for Iran, and greater security for the United States, its Arab partners, Israel, and all its other allies.”

William Burns, president of the Carnegie Endowment for International Peace, former deputy secretary of state, and former career ambassador in the Foreign Service: “In a perfect world, there would be no nuclear enrichment in Iran, and its existing enrichment facilities would be dismantled. But we don’t live in a perfect world. We can’t wish or bomb away the basic know-how and enrichment capability that Iran has developed. What we can do is sharply constrain it over a long duration, monitor it with unprecedented intrusiveness, and prevent the Iranian leadership from enriching material to weapons grade and building a bomb…The history of the Iranian nuclear issue is littered with missed opportunities. It is a history in which fixation on the perfect crowded out the good, and in whose rearview mirror we can see deals that look a lot better now than they seemed then. With all its inevitable imperfections, we can’t afford to miss this one.”

Matthew Bunn, professor at Harvard University’s John F. Kennedy School of Government and coprincipal investigator at the Project on Managing the Atom: In a PowerPoint presentation he notes, “The proposed deal is the best chance to stop an Iranian Bomb. Deal would impose technical barriers that would take overt breakout off the table as a plausible option, and make sneakout more difficult. Political effects of the deal would undermine Iranian bomb advocates, reduce the chance of an Iranian decision to build the bomb. The credible alternatives—a return to sanctions or military strikes—pose significantly higher risks to US and world security. The deal is highly imperfect—but better [than] the other options realistically available.”

Dan Joyner, University of Alabama School of Law professor, author of International Law and the Proliferation of Weapons of Mass Destruction, and contributor to ArmsControlLaw.com: “Overall I think the framework of agreement is a very good one. Iran definitely made some very significant concessions. In fact, one might be forgiven for thinking that, with all of the specificity placed on Iranian concessions, and really only fairly vague wording on the lifting of unilateral and multilateral sanctions (i.e., regarding timing) in the joint statement, Iran showed the most diplomatic courage in agreeing to this framework. I’m sure there is much that was agreed to that we don’t know about, and I have no doubt that [Iranian Foreign Minister Mohammad Javad] Zarif and his team reached a satisfactory understanding with their negotiating partners on the sanctions question from their perspective. But I suppose I just wanted to highlight that Iran is the party that made the most obvious significant concessions in this framework agreement.”

Gary Samore and Olli Heinonen of Harvard’s John F. Kennedy School of Government and members of a group called United Against Nuclear Iran: The New York Times reports, “Mr. Samore…said in an email that the deal was a ‘very satisfactory resolution of Fordo [enrichment facility] and Arak [plutonium reactor] issues for the 15-year term’ of the accord. He had more questions about operations at Natanz [enrichment facility] and said there was ‘much detail to be negotiated, but I think it’s enough to be called a political framework.’ Mr. Heinonen, the former chief inspector of the International Atomic Energy Agency, said, ‘It appears to be a fairly comprehensive deal with most important parameters.’ But he cautioned that ‘Iran maintains enrichment capacity which will be beyond its near-term needs.'”

Joseph Cirincione, president of of Ploughshares Fund, a global security foundation, and former director for nonproliferation at the Carnegie Endowment for International Peace: “The agreement does three things. It blocks all of Iran’s pathways to a nuclear bomb. It imposes tough inspections to catch Iran should it try to break out, sneak out, or creep out of the deal. And it keeps our coalition united to enforce the deal. Under this deal, Iran has agreed to rip out two-thirds of its centrifuges and cut its stockpile of uranium gas by 97 percent. It will not be able to make any uranium or plutonium for a bomb. Many of the restrictions in the agreement continue for 25 years and some—like the inspections and the ban on building nuclear weapons—last forever.”

Frank von Hippel, an expert with Princeton’s Science and International Security Program: According to the McClatchy Washington Bureau, “Frank von Hippel said he was surprised that Iran had accepted an enrichment level of 3.67 percent and hadn’t insisted on 5 percent. ‘There are still details to be filled in, but I like it a lot,’ von Hippel said on the framework…’On transparency, it looks like they really are doing a lot.'”

As many have noted in the past day, a framework is only a framework. There are plenty of tough and complicated details to sort out. The deal may fall apart, especially with conservatives in both Washington and Tehran—and Israeli Prime Minister Benjamin Netanyahu and his crew—sniping away and looking to subvert any agreement. But as the heated debate continues, it will be important that nonproliferation experts play a critical role in the discourse. Science-based statements, not snarky sound bites, should be the weapons of choice.