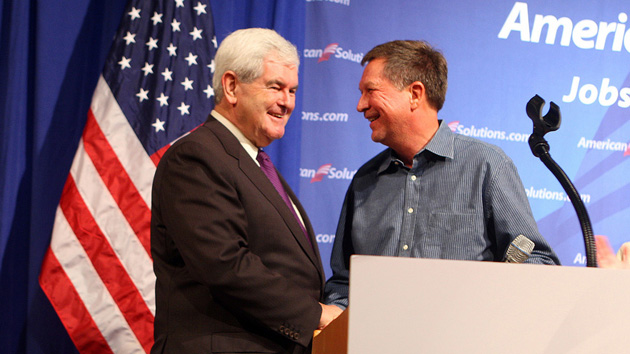 Newt Gingrich and John Kasich in 2010 <a href="https://www.flickr.com/photos/americansolutions/5124539402/in/photolist-8NQAWQ-8NQB2C">AmericanSolutions</a>/Flickr

If Gov. John Kasich (R-Ohio) runs for president, and it looks like he might, he’ll be getting the band—the Newt Gingrich band—back together.

Last week, Kasich announced that he was bringing on Bob Walker, a congressman-turned-lobbyist, as a volunteer adviser to his New Day for America political action committee, which is functioning like the governor’s campaign-in-waiting. Walker was a major player in Gingrich’s failed 2012 presidential run, and he and the former House speaker—and Kasich—go way back.

Walker and Gingrich have been close friends since the late 1970s, when they were first elected to the House of Representatives—Walker from Pennsylvania and Gingrich from Georgia. Kasich arrived in 1983 from Ohio and they bonded through the Clinton years when the Republicans went from minority to majority in Congress, with Gingrich as their leader. Walker served 10 terms before he retired in 1997 to start a DC-based lobbying shop, whose clients have included Comcast, American Airlines, and the natural gas industry.

During the Reagan-era culture wars, Walker earned a reputation as an outspoken and confrontational conservative lawmaker, known for his hard-line stances on drugs. In 1986, he introduced a symbolic bill demanding that the entertainment industry stop “glamorizing” drug use. Two years later, he authored legislation to create harsh anti-drug rules for employers who received federal funds. In an editorial entitled “Garbage,” the Washington Post said Walker’s bill would force federally supported employers to become “drug police.”

Congressional Quarterly once reported that Walker “has rubbed too many nerves to be very popular” in Congress. Yet Gingrich appreciated his loyalty, and elevated him to House deputy whip following the GOP takeover in 1994.

During the last presidential election, Walker chaired Gingrich’s doomed presidential bid. He served as his confidant-in-chief and Gingrich’s most visible surrogate in the media. As the former speaker became the most serious conservative opponent to Mitt Romney, Walker told Politico, “There are candidates that see [Gingrich] with the potential to coalesce the conservatives behind him. They are panicked. They are desperate.”

Ultimately, Gingrich did not unite conservatives—as he pounded Romney for being a corporate vulture—and his campaign began to fall apart after poor showings in key states, including Florida. And part of the problem, besides the candidate, was the campaign’s managers. Citing the campaign’s debts and staff resignations, the conservative Washington Times proclaimed: “Newt’s presidential campaign has got to be one of the worst ever run in American history.” Walker focused on big-picture strategy, but a Slate post-mortem of Newt 2012 noted that Gingrich was done in by poor day-to-day organization and too many staff overhauls.

After the defeat, Walker defended his friend and remained a true believer: “I would’ve liked to have seen him become nominee…he is still the one figure in the party who has the capability of defining the direction of the country in broad historic terms.”

Now Walker is focused on Kasich’s potential bid. While Kasich has been visiting early primary states and developing a campaign infrastructure, Walker gave a glimpse of his role to the Washington Post: “I’ve been rallying support for him around town, passing along information and sharing what I’m hearing with his people in Columbus.” And he tells Mother Jones, “I am a 35-year friend of John’s who told him months ago that if he ever began to explore a presidential candidacy, I would be happy to be involved.”

But a key question is: What does Walker bring to the table? As a lobbyist, he has his own baggage. (As a presidential candidate, Kasich may have to defend his post-Congress stint at Lehman Brothers.) And the Gingrich campaign was hardly a résumé-builder for Walker. And there’s this: He’s a reminder that Kasich, who used to be one of the GOP’s young upstarts, is now a generation or two past that. “The grassroots folks are waiting for the breakthrough…someone youthful,” a veteran Republican operative says. “There’s no clamoring for a return for the Republican revolution” of the 1990s. But if Walker plays a prominent and public role in the Kasich effort—as he did for Gingrich last time—that might make it seem that Kasich prefers classic rock to more contemporary fare.