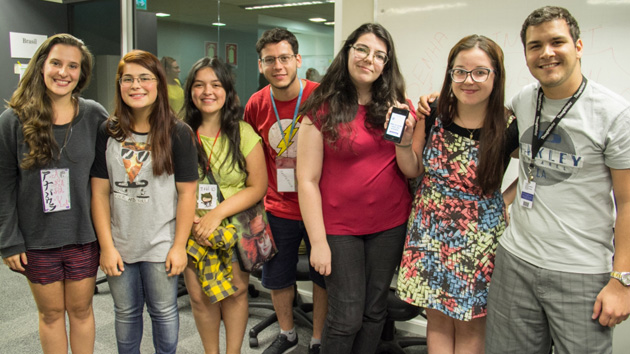 The winning team with male volunteers in Porto Alegre, BrazilGlobal Fund for Women

What if there was a platform that was kind of like Yelp, but with a feminist twist—where you could rate businesses (specifically bars, clubs, and restaurants) according to how their staff and patrons treat women? That’s the idea behind a mobile app dreamed up by a group of young female coders in Brazil. The women, ages 18 through 22, came up with it in February during an international hackathon organized by the Global Fund for Women. Tentatively named Não Me Calo (I Will Not Shut Up), it was chosen this week as the hackthon’s winning idea. Through the Global Fund’s partnerships with the tech industry, the team will get funds and mentoring to make their app a reality over the next six months or so.

Dozens of female coders, some as young as 11, spent 24 hours on ideas to build safer physical and virtual spaces.

Não Me Calo is a simple concept: Users will identify businesses where they’ve encountered physical and verbal abuse or harassment from employees or patrons. The app’s ranking system will call out the worst offenders and encourage app users to spend their money elsewhere. With any luck, the business owners will then take steps to alleviate the problem. “It provides a way to leverage existing technology, sort of like Foursquare and Yelp, platforms that allow you to check into public spaces in major cities, with an additional piece of information that probably isn’t being collected right now,” said Michaela Leslie-Rule, the Global Fund producer who coordinated the hackathon. “Our hope is that this would be available to women and girls globally.”

The event, which included girls as young as 11, brought together dozens of coders in New York City; Oakland, California; Porto Alegre, Brazil; Tapei, Taiwan; and Trivandrum, India. They spent 24 hours designing and building tools to create safe physical and virtual spaces for women and girls. Here are some of the other ideas that came out of the event:

Perv Radar: Coders in Tapei designed a map-and-alerts website that would track sexual harassment incidents by location. Their Pervert Map would show exactly where run-ins have occurred, with an anonymous comment feature that would allow users to log details about the incidents, as well as markers to identify safe zones like police stations. For a walkthrough, check out this video.

Red Alert: In Oakland, coders proposed an Android app to prevent kidnappings. It would come with a discrete GPS sensor you could attach to the underside of a bracelet or a bag zipper. In threatening situations, a woman could touch the sensor for five seconds to activate “red mode,” notifying preset emergency contacts and the authorities. The app would pinpoint her coordinates on a tracking map, with a history page to show her previous locations, as well as provide a list of hospitals and police stations in the area.

In India, sex ed is rare, and talking openly about sex is taboo, for girls and women especially.

Anti-Gamergate: In New York City, one team came up with a video game that puts players in the shoes of a woman in a date-rape situation on a college campus to confront tricky questions around sexual consent. (Check out this similar idea by game designer Nina Freeman.) Another team in the Big Apple created a 3-D animated game that requires players to help an avatar find its way through a maze of obstacles in the quest for reproductive health care. In India, coders proposed an online game about self-defense.

Talk It Out: Sex ed is in a sorry state in much of the United States, as this Mississippi teacher knows. But in India, it’s not even part of the curriculum in most schools, and talking openly about sex is pretty much taboo. Coders in Trivandrum created a website with a chat function that lets girls ask counselors about sexually transmitted infections, harassment, and sex. Back in Oakland, a team proposed an online chat room app to facilitate conversations about bullying and other forms of abuse. Another team in Brazil thought up a social network that would link women who want to learn a specific skill with other women who can teach it to them, with the goal of broadening job opportunities.