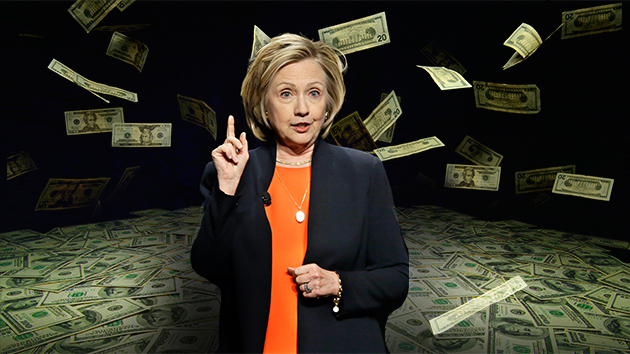 On the campaign trail, Hillary Clinton has been pushing hard to overhaul of the country’s broken campaign finance system. “We need to fix our dysfunctional political system and get unaccounted money out of it, once and for all, even if that takes a constitutional amendment,” Clinton said during one of her first official speeches in Iowa last month.

Clinton’s campaign finance rhetoric appears to be aimed at super-PACs, the quasi-independent organizations that bolster campaigns by buying ads. But when it comes to the major funders behind her own presidential campaign, the Democratic front-runner has yet to answer questions about how transparent she’s willing to be. When Mother Jones questioned the Clinton camp about whether it will disclose the names and fundraising totals of the key supporters—known as “bundlers”—who raise vast sums of cash, a spokesperson declined to provide an answer, saying only that the campaign was still figuring out its plans.

The Clinton campaign plans to reward supporters who bundle at least $27,000 with an invitation to a special campaign confab.

What exactly are bundlers? Donations to campaigns from individuals are capped at $2,700 for the primary election and $2,700 for the general election (meaning donors can give up to $5,400 to a candidate over the entire cycle). In theory, these restrictions limit the amount of influence that individual donors can exert over a campaign. But bundlers get around these caps by raising tens or hundreds of thousands of dollars from their wealthy friends and colleagues and channeling these massive sums to candidates. Even in an era when a few superrich donors can give as much money as they please to independent super PACs, bundlers are essential to most presidential bids. Super-PACs might be able to fund expensive ad buys with million-dollar donations, but it’s large bundled contributions that allow campaigns to hire staff, conduct polls, and carry out the rest of their day-to-day operations.

Because of the outsize role that bundlers play in paying the bills for would-be presidents, advocates for campaign finance reform have long called for a robust system of disclosure. But under current law, it’s up to each candidate to decide whether the names of these fundraisers will ever become public.

The Clinton campaign is initially asking bundlers to collect $27,000 each (that is, 10 donations at the maximum amount of $2,700). Those who reach this goal will earn the designation of “Hillstarter” and score an invitation to a special campaign confab at the end of May. The campaign refused to say whether it will disclose the identities of these Hillstarters—or whether it plans to release information about bundlers who end up raising far more than $27,000 during what is likely to be a billion-dollar campaign.

Lavishing bundlers with perks is standard practice for presidential campaigns. George W. Bush created tiers of bundlers with hokey names such as “Rangers” and “Pioneers.” In June 2012, Mitt Romney invited over 800 people who had bundled at least $50,000 for his campaign to an exclusive retreat in Utah, where they could hobnob with the candidate and his senior campaign staff. Bundlers may also receive more valuable rewards. A 2011 study by the Center for Public Integrity found that 184 of the 556 publicly named bundlers from Barack Obama’s 2008 campaign had landed administration roles for themselves or their spouses. That figure increased to about 80 percent for the top bundlers who raised more than $500,000.

In most cases, there are no rules mandating that candidates release the names of their bundlers. Federal law does require campaigns to list lobbyists who bundle more than $16,000, but even this modest rule is easy to skirt. Large lobbying firms can divvy up the fundraising among various partners to avoid being listed.

“The individual who is going to bring in millions of dollars is going to be treated differently than someone who just brought in $100,000,” says Craig Holman of Public Citizen. “We need to know more information.”

In 2008, Clinton offered minimal information about her bundlers. Donors who bundled more than $100,000 for her campaign earned the title of “HillRaiser,” and their names were released to the public. According to the watchdog group Public Citizen, whose White House For Sale project has tracked bundlers during recent presidential elections, a total of 324 people earned that designation.

But the ’08 Clinton campaign refused to release more specific bundler categories. It remained a mystery which fundraisers just barely crossed the $100,000 threshold, and which ones raised truly massive sums. “The problem is that it’s just in large increments, as opposed to an actual number,” says Public Citizen’s Craig Holman. “It needs to be better than this. When all we can say is, ‘At least $100,000,’ it could be $10 million or $20 million, we don’t know. And the individual who is going to bring in millions of dollars is going to be treated differently than someone who just brought in $100,000. We need to know more information.”