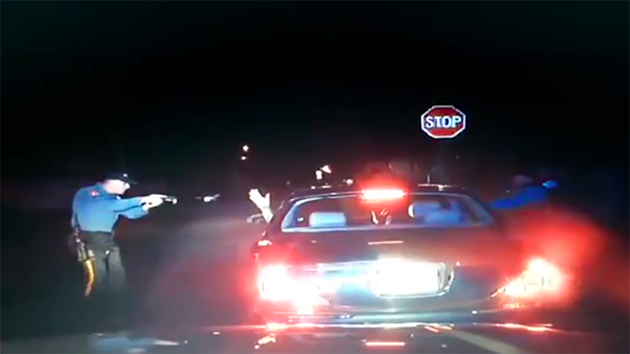 When police officers shoot or kill unarmed civilians, it can take months, even years, for the incidents to be officially investigated and publicly explained. As Mother Jones recently reported, the cop who shot 12-year-old Tamir Rice in Cleveland had yet to be interviewed by investigators, more than six months since Rice’s death. The family of 37-year-old Tanisha Anderson, who died after being restrained by police last November, also in Cleveland, is still waiting for answers.

The case of Jerame Reid has gotten far less attention. Reid was a passenger in a car that was pulled over on December 30, 2014, in Bridgeton, New Jersey. As recorded by the police car’s dashboard camera, two officers approached the car and allegedly found a gun in the glove box. When the 36-year-old Reid tried to get out of the car with his hands apparently up and in front of his chest, the officers opened fire, and Reid died. The officers in the case—Roger Worley and Braheme Days—were placed on paid administrative leave pending the outcome of an investigation.

The wait has been too long, according to Bridgeton Mayor Albert Kelly. In an op-ed published earlier this week, Kelly lays out exactly why the wait in these cases is such a problem:

Six months may not seem like a long time if you’re in the Cumberland County Prosecutor’s Office handling multiple cases, nor would it seem a long time if your view is one taken from the perch of the Office of the Attorney General.

But it is an eternity if you’re the grieving widow and part of a grieving family wanting some sense of closure. It’s also a stunningly long time if you and your family are waiting around day after day to find out your fate and what the balance of the rest of your life might look like.

Beyond that, it may well be an unacceptably long period of time for an entire community waiting to find out what exactly happened to one of its own, for better or for ill, on a cold December night a few days after Christmas, at what began as a routine traffic stop.

The time involved, just like the questions involved, is no small thing because for anyone who cares—for anyone who knows how quickly things can go from zero to sixty in the blink of an eye at what was essentially a routine interaction between a police officer and a citizen—it’s about knowing where the lines are drawn and maybe where they got crossed.

Mayor Kelly’s letter expresses the growing impatience with the slow official responses to police killings that have long been the norm. As David Harris, a law professor at the University of Pittsburgh, explained to Mother Jones reporter Jaeah Lee, recent events have changed the way Americans look at these investigations. “One year ago, we probably did not take a lot of notice,” he says. “It’s only since Ferguson, and especially since North Charleston and Baltimore, that we are seeing cases being evaluated and moved more rapidly.”