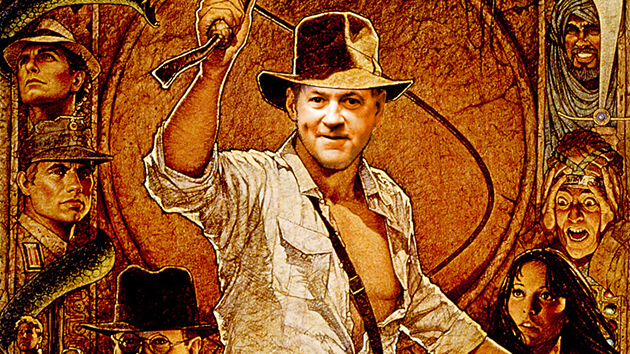 Harry Moskoff wouldn’t immediately strike you as the guy to discover the true location of the Ark of the Covenant, the chest that supposedly once held the stone tablets on which the Ten Commandments were written. He was born in Canada, studied jazz at Berklee College of Music, worked in IT, and started a company that specialized in copyright infringement claims when he moved to Tel Aviv 10 years ago. But in his free time, the ordained rabbi has dabbled in biblical archeology, poring over ancient texts and contemporary works, in search of any unturned stone that might help him track down the ark.

“I came up with a theory via Maimonides as to where the ark is located, which I later discussed with rabbis and archeologists in Israel,” he told the Times of Israel in 2013. “It was a Jewish Da Vinci Code type project.” His grand theory? It’s been in Jerusalem all this time, buried underneath the courtyard of the Temple of Solomon. To promote his discovery, in 2013 he made a sci-fi movie called The A.R.K. Report.

Last year, Moskoff, who describes himself as a “Jewish Indiana Jones,” published a nonfiction book, also called The A.R.K. Report, chronicling his search for this legendary artifact, and he got a boost from a higher power of a different sort—former Arkansas Gov. Mike Huckabee, who is now a Republican presidential candidate.

“From the days of ancient history to the modern interest created by movies like ‘Raiders of the Lost Ark,’ there has been a dogged curiosity about the biblical ‘Ark of the Covenant,'” Huckabee wrote in a blurb. “Rabbi Harry Moskoff’s spellbinding book, ‘The Ark Report,’ takes curiosity to clarity and gives the reader an understanding of why the authenticity of the real Ark could be a game changer for the world.”

Huckabee had one good reason to endorse the Moskoff’s book—he was in it. Moskoff snagged a sit-down interview with the former governor and featured it prominently in the middle of the book. In this lengthy Q&A, Huckabee discussed a two-state solution to the Israeli-Palestinian conflict (he was against it) and claimed the Obama administration was too cowardly to confront Iran. Huckabee, a onetime Baptist minister, also weighed in on Markoff’s theory regarding the ark, noting that modern-day archeology has consistently proven that the stories of the Bible are true: 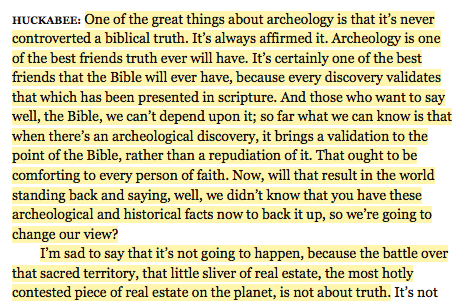 Moskoff’s’s theories go beyond the ark’s location. He claims that the CIA is “interested” in his “findings” and that the spy agency has interfered with archeological digs to prevent the discovery of biblical artifacts. Why would the spy service do this? Because the unearthing of such items, including the ark, would strengthen Israel’s claim to disputed territory.

So is a top-secret US agency conspiring to hide the Ark of the Covenant and other biblical evidence from the rest of the world for covert geopolitical motives? If elected president, will Huckabee undo this CIA cover-up and also reveal the ark and its godly power to all? In any event, we’ve seen this movie before: