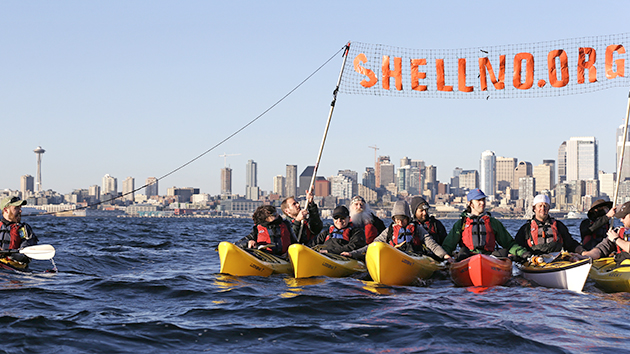 Protesters in Seattle have taken to kayaks as Shell's Arctic drilling fleet approaches the city.Elaine Thompson/AP

Royal Dutch Shell cleared a major hurdle this afternoon when the Obama administration announced conditional approval for the company’s application to drill for oil in the Chukchi Sea off Alaska’s North Slope. The decision came after a few months of public comment on Shell’s exploration plan, which was roundly condemned by environmental groups and several North Slope communities.

Shell’s plan involves drilling for oil in a patch of ocean called the Burger Prospect. The drilling is slated to take place this summer when sea ice is at its lowest. In anticipation of this decision, two massive oil drilling ships owned by Shell are en route to a temporary dock in Seattle; from there, they are scheduled to press on to the Arctic.

If the ships make it to the planned site, it will be the first attempt Shell has made to drill in the Arctic (an area believed to hold massive subterranean reserves of oil and gas) since its disastrous effort in 2012. Back then, Shell faced a yearlong series of mishaps as it tried to navigate the icy waters, culminating in a wreck of the Kulluk, one of its main drilling ships. For many environmentalists, that botched project was a sign that Shell is ill-equipped to handle Arctic waters.

Moreover, today’s decision underscored what many describe as an inconsistency in President Barack Obama’s climate change policy: Despite his aggressive rhetoric on the dangers of global warming, and a suite of policies to curb the nation’s carbon footprint, Obama has also pushed to expand offshore oil and gas drilling. Earlier this year, he announced a plan to limit drilling permits in some parts of the Arctic while simultaneously opening a vast new swath of the Atlantic ocean to drilling.

Allowing Shell to forge ahead with its Arctic ambitions flies in the face of the president’s own climate agenda, said Franz Matzner, associate director of government affairs at the Natural Resources Defense Council.

“It’s a total mystery why the Obama administration and [Interior] Secretary [Sally] Jewell are continuing down this path that is enormously risky, contradicts climate science, and is completely unnecessary to meet our energy goals,” Matzner said. “It’s a dangerous folly to think that this can be done.”

Before Shell can start drilling, it still needs to secure a few final federal and state permits, including one that requires Shell to demonstrate how it plans to protect ocean life during drilling and in the case of a spill. Those decisions are expected within the next month or so.

A spokesperson for Shell told the New York Times: “Before operations can begin this summer, it’s imperative that the remainder of our permits be practical, and delivered in a timely manner. In the meantime, we will continue to test and prepare our contractors, assets and contingency plans against the high bar stakeholders and regulators expect of an Arctic operator.”