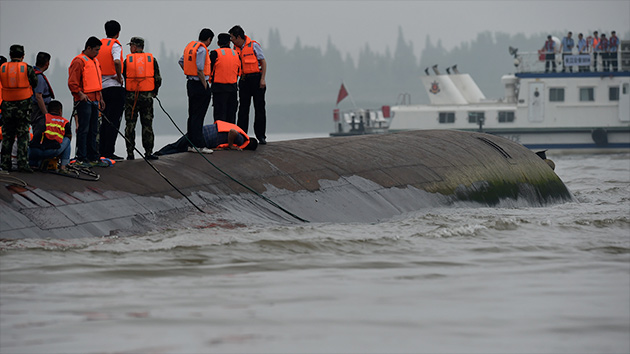 Much is still unknown about Monday’s deadly passenger ship accident on China’s Yangtze River that has left over 400 people missing, likely trapped in the hull of the capsized boat. The Eastern Star cruiser, carrying 456 people, was sailing in treacherous conditions, according to the ship’s captain and engineer, who were both rescued hours after the boat sank. China’s official weather service has since confirmed that there were heavy storms in the area.

While global statistics on boat disasters are hard to come by, the Eastern Star incident could end up being among of the deadliest passenger ship accidents in recent years, anywhere in the world. Just 26 fatalities have been confirmed so far, with 14 people rescued, according to CCTV. But once all the passengers are accounted for, the death toll could surpass the number of victims from last year’s ferry disaster in South Korea, which killed 304 people.

It’s been a tragic two years on the world’s waterways. Roughly 700 migrants from the Middle East and Africa drowned off the Libyan coast in April. A Bangladeshi ferry carrying up to 140 people capsized and sank in February, killing an estimated 70 people. And in May of last year, rescuers found just 40 bodies, after another boat sank in Bangladesh. Police there estimated that roughly 100 passengers were never found.

Monday’s accident in China raises questions about whether or not the ship should have been sailing in such extreme weather, and how quickly search and rescue teams were able to locate the boat and mount and effective operation. Those two factors are common contributors to maritime disasters around the world, according to Abigail Golden, a research associate with the Worldwide Ferry Safety Association.

While details about the latest incident are still sketchy, generally speaking “there are trends around the world that you can see, if you look at the data,” Golden said.

Golden maintains what is perhaps the most comprehensive database of ferry accidents that have occurred around the world in recent years (it’s open source, and available here). Golden conservatively estimates that, as of September 2014, roughly 16,880 fatalities had occurred in 160 deadly ferry accidents since 2000. Ninety-five percent of those accidents occurred in the developing world. A quarter were in Bangladesh, and nearly 6 percent were in China. Other countries where its particularly dangerous to take a ferry ride include Senegal, Tanzania, Indonesia, and the Philippines.

It’s unclear from this data whether or not boat trips like this week’s journey down the Yangtze are necessarily more dangerous than other forms of transportation, such a driving or taking a plane—a definitive, apples-to-apples comparison is hard to come by. But with boats, “a lot of issues are the same around the world,” said Golden. “It’s weak regulation, it’s overcrowding of vessels, lack of things like weather information, and a lack of training of the crew.”

“Human error is immensely prevalent,” Golden added. She estimates that 54 percent of total accidents and 67 percent of total fatalities are caused by human error. That includes over-crowding, misjudgment of weather conditions, and improper storage of cargo, which can result in unexpected shifts in the ship’s balance if cargo moves suddenly or is too heavy for the boat. (South Korean authorities pointed to this as a factor in last year’s accident).

Weather incidents, such as high waves and typhoons, were present in half of all the accidents Golden compiled, and while not fatal in and of itself, overcrowding played a role in roughly half of ferry accidents in the dataset.

“Honestly, safety is not a sexy or exciting concept to many people.”

Passengers reacting to a disaster, without proper safety advice or direction from the crew, might “rush to a single side of the ferry which of course can then capsize it, or they might climb to higher points of the ferry like the roof, which would then of course raise the center of gravity,” causing the ship to sink, she said. Once the ship has sunk, the disaster can quite easily overwhelm the search and rescue capabilities of the country involved. The final death tolls tend to be a result of “very multi-faceted” causes, Golden said.

Golden stressed that until more is known about Monday’s accident, it’s unclear whether the Eastern Star could qualify as a “ferry” for purposes of her study, since Golden’s dataset only includes boats that are part of regular commuter fleets that make scheduled stops, rather than chartered cruises.

The Worldwide Ferry Safety Association database is imperfect, Golden admits. Without a central agency to report statistics to, most of the information is gleaned from local news reports, which can be spotty and contradictory. “Obviously these reporters are not naval engineers or weather experts, so a lot of that information is quite vague,” she said. “Finding incident and accident reports that we can actually use for our purposes is quite difficult.”

But one thing is certain about ferry deaths, says Golden: “There is definitely more out there. If anything, what we have is an underestimate rather than an overestimate.”

Why is it so hard to find an authoritative dataset of passenger boat accidents and their causes?

“Honestly, safety is not a sexy or exciting concept to many people,” Golden said. “It’s not a quick fix. It’s not like going in with UNICEF after an earthquake and handing out bottles of water and seeing people’s beaming faces. It’s a long, slow, arduous process.”