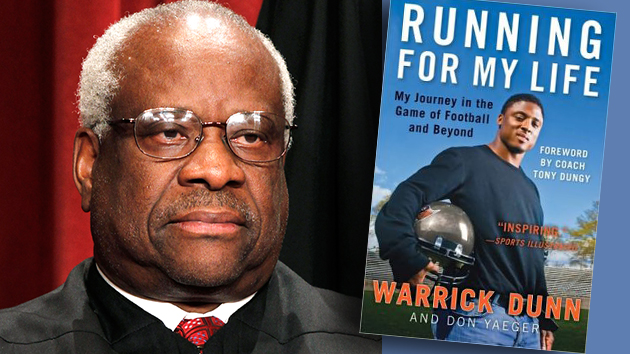 Supreme Court justices generally support their opinions with references to other cases and perhaps the occasional scientific study. But on Thursday, Justice Clarence Thomas cited an unusual source in his dissent in a death penalty case: the memoir of a professional football player. The player is also the son of the victim in the case. Thomas’ unorthodox move prompted two of his fellow conservatives to distance themselves from this section of his dissent, which they otherwise supported.

The case in question is Brumfield v. Cain, in which death row inmate Kevan Brumfield argued that the state of Louisiana denied him the opportunity to prove in court that he is intellectually disabled and, consequently, exempt from execution. Brumfield’s attorney had presented evidence that Brumfield was born prematurely, had been in special ed in elementary school, had a low IQ of 75, had been abused by his stepfather, and had spent time in a mental hospital and group homes due to his disability. But he was sentenced to death before a 2002 Supreme Court decision that the Eighth Amendment barred the execution of the intellectually disabled. After that decision, Brumfield petitioned the Louisiana courts to allow him a hearing to show that his disability should exempt him from execution. The Louisiana courts denied his requests, and the federal Fifth Circuit Court of Appeals upheld that decision. On Thursday, the Supreme Court majority reversed the lower court and ruled in Brumfield’s favor, sending his case back to Louisiana for further hearings on his mental capacity.

Thomas wrote a lengthy dissent in the case, contending that the court should defer to Louisiana and let the execution proceed. But he also suggested Brumfield should stop blaming his horrible childhood for his crimes because, after all, not everyone with a horrible childhood becomes a murderer.

Thomas’ case in point: Warrick Dunn, the author of the 2008 memoir Running for My Life: My Journey in the Game of Football and Beyond. Dunn, formerly a star NFL running back, is a minority owner of the Atlanta Falcons. Brumfield murdered Dunn’s mother when Dunn was 18. Here’s how Thomas sets up the case:

This case is a study in contrasts. On the one hand, we have Kevan Brumfield, a man who murdered Louisiana police officer Betty Smothers and who has spent the last 20 years claiming that his actions were the product of circumstances beyond his control. On the other hand, we have Warrick Dunn, the eldest son of Corporal Smothers, who responded to circumstances beyond his control by caring for his family, building a professional football career, and turning his success on the field into charitable work off the field.

Thomas spends several pages in his 27-page dissent contrasting Brumfield with Dunn. In case his meaning isn’t clear enough, Thomas adds a footnote, saying, “Like Brumfield, Warrick’s father was not a part of his life. But, unlike Brumfield, Warrick did not use the absence of a father figure as a justification for murder.” Thomas goes on to spend another few paragraphs detailing all of Dunn’s charitable contributions and activism, before taking a dig at Brumfield for filing too many appeals. Thomas accuses the majority justices of being insensitive to the horrific nature of the crime and for ignoring the victims in this case. To drive the point home, he attached a photo of Dunn’s mother (copied from Dunn’s memoir) to his dissent.

Thomas clearly identifies personally here with Dunn, an African American. Thomas was born in deep poverty in Pin Point, Georgia, into a home with no indoor plumbing. He made it out of Pin Point, and over the years he has displayed little tolerance for people, particularly African Americans, who blame their impoverished or traumatic upbringings for later failures in life.

Dunn exemplifies Thomas’ philosophy, so it’s not so surprising that Thomas, who played football at Yale, would relate to him. (Dunn has expressed support for Brumfield’s execution.) But Thomas’ effusive and extensive praise for the former NFL star in the dissent was a bit too much for his conservative comrades on the court.

The three other conservatives—Antonin Scalia, Samuel Alito, and John Roberts—joined his dissenting opinion. Yet Roberts and Alito balked at the gushing tribute to Dunn. Alito penned a one-paragraph opinion, joined by Roberts, declaring his support for Thomas’ opinion, except for the Dunn section: “The story recounted in that Part is inspiring and will serve a very beneficial purpose if widely read, but I do not want to suggest that it is essential to the legal analysis in this case.”