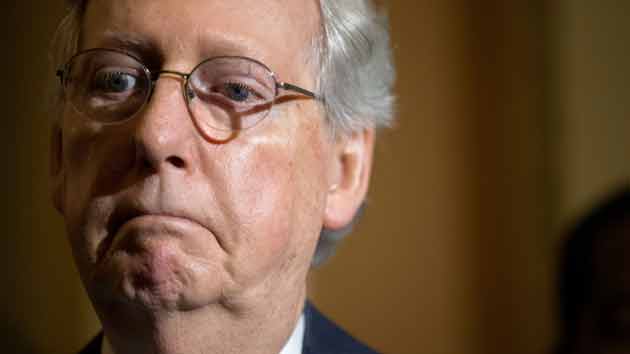 Senate Majority Leader Mitch McConnell speaks to the press prior to the passage of the USA Freedom Act.Andrew Harnik/AP

The USA Freedom Act, the bill that reforms the Patriot Act and stops the US government’s bulk collection of phone records, finally passed the Senate on Tuesday after the chamber rejected three amendments from GOP Majority Leader Mitch McConnell (R-Ky.) aimed at weakening the bill’s reforms.

McConnell originally supported leaving the Patriot Act with all of its surveillance powers intact, but he faced resistance from both Democrats and Republicans, including die-hards such as Sen. Rand Paul (R-Ky.) who were happy to let bulk collection simply disappear without creating a replacement. So McConnell agreed to proceed with the USA Freedom Act, but proposed four amendments to address what he called the bill’s “serious flaws.” (He withdrew one of them.)

Harley Geiger, chief counsel of the Center for Democracy and Technology, called McConnell’s amendments “unnecessary for national security” and said that they would “erode both privacy and transparency.”

The Senate agreed, rejecting the three amendments that came to a vote on Tuesday afternoon. McConnell’s proposed changes would have:

Delayed the shutdown of bulk collection: The USA Freedom Act calls for bulk collection to shut down within six months of the law’s passage. One of McConnell’s amendments would have stretched that out to a full year.

Kept arguments before the FISA court a one-sided affair: The FISA court reviews—and essentially always approves—requests for surveillance from government agencies. Its business is classified, and the only arguments presented are by government lawyers. The USA Freedom Act establishes a panel of experts to argue privacy concerns before the court, a move that one of McConnell’s amendments would have tried to limit.

Offered a potential backdoor for anti-reform efforts: Under the USA Freedom Act, bulk collection will be replaced by a “query-based” system, in which intelligence agencies would have to ask phone companies for records. That will take place six months after the bill is signed into law, but McConnell wanted to make the attorney general certify one month before the end of bulk collection that the new system would not harm national security. That may have given anti-reform lawmakers a final chance to scuttle the USA Freedom Act if the attorney general’s certification didn’t happen, or even raised any concerns at all.

Even if the amendments had passed, McConnell faced an uphill battle in the House: House Judiciary Committee chairman Rep. Bob Goodlatte (R-Va.) and ranking member Rep. John Conyers (D-Ill.) said in a statement on Monday that “[t]he House is not likely to accept the changes proposed by Senator McConnell.” Other House leaders also warned the Senate away from making changes to the bill.

Geiger called the USA Freedom Act’s passage “the most significant national security surveillance reform measure in the past three decades,” and it may be only a matter of hours before President Barack Obama signs it into law. And while privacy advocates didn’t get everything they wanted from surveillance reform, McConnell got nothing.