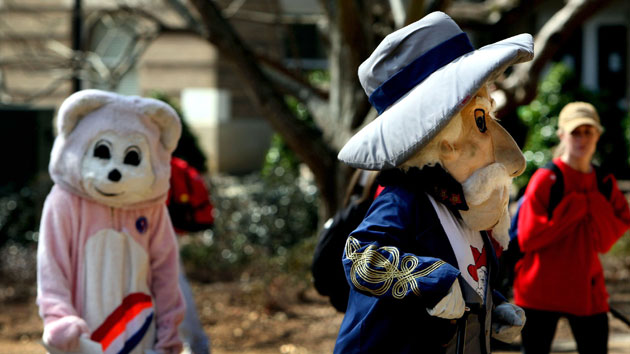 In 2010, the University of Mississippi replaced its old Colonel Reb mascot with a black bear. The Care Bear above didn't make the cut.Stan Carroll/The Commercial Appeal/ZUMA

On to Mississippi. Just hours after South Carolina Gov. Nikki Haley asked the state legislature to pass a law removing the Confederate flag from the grounds of the state Capitol on Monday, Mississippi’s Republican House Speaker Philip Gunn issued a call for his state to follow suit. The Confederate battle flag is embedded in the upper left corner of the official state flag, but “as a Christian,” Gunn wrote on Facebook, “I believe our state’s flag has become a point of offense that needs to be removed.” Henry Barbour, the nephew of former Republican Gov. Haley Barbour and a well-connected politico himself, echoed Gunn’s call.

How did white conservatives in Mississippi—the deepest of the Deep South—get to this point, not long after Haley Barbour, as governor, kept a Confederate flag signed by Jefferson Davis in his office? It helps that the state has gone through a process like this one before.

For decades, the University of Mississippi’s identity was intertwined with that of its football team, the Rebels. In 1962, Democratic Gov. Ross Barnett waved the Confederate flag in the bleachers in support of the school’s all-white team the night before a white mob attacked National Guardsmen assigned to protect the school’s first black student, James Meredith. The team’s mascot, Colonel Reb, wore a Confederate uniform and rode a horse called Traveler—the same name as the steed owned by Robert E. Lee. Over time, the mascot evolved into a less militant figure, a Colonel Sanders-esque old white man with a red suit and a cane, but the antebellum (or just bellum) nostalgia was evident. At games, students waved Confederate flags. They called the place “Ole Miss.”

But the team was also—to use what I think is the appropriate term—a lost cause. It was losing out on top-flight talent, and its leaders had an inkling why. In his 2013 memoir, the school’s former chancellor, Robert Khyat, recalled the pivotal moment, in the locker room after a shutout loss to the team’s archrival, Mississippi State. When Khyat walked in, the Rebels’ head coach told him, “We can’t recruit against the Confederate flag.”

The team stopped flying the flag at games in 1997. A few years later, again citing the impossibility of recruiting African Americans to the program, along with broader concerns about rebranding, it jettisoned Colonel Reb.

Colonel Reb and his die-hard supporters have not gone away quietly. An unsanctioned zombie Colonel Reb mascot continued to haunt campus on game days until 2009. A state legislator tried unsuccessfully to pass a bill restoring Colonel Reb. Last November, a state tea party leader launched a signature drive for a ballot initiative in the 2016 election that would bring back Colonel Reb once and for all. The old mascot has a small army of devoted fans who believe its absence is a direct assault on their heritage. It’s a lot like the Confederate flag.

Other aspects of the school’s makeover have faced a backlash. A new statue of Meredith on campus was vandalized in 2014. A white student placed a noose around the statue’s neck, attached to an old Georgia flag that included the Confederate symbol. (In March, the alleged perpetrator was charged with federal civil rights crimes.)

But the school is moving on. In 2010, after a seven-year spell without a mascot, it asked students to submit their own ideas for a new one. A group of students, real-life American heroes, launched a grassroots campaign to make Admiral Ackbar, the meme-friendly squid commander from Star Wars, the new face of Ole Miss:

Ultimately, the school went with a black bear (inspired by a William Faulkner short story), who wears slacks, a blazer, and a Panama hat. It also began phase three of its image rehabilitation campaign, scaling back the usage of the nickname Ole Miss.

Momentum notwithstanding, the campaign to change the Mississippi flag is still in the germination phase. But if the state government wants to follow its flagship university’s lead, we can think of a certain alien admiral who’d look great on a flag.