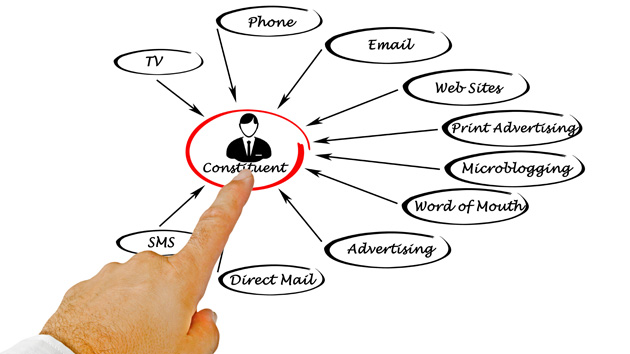 If you dread the deluge of political ads flooding the airwaves during election season, you’re not going to like what’s in store for you in 2016. Every device you own, from your smartphone to your Kindle to your Apple Watch, will be a delivery vehicle for attack ads and other campaign spots. Political operatives are drooling over the new-and-improved forms of digital advertising that allow them to reach voters with hyper-targeted messages, and such ads are expected to increase by almost double from 2012. But as voters are bombarded by online political advertising, they will know less than usual about where the attacks are coming from and who is paying for them, since the rules governing political ads on the web are far more lax than those covering more traditional television and radio ads.

There’s no doubt campaigns and outside spending groups are increasingly relying on digital advertising. Consider that in 2010, online advertising accounted for just 1.2 percent of all spending on media by Congressional candidates, according to the Center for Responsive Politics (full disclosure: I used to work there). By 2014, it accounted for 5.5 percent of spending—still only a fraction, but a quickly growing category. Larry Grisolano, who oversaw paid advertising efforts for both the 2008 and 2012 Obama campaigns, says that during President Obama’s first campaign, online efforts accounted for about 10 percent of the paid media budget. In 2012, it accounted for 15 percent. In the current election cycle, Grisolano predicts presidential campaigns will devote nearly a quarter of their spending to digital media. Considering that each side may spend more than $2 billion to get their candidate elected president, that’s hundreds of millions of dollars allocated for online messaging.

The political advertising toolbox now includes YouTube videos designed to go viral and meme-worthy images intended to be shared around social-media sites such as Facebook or Twitter. And the tools can be easily combined into full-blown integrated campaigns. For instance, yesterday, a super PAC supporting Rand Paul unleashed a hard-hitting, but bizarre, online attack on Jeb Bush—and much more than a television ad, the campaign features a lengthy YouTube ad “infomercial” and a branded website shilling “Bailout Bush” merchandise.

Even GOP Sen. Mitch McConnell (R-Ky.), who is not known as much of a disrupter as far as political campaigns go, has been riding the digital wave. During the last election cycle, his campaign unleashed a low-budget YouTube video against his opponent that was among the most memorable of the race. The video—dubbed “What Rhymes with Alison Lundergan Grimes?”—consisted of spliced-together video clips showing Grimes asking that very question in an auto-tuned warble, while amateurish lettering flashed on the screen with not-quite-rhyming answers (“not ready for prime time” and “sticks to the party line”). The bizarrely compelling ad garnered more than 600,000 views.

Such ads, along with images and GIFs designed to catch fire on social-media sites, will only be more prevalent in the upcoming election, according to digital advertising consultants and strategists. But a potential dark side of the digital explosion is that there is virtually no regulation or oversight over how candidates and independent groups spend their ad dollars online. While candidates will always need to disclose their spending, the myriad new ways to spend their money on the internet mean it will be that much harder to track how they are getting their message out and whom they are paying do so. For outside groups, which often don’t need to say where they get their funds and are typically vague on how they spend their cash, a move toward online advertising is an opportunity to further obscure their operations.

With an old-fashioned political ad—whether it appears on television, on the radio, in a newspaper, or on a billboard—the rules are simple: There must be a disclaimer that discloses who paid for it. While many groups use intentionally misleading or vague names, these outfits can at least be checked against Federal Election Commission disclosures or local television station records. With internet ads, the rules are much less clear.

“It’s not clear to me that the FEC has much of a watchdog role in terms of digital spending,” says the Center for Responsive Politics’ Bob Biersack.

Thanks to antiquated campaign finance laws, there is one giant loophole when it comes to internet advertising: A disclaimer is only required if someone paid to place the ad on a website. This does not cover material that is posted for free on a campaign’s website or that can be distributed via free-to-use apps and services, such as YouTube and Facebook. And so-called issue ads—spots that praise or slam a candidate without explicitly urging a vote for or against the person—are not required to carry a disclaimer of any kind when they run online. That means a dark money group—an outfit that doesn’t have to disclose its funders—can plaster the web with content (true or false) that is devastating to a particular candidate without having to claim responsibility for it. (Imagine a new group called real Americans for a Really Better America disseminating via social media a scurrilous video falsely accusing a candidate of improbity and not having to say who is behind this attack.)

Federal Election Commission rules got their last major overhaul in 2002. As it stands, there is simply no law that gives the FEC the ability to examine how a campaign or any other group spends its money online.

“It’s not clear to me that the FEC has much of a watchdog role in terms of digital spending,” says Bob Biersack, a senior fellow at the Center for Responsive Politics who previously worked at the FEC for 30 years. “Without some kind of statutory reason to care, the FEC isn’t going to force candidates to be too specific about their strategic behavior.”

Last fall, the FEC had an opportunity to update it rules on this front. But it failed to resolve how to regulate digital spending, and it may have  made the matter more unclear. The case before the FEC involved a dark money group called the Checks and Balances for Economic Growth, which during the 2012 election created two YouTube ads attacking Obama over his policies on coal. The group never reported any spending related to the creation of these ads. (Didn’t it cost something to make these videos? Shouldn’t the spending on these costs be reported?) Faced with the question of whether it should mount an investigation to determine if the group violated FEC rules, the commission stalled with a 3-to-3 vote, so there was no inquiry. The three Republican commissioners agreed with the group that a YouTube video should not be regulated as paid political advertising. The Republican FEC commissioners subsequently used the case to stoke fears that the FEC wanted to censor blogs—and the Drudge Report.

Current Republican FEC Commissioner Lee Goodman penned an op-ed for the Wall Street Journal in January accusing Democratic commissioners of wanting to clamp down on genuine grassroots political expression on the web. He claimed there is no way to distinguish political discourse from paid messaging. “The specter of government agents reviewing the thousands of daily online political posts is as impractical as it is ominous,” he wrote.

Democratic FEC Commissioner Ellen Weintraub accused the GOP commissioners of trying to block any new regulations for digital political advertising because they simply oppose the FEC expanding its authority under any circumstances. “I do think one of the reasons why people like Lee Goodman are so adamant about internet freedom is because basically the wave of the future is going to be a lot more online campaign advertising, and it will effectively be going underground in terms of getting any kind of regulation,” she says.