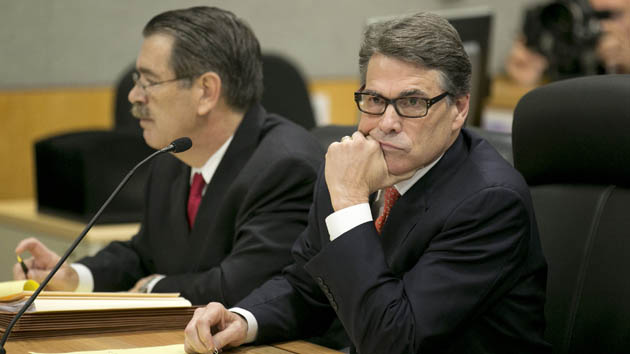 Rick Perry’s recently launched presidential campaign is off to a relatively smooth start. Sure, unlike his 2012 bid, he’s entering the field far, far behind in the polls—he’s trailing Donald Trump!—but he’s been getting good press. “Rick Perry’s still got it,” proclaimed Politico‘s Katie Glueck over the weekend, noting that “when it comes to glad-handing and working a crowd, Perry still sets the gold standard even if he trails in the polls.”

But as he launches his second run for the White House, Perry faces ongoing legal trouble back home in Texas stemming from his time as governor. Last August, a grand jury indicted Perry for abusing his power as governor. Perry has repeatedly requested that judges dismiss the case, only to be rebuked as the allegations progress toward a trial—one that could play out during the heat of the GOP primaries.

The case is a bit convoluted, but it stems from Perry’s 2013 effort to oust a county district attorney who investigates public corruption.

Texas has an unusual system of keeping politicians in check. There’s no a state-level commission that scrutinizes political malfeasance. Instead, the Travis County DA—based in Austin—is responsible for conducting these investigations.

Texas Republicans had never been huge fans of a system that entrusts this liberal county with that power (especially after the Travis DA charged former US House majority leader Tom DeLay with violating election law in 2005). Nevertheless, the status quo had hummed along until April 2013, when police arrested Travis County DA Rosemary Lehmberg for drunk driving. Lehmberg, a Democrat, was caught on videotape the night of her arrest threatening police officers.

Republicans, including Perry, immediately called on Lehmberg to resign. But she refused, managing to hold onto her job despite various legal maneuvers to remove her from office. So Perry attempted a more creative method to get rid of Lehmberg. In 2013, he used the governor’s line item veto power to cross out $7.5 million in funds allocated to the Public Integrity Unit, the subsection of the Travis County DA’s office that investigates political corruption. Perry directly linked the veto to Lehmberg’s arrest, saying he couldn’t allow the funds to go to this outfit “when the person charged with ultimate responsibility of that unit has lost the public’s confidence.”

That raised the ire of Texans for Public Justice, a left-leaning good government outfit. It filed a complaint alleging Perry had abused his office’s powers. “The governor overstepped his authority by sticking his nose in Travis County’s business,” the group’s executive director said in a statement at the time. This led to a judge tasking a special prosecutor to look into the case, and that led to a grand jury and felony indictment for Perry on one count of abusing his official capacity and another count of coercing a public servant.

Perry has been dismissive of the case, turning his mugshot into a fundraising t-shirt. And a number of legal commentators, even liberal ones, have agreed, questioning the seriousness of the charges leveled against Perry. University of California, Irvine law professor Rick Hasen termed it “the criminalization of ordinary politics.”

Yet judges in Texas aren’t ready to shelve the charges. San Antonio Judge Bert Richardson has repeatedly turned down motions from Perry’s lawyers to dismiss the case. In April, the case was assigned to a three-judge panel in Texas’ 3rd Court of Appeals. No date has been set for initial hearings, so the case might not get fully aired until the peak of presidential primary season later this fall. If Perry he ends up getting convicted on both counts, he would face a maximum sentence of over 100 years of jail time.

No matter the outcome of the case, Perry soon might get his wish to see Lehmberg off the public corruption beat: The state house and senate both recently passed bills to reassign corruption cases to the Texas Rangers—a law enforcement agency that is overseen by the governor’s appointees.