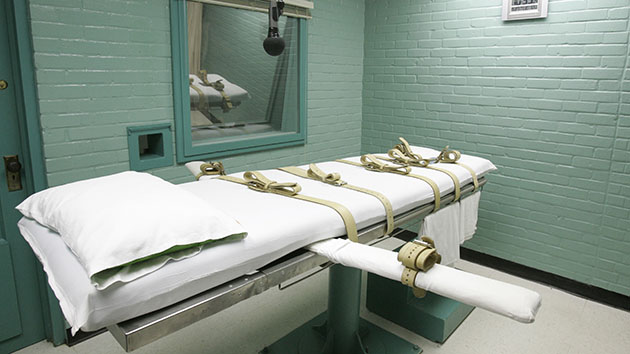 On Monday, the Supreme Court rejected a challenge to a state lethal injection protocol, allowing Oklahoma and other states to continue using a controversial sedative that has been implicated in a number of botched executions. The 5-4 decision in Glossip v. Gross was a win for conservatives who support the death penalty and viewed the case’s technical dispute over one state’s lethal injection methods as part of a “guerilla war,” as Justice Samuel Alito put it during oral arguments, waged by opponents of capital punishment to end the death penalty. Alito wrote the opinion for the majority.

The case turned on the use of one particular drug that Oklahoma uses in executions. But it had far broader implications for the death penalty. In recent years, states have struggled to obtain the drugs necessary to administer lethal injections. Had the court barred the use of the drug at issue in Glossip, it could have made it difficult for states to carry out the death penalty at all.

The question put forward in Glossip is gruesome: Does the Constitution prohibit a state from using a lethal drug cocktail that could cause a prisoner excruciating pain during execution? The case was brought by a handful of death row inmates awaiting execution in Oklahoma—a state that gained notoriety for the botched execution of Clayton Lockett—who argue that the state cannot promise they will not feel intense pain during their impending executions.

The lethal injection protocol at issue in this case is a standard three-drug process. The first drug renders the prisoner unconscious so he or she feels no pain. The second causes paralysis so the prisoner cannot breathe. The third stops the prisoner’s heart.

But what if the first drug doesn’t work? The problem for Oklahoma and other states that administer the death penalty is that neither of the two drugs previously used to knock out the prisoner are currently available. So Oklahoma and two other states now use a third drug, midazolam, for this purpose. But midazolam is a sedative used to treat anxiety, not an anesthetic. The Oklahoma prisoners argued that it does not reliably render people unconscious; it didn’t work well for Lockett. They feared they would still feel the excruciating pain caused by the second and third drugs. The inmates were supported in an amicus brief by 16 pharmacology professors who argued midazolam is “incapable of inducing unconsciousness.” Justice Elena Kagan described the sensation of experiencing the latter drugs as the equivalent of “burning somebody alive” with a drug.

In trying to counter these arguments, Oklahoma relied on a single expert, an Auburn University pharmacist who has never used midazolam on a patient and whose expert-witness report included 150 pages printed off Drugs.com to support his claim that midazolam is sufficient to prevent pain in executions.

Nonetheless, today’s opinion is the second time the Supreme Court has upheld the constitutionality of lethal injection since 2008. As in the previous case from Kentucky, Baze v. Rees, the decision came down along ideological lines, which were evident during oral arguments—the most bitter of the term. The conservative justices appeared frustrated with what they saw as a backdoor attack on the death penalty itself. “This Court has held that the death penalty is constitutional,” Alito said during oral arguments in April. “Is it appropriate for the judiciary to countenance what amounts to a guerilla war against the death penalty which consists of efforts to make it impossible for the States to obtain drugs that could be used to carry out capital punishment with little, if any, pain? And so the States are reduced to using drugs like this one which give rise to disputes about whether, in fact, every possibility of pain is eliminated.”

On Monday, the answer was no.