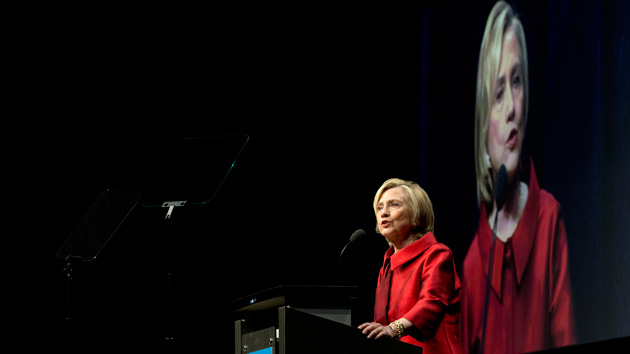 On Tuesday night, the State Department released some 3,000 pages of emails between Hillary Clinton and her aides during her tenure as secretary of state. The correspondence offers a fascinating behind-the-scenes view of American diplomacy in action, as well as the former first lady’s fashion choices. But some of the more intriguing exchanges involved the media—how her team sought to shape the news, the journalists they considered receptive to their message, and the close degree to which Clinton monitored how she was covered.

Much of this email traffic involved Philippe Reines, a senior advisor and spokesman for Clinton known for his combative exchanges with the press. One email thread that underscored the Clinton team’s focus on message-control came in late May 2009, ahead of a meeting of the Organization of American States. Its member-nations span North and South America and were poised to vote on whether to revoke Cuba’s decades-long suspension from OAS.

“If we set the expectation now that the outcome is likely to not go our way, ANY alternative – even one kicking the can down the road…- would be seen as a significant victory,” Reines emailed Clinton, who was planning to attend part of the OAS session in Honduras.

“How will we set any expectations?” Clinton replied. “Did anyone background the press yet?”

Reines responded that “in terms of setting expectations it would be a combo of a few overt and not overt things.” And he noted, “There’s one blogger that folks loosely follow, I know how to get her something through a 3rd party.”

After OAS members voted to revoke Cuba’s suspension, Clinton wrote to her advisers on June 3, 2009: “CNN is reporting this as being done against my wishes. Any way to salvage?”

Reines replied with a lengthy email explaining why the narrative was not as “dire as it seems in the moment.” He noted that President Barack Obama would be delivering a major speech in the Middle East the following day that would “blanket coverage and extinguish the Cuba stuff, so we just need to weather the night.”

we are suffering from two significant tactical problems: 1) you are here and removed 2) our press corps was out of position today and in flight, so the people we worked on all week and the ones likely to skew our way were replaced by reporters not connected to us. The two issues above will be rectified tomorrow in your two interviews – especially Greta who is malleable. We can use that to make a strong case on the principle, and the simple fact Cuba wasn’t in the OAS yesterday, and won’t be tomorrow. Everyday that passes reinforces that point. The time difference to East Coast will help us in moving whatever is said in these interviews tomorrow.

In his email, Reines was referring to an interview with Fox News’ Greta Van Susteren, which aired the following day. The topic of the OAS meeting did indeed come up:

VAN SUSTEREN: I know you’ve been to Honduras. The OAS, after you left—it looks like Cuba’s going to be invited back in.

CLINTON: No, that wasn’t the outcome.

VAN SUSTEREN: It wasn’t the outcome? What happened?

CLINTON: Well, we were very adamantly opposed to those who wanted to lift the 1962 suspension and leave it at that. That was not acceptable to the United States. That’s, unfortunately, the path that they were on earlier. And we made the case to many countries and found a receptive audience that we could agree to lift something from so long ago that was really part of the cold war, but we had to reaffirm the values and principles of the OAS. We had to explicitly reaffirm democracy and human rights. And then we had to have a process.

So yes, you can lift the suspension, but that’s the beginning, that’s not the end. Then Cuba has to decide whether it wishes to become a member of the OAS. And then the OAS must, according to its practices, purposes and principles, enter into a dialogue with Cuba and make a decision.

So this was the beginning. Unlike what some had hoped, to have a kind of fait accompli, we were able to create a consensus that the majority of countries in the OAS agreed with the United States.

VAN SUSTEREN: So we haven’t been snubbed.

CLINTON: Oh, not at all. In fact, this was a very good example of the kind of diplomatic engagement that we want to be involved with.

Later that year, Reines emailed Clinton a PDF of the “gorgeous cover” of Time magazine, which carried a cover story by Joe Klein on Clinton.

“How does the article compare to the cover???” she replied.

At another point in 2009, Clinton received an email from Lynn Forester de Rothschild, a major fundraiser for her 2008 presidential campaign and a leading PUMA (Party Unity, My Ass) activist who opposed Obama’s nomination that year. Rothschild told Clinton of her recent get-together with Leslie Gelb, the onetime president of the Council on Foreign Relations and a veteran New York Times journalist:

H,
I spent yesterday with Les Gelb on Nantucket. He had lots to say which might be of interest, but I thought the most important thing to tell you is to make sure you are aware of the Parade magazine piece he wants to do about you. He would like to do a day in your life, when you meet with members of Congress and international figures. He wants to show the impact you are having domestically and internationally. He said he would give you a veto over content and looked me in the eye and said, “she will like it”. Maybe you know this, but did not want it to fall between the cracks. Enjoy your vacation and love to all of you.
Xoxo,
L

Clinton forwarded Rothschild’s email to her staff: “Pls see below and scheduling options requested. Is this a cover story? Does anyone know?”

An aide later replied, “Yes, we’re trying to find a date that works for Les, but he is a little, shall we say picky.”

Gelb did indeed get his day-in-life-with-Hillary piece, which ran in Parade on October 25, 2009. (Gelb told Politico he did not give Clinton pre-publication approval over his article, but did let her team “look at text for fact checking. But as I remember, I made no changes.” Rothschild said her characterization of her conversation with Gelb had been incorrect. “I totally agree with Les Gelb saying that my use of the word ‘veto’ was bullcrap. Les is absolutely right that I should not have used that word.”)

“Our 24 hours together would prove both grueling and inspirational, full of diplomatic pageantry, big meetings with policy brainiacs, small sessions with trusted aides, a stream of time-consuming formal duties, and, of course, phone calls and more phone calls,” Gelb wrote. The day included a meeting with Holbrooke, the late diplomat then serving as the special envoy to Afghanistan and Pakistan, who described “a practical way to counter Taliban propaganda and enhance America’s image in Pakistan.” George Mitchell also made a cameo in the story: “On a line electronically secured from eavesdroppers, she converses with George Mitchell, the Middle East envoy (twice).”

Gelb concluded his story: “The Secretary, with her unfailing smile, repairs to her office for more calls and reading. It’s hard to read the mind of someone frozen in the public spotlight like Hillary Clinton. She has to be perpetually onstage. But what I think I glimpse beneath the unflagging smile and constant concentration is a very tired person—tense, frustrated, but absolutely determined to make her tenure as Secretary of State a success and to accomplish important things.”