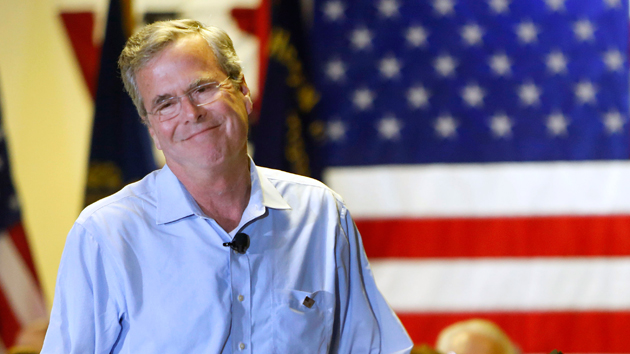 In one of the most Mitt-esque comments of the 2016 campaign (so far), Jeb Bush, a man who made millions through family and political connections, said on Wednesday that “people should work longer hours” in order to expand the US economy. Really? Stressed-out Americans, some juggling more than one job, ought to spend more time toiling at work? Bush was practically saying that 47 percent of Americans don’t take enough responsibility for the economic good of the nation.

Naturally, Dems and others pounced on this very 1-percent-ish remark. And Team Jeb—or as he might put it, Team Jeb!—rushed to the fire with pails of cold water, claiming that Bush had been talking only about underemployed part-time workers. One problem: in his original comment, Bush did not indicate he was only referring to part-timers who crave more hours. Oops.

Americans who do work are hardly lazing about. According to a 2014 Gallup poll, Americans employed full-time worked an average of 47 hours a week. Almost half worked over 50 hours a week. In fact, American workers spend more hours on the job than those in other large, industrialized nations, according to the Organization for Economic Cooperation and Development.

So telling them to work more is quite Romney-like. Maybe they should eat cake, too.

A few years ago, Mother Jones did a special report on the “Great Speedup”—the phenomenon in which greater productivity (some of it based on Americans working longer hours) yields higher corporate profits but not higher wages. The article included several charts highlighting the overworking of Americans. For Jeb Bush’s benefit, here are three of the most relevant: