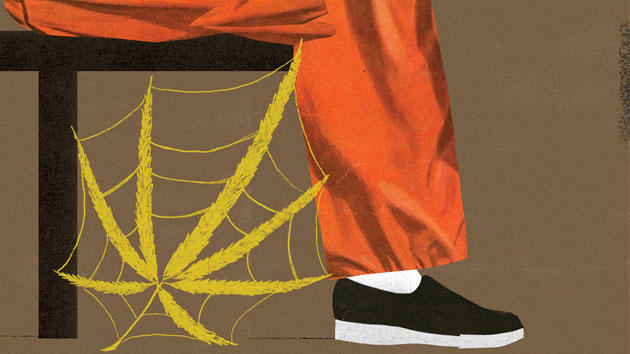 Editor’s note: In the next few weeks, President Obama is expected to commute the sentences of dozens of federal inmates behind bars for nonviolent drug offenses, according to the New York Times.

It’s just after 9 p.m. near the corner of Fourth and Marshall, a poor part of Shreveport, Louisiana. A homeless man approaches a guy on the street and asks him what he’s looking for. That guy, an undercover cop, says he wants “two dimes” and promises a $5 commission. And Fate Vincent Winslow, knowing that $5 buys a meal, if not a great one, agrees. Minutes after he returns carrying two crumpled bags of marijuana, worth $10 each, he’s in the backseat of a squad car. Three months later, Winslow is found guilty of selling a Schedule I Controlled Dangerous Substance. Another three months and the sentence lands: life imprisonment at hard labor with no chance for parole.

Winslow’s punishment—to die behind bars, for a transaction involving a minuscule quantity of pot—is hard to believe. But it’s not unique. Every year, more people are arrested for pot possession than violent crimes. Around 40,000 people are currently serving time for offenses involving a drug that has been decriminalized or legalized in 27 states and Washington, DC. Even as Americans’ attitudes toward pot have mellowed, the law has yet to catch up, leaving pot offenders subject to draconian sentences born out of the war on drugs. As David Holland, a criminal-defense attorney in New York City who filed a presidential clemency petition for marijuana lifers in 2012, puts it: “The world has changed, but these poor bastards are still sitting in jail.”

Writing from the notorious maximum-security Louisiana State Penitentiary in Angola, Winslow told me how he’d come to face “the great injustice that is upon me.” As a kid, he dropped out of high school and landed on the streets, “hanging with the wrong crowd.” At 17 he was convicted of simple burglary; he later got eight and a half years for rifling through an unlocked car. A decade later, he was caught with some coke. “I always had a job,” he writes—working in chicken plants, building houses. Yet his encounter with the undercover cop in 2008 branded him a habitual offender under Louisiana law, triggering an automatic life sentence. “Life for two bags of weed,” he writes. “People kill people and get five years.”

How many prisoners are serving life sentences for pot? At least 69, based on data collected by the American Civil Liberties Union and other organizations. But that figure probably is low, particularly if you count older inmates serving lengthy sentences who will likely die in prison. Federal judges have sentenced 54 people to life without parole for marijuana crimes since 1996, according to the Clemency Report. Solid numbers are hard to find. “Incarceration data for cannabis-only-related offenses is the holy grail of criminal-justice data for cannabis law reformers,” says Allen St. Pierre, the executive director of the National Organization for the Reform of Marijuana Laws, who has filed dozens of requests for this information. “All the time it seems like I learn of another one that I’d never heard of before,” says Cheri Sicard, vice president of the CAN-DO Foundation, an advocacy group for nonviolent drug offenders.

Among those serving life for pot are two more Angola inmates: Dale Wayne Green, who acted as a middleman selling $20 worth of weed to an undercover cop in 1999, and Terrance Mosley, who was riding with an acquaintance when police searched the car and uncovered two pounds of marijuana. Craig Cesal has served 13 years of a federal life sentence. He once repaired freight trucks, and served a company involved in high-volume marijuana trafficking. He says he never saw or handled the drugs, but was convicted of conspiracy to possess with intent to distribute thousands of pounds of marijuana. Like other lifers accused of similar crimes, he took his case to trial. “I had no idea I had done anything illegal,” the soft-spoken 55-year-old says on the phone from the Federal Correctional Institution in Greenville, Illinois.

Obama has granted  43 petitions for commutation, including one for a man serving life for growing more than 18,000 pot plants.

Many pot offenders are casualties of drug laws that may treat marijuana like hard drugs, as well as “three strikes” laws that do not distinguish between armed robbery and selling a dime bag. Even as then-Attorney General Eric Holder called for a move away from mandatory minimum drug sentences and once tough-on-crime lawmakers have come to embrace criminal-justice reform, these pot prisoners currently have few legal remedies. While some federal prisoners serving time for crack cocaine offenses can have their sentences shortened thanks to the 2010 Fair Sentencing Act, there’s been no similar retroactive reform of pot sentences. “Unless a law is created that specifically looks back in time, a person is stuck with whatever sentence they were given based on the laws that existed at that time,” explains Chris Lindsey, a legislative analyst at the Marijuana Policy Project. He has seen only one proposal to address pot prisoners whose crimes might result in lesser punishments today. “By default,” he explains, “we don’t rewind the clock and reevaluate existing sentences.”

For now, the sole hope of the marijuana lifers is clemency. But clemency, which generally may be granted only by the president or a governor, is rare. President Obama has granted just 43 petitions for commutation, including one for a man serving a life sentence for growing more than 18,000 pot plants. (This could change soon: President Obama is reportedly set to free dozens of nonviolent drug offenders locked up in federal prisons, potentially reducing more sentences in one stroke than any other president in recent memory.) Louisiana Gov. Bobby Jindal has granted just 47 clemencies.

“There is no life in prison,” Winslow writes. “Just living day by day waiting to die in prison.” So far, his handwritten appeals have gone nowhere. In the meantime, he says he spends “every day” praying and going to Angola’s law library, “doing everything I can to get out.”