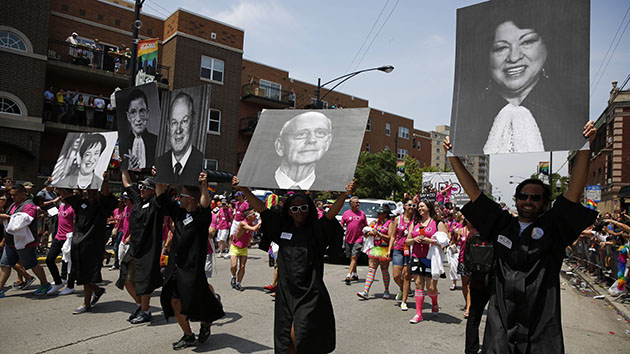 There’s no denying it: Last week was a great one for liberals. On Thursday, the Supreme Court rejected challenges that would have gutted two of the most important progressive laws of the past half-century, the Fair Housing Act and the Affordable Care Act. The next day, the court made history by legalizing same-sex marriage in every state, a triumphant end to a decades-long movement for marriage equality.

And it wasn’t just last week that had liberals celebrating. The court’s majority sided with its liberal wing in a number of key opinions in the past year, upholding a judicial campaign finance law and rejecting employment discrimination based on pregnancy and religion. “Defying the view that it’s entirely hostile to civil rights, the Court ruled time and again for the protection of equality,” David Gans, a lawyer at the liberal-leaning Constitution Accountability Center, a research and litigation group, wrote in The New Republic over the weekend.

It’s a trend that has caught some observers by surprise: Though the Supreme Court has been reliably conservative since Chief Justice John Roberts took over in 2005, this term it moved decidedly leftward. Using a widely accepted measure for categorizing the outcome of a case as liberal or conservative, the New York Times found that the 2014 term that ended on Monday was the court’s most liberal since 1969. The “recent numbers do seem suggestive of a shift,” concluded the Times story, which also featured a chart showing that the number of liberal opinions has ticked up modestly over the last three years. That’s a remarkable reversal, given the trend just a few years earlier: The court’s most conservative term in decades was in 2008, Roberts’ fourth year as chief justice.

But has the court really turned suddenly liberal? Zoom out for a broader view of its actions this past term, and the picture changes. Rather than liberal triumph, this court term may be better described as one of conservative overreach.

Take the two signature cases decided last Thursday. In the Affordable Care Act case, a 6-3 majority upheld the law’s subsidies in the 34 states with federally run health care exchanges—reaffirming the dominant view among legal scholars and the members of Congress who passed the law. Usually, the Supreme Court hears a case in order to resolve uncertainty among the lower courts. In this case, the Fourth Circuit had already upheld the subsidies. The DC Circuit was also set to rule on the subsidies, and many observers expected the same ruling, but the Supreme Court took up the case before the DC Circuit had a chance to conclude it. Though the Supreme Court’s ultimate ruling came down on the liberal side, the fact that the court agreed to hear this case at all was a departure from the usual routine of deference to lower courts and a sign that some of the justices were eager to relitigate what many experts considered to be an already settled matter.

The other case that came down on Thursday fits the same description: a major victory for liberals but a case that a less conservative court would have never taken in the first place. The question before the court in Texas Department of Housing and Community Affairs v. The Inclusive Communities Project was whether policies that unintentionally harm minorities—that is, have a “disparate impact”—are illegal under the 1968 Fair Housing Act. For decades, disparate impact has been an important tool in fighting entrenched residential segregation. Every court of appeals to take up the issue since the law’s passage has agreed that the FHA allows disparate impact claims. Congress implicitly acknowledged the legitimacy of disparate impact under the FHA in 1988 when it amended the law to include exceptions to disparate impact claims. And the Department of Housing and Urban Development issued a rule in 2013 making official its long-held policy of recognizing disparate impact claims brought under the law. In the end, Justice Anthony Kennedy sided with the liberals in the case, handing down an opinion that emphasized the importance of disparate impact in combating segregation. But a more liberal court would never have heard the case to begin with.

“Some of what we’ve seen this term is a reflection of case selection,” says Gans of the Constitution Accountability Center. “These are very far-reaching claims that conservatives are making in the cases they are bringing to the court,” he added, citing the fair housing and Obamacare cases. Although the court didn’t dismantle either law, the most conservative justices wanted to. In the housing case, the vote was just 5-4.

That much of the court’s caseload would become a conservative wish list—even if not all wishes come true—was predictable. In a 2009 paper, four political scientists laid out a simple theory that is being borne out this term. When the court leans conservative, as it does now, conservative interests sense that the court is more sympathetic to their views and choose to appeal more cases up from lower courts. Meanwhile, liberal interests try to stay away from the Supreme Court when possible, knowing the odds are stacked against them. So the cases coming to the Supreme Court invite conservative rulings, and the right-leaning court is more eager to make them.

But there’s a catch, says Kevin McGuire, a co-author of the study and professor at the University of North Carolina at Chapel Hill. “The rub is that, when all those conservative interests bring their cases to the court, they will sometimes overestimate the court’s conservatism,” he says. “The result is that the court ends up upholding those liberal lower court decisions.”

The housing case is a perfect example of this phenomenon. This was the third case in three years that the Supreme Court agreed to hear on the issue of disparate impact under the FHA. Clearly, conservative justices wanted to take up the issue, and conservative interests wanted to give them the opportunity. Ultimately, they overestimated how far Kennedy was willing to go and lost by one vote.

Likewise, the Obamacare case “is a nice example of what we meant by overreach,” says Georg Vanberg, another co-author of the study and a political scientist at Duke University. “They overestimated how conservative, in fact, especially Kennedy is on this issue.”

Vanberg also cautions that sometimes a liberal outcome is actually further to the right than people realize. One example is the first Obamacare case that the Supreme Court heard, in 2012, over the law’s requirement that people buy health insurance. Liberals prevailed and the law survived. But Roberts’ majority opinion, which upheld the individual mandate as a tax, narrowed Congress’ power to regulate commerce and made participation in the expansion of Medicaid, one of Obamacare’s most critical provisions, optional. Millions of people lack health insurance as a result. Even Kennedy’s opinion legalizing gay marriage falls into this camp, Vanberg says. Kennedy could have stipulated that laws discriminating against LGBT individuals must be weighed against a high legal standard, giving gay rights advocates a powerful tool to fight other forms of discrimination beyond marriage. But he opted not to.

The conservatives groups who bring these cases have reason to be optimistic that they will often prevail before the Roberts Court. After all, this is the court of Citizens United v. FEC, which opened the door to unlimited independent election spending, and McCutcheon v. FEC, which removed the caps on the amount of money wealthy donors can give to parties and campaigns. It’s the court that struck down widely accepted school desegregation plans and gutted the Voting Rights Act of 1965, two cases that likewise lacked a lower court disagreement for the Supreme Court to resolve. It’s also the court that last year turned corporations into people with religious feelings in the Hobby Lobby case about access to birth control.

Like conservative interest groups, the conservative justices likely overestimate their own colleagues’ willingness to move case law to the right. It takes four justices to vote to hear a case but five to win the case. Sometimes the court’s conservatives—Justices Antonin Scalia, Clarence Thomas, Samuel Alito, and Chief Justice Roberts—lose Kennedy’s swing vote and fall short. In 2012, the court took up a challenge to the use of race as a factor in admissions decisions at the University of Texas-Austin, yet another case without a lower court split that was seemingly taken up in order to overturn precedent. According to reporting by Supreme Court chronicler Joan Biskupic, the conservative justices were poised to strike down the Texas plan when Justice Sonia Sotomayor circulated a blistering dissent that caused Kennedy to waver. Ultimately, Kennedy authored a narrow ruling that left precedent on affirmative action intact.

But perhaps not for long. After the justices sent Fisher v. University of Texas back to the 5th Circuit for a rehearing in 2013, the plaintiffs returned to the Supreme Court for another review, and in a surprise move, the Supreme Court on Monday agreed to hear the case. At least four justices still have their sights set on affirmative action.

The Fisher case isn’t the only one next term that demonstrates the Roberts Court’s willingness to revisit established precedent, and potentially to strike it down. On Tuesday, the court agreed to hear a case that could severely weaken public-sector unions—a case crafted by a conservative legal group and seemingly brought in order to reach the Supreme Court. Liberals may win these cases, or they may not. Either way, the fact that the court is taking the cases at all reveals as much as its actual rulings about its conservative leanings.