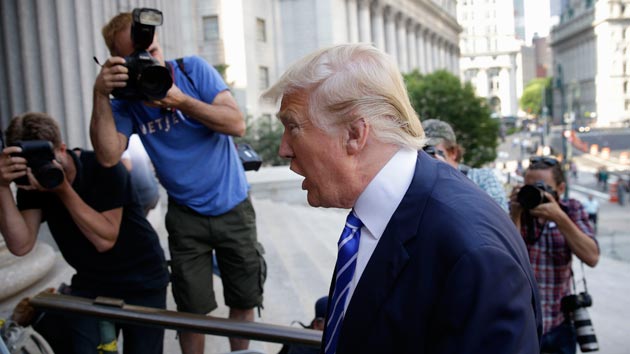 Celebrity tycoon and GOP presidential front-runner Donald Trump arrived at a courthouse in Manhattan on Monday morning to report for jury duty. He pulled up in a limo and fist bumped bystanders on his way into the State Supreme Court. Last week, at a rally in New Hampshire, Trump said he would willingly sacrifice valuable campaign time to answer his jury summons.

But prior to professing his commitment to civic responsibility, Trump has perennially skipped out on jury summonses in the past.

Trump’s attorney Michael Cohen confirmed to CNN that Trump has missed five jury summonses over nine years. But Cohen claimed that Trump was not shirking his civic duty. The summonses, he said, were delivered to the wrong address.

“You gotta serve it to the right property,” Cohen said. “I believe he owns the building but he doesn’t reside there, and nobody knows what happened to the document.”

It’s true that master jury lists are often outdated; an address mix-up is feasible. But in general, wealthy individuals are usually more likely to report for jury duty. Lower-income people often cut out due to the various economic pressures that come with jury duty: time off from work, reduced pay (in most states, jury pay is less than $50 a day), and child care needs.

Because he made it to the courthouse today, CNN reports, Trump will not have to pay the $250 fine he was facing for previous failures to appear. It’s doubtful the threat of such a fine compelled him to show up. But a cynic can certainly wonder what will happen the next time he is called to jury duty when he is not a presidential candidate.