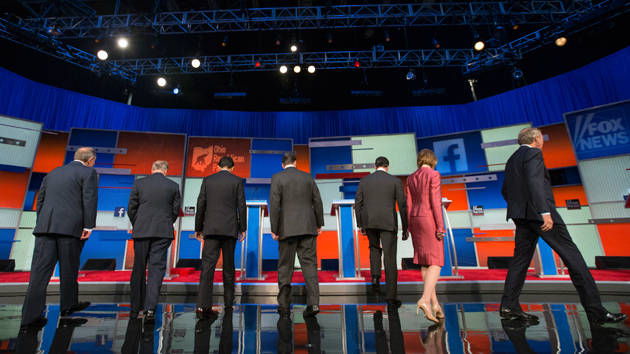 But if the Fox News moderators ever considered taking it easy on the Republican also-rans, they didn’t show it. Instead, Bill Hemmer and Martha MacCallum appeared focused on whittling down the weak links in the 17-person field by asking them—over and over and over again—why no one seemed to like them.

Here were the first seven questions of the debate:

Perry: “Welcome, governor. You were in charge of the fourth-largest economy in the world. And you recently said that four years ago you weren’t ready for this job. Why should someone vote for you now?”

Fiorina: “You were CEO of Hewlett Packard. You ran for Senate and lost in California in 2010. This week you said, ‘Margaret Thatcher was not content to manage a great nation in decline, and neither am I.’ Given your current standings in the polls, was the Iron Lady comparison incorrect?”

Santorum: “Sen. Santorum, you won the Iowa caucus four years ago and 10 other states, but you failed to beat Mitt Romney for the nomination. And no one here tonight is going to question your conviction or love for country, but has your moment passed, senator?”

Jindal: “Gov. Jindal, you’re one of two sitting governors on the stage tonight. But your approval numbers at home are in the mid-30s. In a recent poll in which you were head-to-head with Hillary Clinton in Louisiana, she beat you by seven points. So if the people of Louisiana are not satisfied, what makes you think the people of this nation would be?”

Graham: “Sen. Lindsey Graham. You worked with Democrats and President Obama when it came to climate change, something that you know is extremely unpopular with conservative Republicans. How can they trust you based on that record?”

Pataki: “Gov. Pataki. Four years ago this month, you called it quits in a race for the presidency in 2012; but now you’re back. Mitt Romney declined to run this time because he believed that the party needed new blood. Does he have a point?”

The hits kept coming after the opening round. When the subject turned to Donald Trump, the Fox News moderators took a few more opportunities to twist the knife. “So Carly Fiorina, is he getting the better of you?” the former California Senate candidate was asked. Perry came in for the same Trump treatment—”Given the large disparity in your poll numbers, he seems to be getting the better of you.”