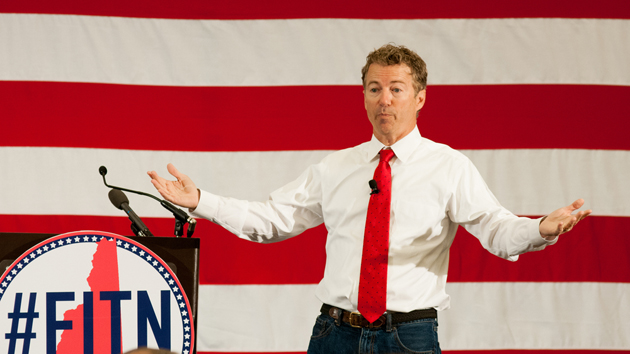 It had to happen: anti-Trump attack ads from the GOP side. One of the first Rs to launch a torpedo at the tycoon topping the polls is Sen. Rand Paul, the libertarian-ish Kentucky Republican whose campaign has yet to gain traction. In what can be taken as a sign of frustration—or desperation—this week Paul released a commercial assailing Donald Trump. The ammo is nothing new, with the spot focusing on old Trump statements and positions that ought to tick off Republicans. It shows Trump calling Hillary Clinton a “terrific woman” and remarking (in 2004) that he identified more as a Democrat than a Republican. Trump responded by pooh-poohing the attack, once again saying his views have evolved. And he added a dig at Paul: “Recently, Rand Paul called me and asked me to play golf. I easily beat him on the golf course and will even more easily beat him now, in the world in [sic] the politics. Senator Paul does not mention that after trouncing him in golf I made a significant donation to the eye center with which he is affiliated.”

It’s doubtful Paul is going to score many points with the ad. After all, of the GOPers running for president, Paul has perhaps the longest list of troublesome past comments, and he’s the most likely to be accused of heresy. For instance, he repeatedly asserted that Dick Cheney, as vice president, pushed for the Iraq War so Halliburton, the megamilitary contracting firm Cheney once led, would bag billions of dollars in profits.

Paul even once took a position similar to one of the Trump quotes in this new ad. His get-Trump spot excoriates the celebrity billionaire for having previously declared, “The economy does better under the Democrats than the Republicans.” Yet Paul used to repeatedly insist that President Jimmy Carter was better on the federal budget than President Ronald Reagan.

Last year, I reported on Paul’s habit of dumping on Reagan, noting that when Paul stumped for his father’s presidential bid in 2008 and ran for Senate in 2010, he routinely asserted that Carter had a better record on fiscal discipline than Reagan. So Paul was fine with criticizing the GOP when he was campaigning for or as a libertarian maverick. But now that he’s struggling to find his footing in the Republican presidential contest, he’s eager to attack Trump’s supposed blasphemy.

Here are the relevant portions of my reporting from last year:

In a variety of campaign appearances that were captured on video, Paul repeatedly compared Reagan unfavorably to Carter on one of Paul’s top policy priorities: government spending. When Paul was a surrogate speaker for his father, then-Rep. Ron Paul (R-Texas), during the elder Paul’s 2008 presidential quest, his sales pitch included dumping on Reagan for failing to rein in federal budget deficits. Standing on the back of a truck and addressing the crowd at the Coalition of New Hampshire Taxpayers picnic in July 2007, Rand Paul complained about Reagan and praised his father for having opposed Reagan’s budget:

The deficit went through the roof under Reagan. So how long did it take Ron Paul to figure out that the guy he had liked, endorsed, campaigned for, campaigned for him? The very first [Reagan] budget. Ron Paul voted “no” against the very first Reagan budget… Everybody loved this “great” budget. It was a $100 billion in debt. This was three times greater than Jimmy Carter’s worst deficit.

Paul’s speech apparently worked. His father won the straw poll held at the picnic, collecting 182 of the 294 votes cast, or 65 percent.

Appearing at a Montana GOP event in January 2008, Paul touted his dad’s conservative credentials—remarking that the elder Paul had even voted against gun safety measures backed by the NRA—and pointed out that deficits had mounted under Reagan and President George H.W. Bush: “Domestic spending went up more rapidly in the ’80s than it did under Carter.” And he took this swipe at Reagan:

You know, we wanted Reagan to veto a budget or to have balanced budgets and he didn’t do it. And it wasn’t anything personal against him. I think his philosophy was good. I just don’t know that he had the energy or the follow-through to get what we needed.

As a Senate candidate the following year, Paul continued to bad-mouth Reagan. Speaking at the University of Kentucky to Students for Liberty that spring, he noted that he and other small-government advocates had “high hopes” for Reagan that were “fairly quickly” dashed. “A lot of the things that we believed would happen didn’t,” Paul said. He explained:

People want to like Reagan. He’s very likable. And what he had to say most of the time was a great message. But the deficits exploded under Reagan. The Democrats said, “Well, the deficit’s going up because you reduced the tax rates and supply side economics doesn’t work.” But the interesting thing is, if you look at the numbers, tax rates went down in the early ’80s, tax revenue did rise. The reason the deficits exploded is they ignored spending. Domestic spending went up at a greater clip under Reagan than it did under Carter.

A few weeks earlier, talking to student Republicans at Western Kentucky University, Paul pointed to the dramatic rise in deficit spending under President George W. Bush and declared that Republicans had “become hypocrites” on spending and the deficits. GOPers, he maintained, had not “truly become fiscal conservatives.” He added, “We haven’t followed through on the message of fiscal conservatism that we said we had.” And he traced the problem back to Reagan:

Some say, well that’s fine, but there were good old days. We did at one time…When we had Reagan, we were fiscal conservatives. Well, unfortunately, even that wasn’t true. When Reagan was elected in 1980, the first bill they passed was called the Gramm-Latta bill of 1981, and Republicans pegged it as this great step forward. Well, Jimmy Carter’s last budget was about $34 or $36 billion in debt. Well, it turns out, Reagan’s first budget turned out to be $110 billion dollars in debt. And each successive year, the deficit rose throughout Reagan’s two terms.

And, he told the students, don’t venerate Reagan merely because he was a conservative: “Why did the deficit rise [under Reagan]? Because spending rose more dramatically under Reagan than it did under Carter. Well, you say, ‘Reagan’s a conservative, Carter’s a liberal.’ Not necessarily always what it seems.”

Speaking two months later to the Carroll County Republican Party, Paul forecasted that economic doom was soon to come—”1979 on steroids”—and advised that “everyone should have a percentage of their savings in gold,” noting it was possible that the United States could experience a “complete catastrophe” like the hyperinflation of the Weimar Republic. “I would be prepared,” Paul said. “There’s a coming calamity possibly.” Then he turned to a critique of the Republican Party:

As Republicans, it’s been very easy for us to say we’re fiscally conservative and we’re for balanced budgets. It’s never happened. We were in charge in the Reagan term, the next Bush’s term, this last Bush. The deficits were horrendous under the Republicans…During Reagan’s two terms, domestic spending went up faster than Jimmy Carter.

That same month, when he was addressing a gathering of local conservatives in Lexington, Kentucky, Paul contended that being only “a little bit conservative” was not sufficient and that his party, partly because of Reagan, had lost its credibility on fiscal matters:

We live in such bad times that if you don’t have somebody who truly believes that we need to take an ax to government, you’re not going to get anything done…Even when we elected Reagan. A lot of us loved the rhetoric of Reagan. My dad supported Reagan in 1976 when only four US congressmen would stand up for him. The deficit still exploded…The deficit exploded because domestic spending rose faster under Reagan, so did military, but domestic spending rose faster under Reagan than under Jimmy Carter…We have to admit our failings because we’re not going to get new people unless we become believable as a party again.

These days, Paul, who is stuck in a civil war within the GOP over foreign policy issues, is trying to Reaganize himself and demonstrate that he’s not outside the Republican mainstream. (His Senate office did not respond to requests for comment.) But not long ago, Reagan was a foil for Paul, who routinely pointed out that the GOP’s most revered figure actually had been a letdown. It’s no surprise that denigrating Ronald Reagan—and commending Jimmy Carter—is no longer common for Paul. Such libertarian straight talk would hardly help him become one of the successors to the last Republican president who retains heroic stature within the party Paul wants to win over.