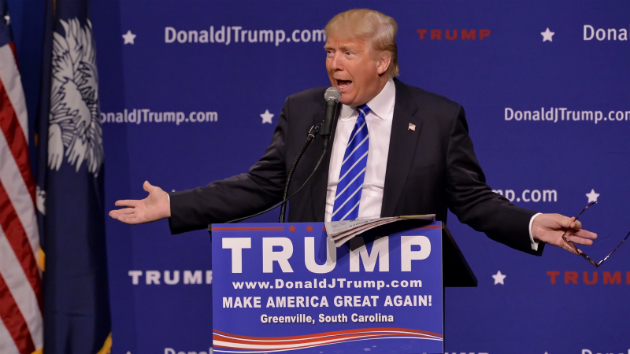 Putting to rest GOP concerns about a possible independent run by reality television tycoon Donald Trump, Republican party insiders say that the frontrunner in their presidential contest has agreed to sign a loyalty pledge, promising to back the party’s eventual nominee and not mount an outside effort.

The benefit for Trump is that it removes a line of GOP attack against him. The move signals he is a serious candidate who plans to stay in the race and is not campaigning on a lark. But is Trump the deal-maker pulling a fast one? After all, the actual pledge looks neither legal nor binding.

If there’s one guy who knows about how to escape from or alter a contract, it’s Trump. He has sued many people on assorted grounds, attempting to hold others liable for questioning his wealth, for insulting a building that he considered building (but didn’t), and for allowing airplanes to be loud. (That’s just a partial list.) Since he announced his candidacy, Trump has lost a number of business partners, and he has sued most of them. He sued celebrity chef Jose Andres for $10 million after Andres, an immigrant who recently became a US citizen, pulled out of a plan to build a restaurant in Trump’s new Washington, D.C. hotel. Trump also launched a $500 million lawsuit against Univision for dropping the Miss Universe pageant.

And watch out, GOP;  the number of successful lawsuits against Trump for breaching contract are surprisingly few. In 2013, an 87-year-old Illinois woman accused Trump of making false promises concerning investment possibilities regarding a Chicago condo tower he was developing. During his testimony, Trump seemed to enjoy the contentious exchanges with the plaintiff’s attorney and deftly sidestepped demands for information about the construction of the building. According to the Chicago Tribune:

“(The judge) told the chatty Trump to narrow his responses and stick to the questions asked of him. She told (the plaintiff’s attorney) to simplify his questions about the complicated condo deal at the heart of the dispute.

“I’m going to give you both time to catch your breath,” the judge said. “… Do you think the jury likes this? If you do, I can tell you they don’t.”

Over the two days of testimony, Trump dodged and weaved, trying to distance himself from specific knowledge of the condo development plans, often trailing off into lengthy observations about his many hotels. Trump also took every opportunity he could to tell the jury that a clause in the contract allowed him to change plans and that (the plaintiff) had asked for that right to be removed. Yet her request was refused, and she bought two condos anyway, he said.

“And then she sued me! Unbelievable!” he said, his voice rising as he lifted his arms and grimaced in a moment reflective of the Trump the nation has come to know from his network TV reality show.”

Trump’s attorneys argued that the woman was actually a sophisticated investor and should have known that Trump might change the terms of the agreement. He won.

Republicans ought to remember that during the 1992 presidential contest, billionaire H. Ross Perot, after ending an independent bid, said he was out of the race, but then he changed his mind shortly before the election in October. Perot never garnered enough support to have a shot at winning, but he drew 19 percent of the general election vote, and many analysts believed this assured Bill Clinton’s defeat of President George H.W. Bush.